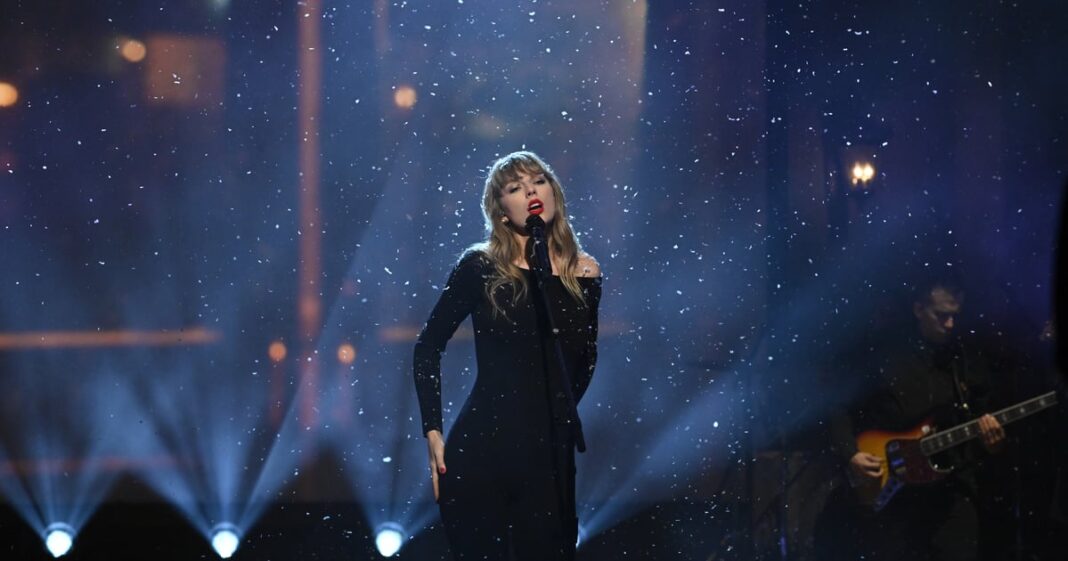 For insomniacs, every night has a turning point. It’s the point where, if you’re still lying awake in bed, something shifts: everybody else in the world seems to be asleep, and you’re left alone with yourself. In my experience, that point usually comes around 3 o’clock in the morning. Memories resurface, and suddenly emotions — both positive and negative — feel heightened.

As someone who has never found it easy to fall asleep, I’m quite familiar with that turning point, and apparently, so is Taylor Swift. In “Midnights,” she returns to her classic diaristic introspection to explore that surreal time of night. The album, in her words, chronicles “13 sleepless nights scattered throughout my life.” (The deluxe version — the “3am Version” — adds seven more sleepless nights to that number.)

Compared with Swift’s decidedly less personal recent albums “Folklore” and “Evermore,” “Midnights” marks a departure. From dizzying portrayals of what it feels like to fall in love to the more obsessive, darker places your mind can go during a sleepless night, Swift finally invites us to go on another intimate journey with her.

Of course, Swift has always been an exacting artist, both in terms of her own image and her art. From her privacy about her relationship with Joe Alwyn to her decision to rerecord her masters, much of Swift’s public narrative has centered on the desire for control. On “Mastermind,” the final track of the original 13-track version of “Midnights,” Swift even confesses that she orchestrated the beginning of her relationship.

It makes sense that that kind of obsessiveness leads to overthinking and insomnia. At least for me, sleepless nights tend to make it easy to hyperfocus on issues that are easier to brush off during the day.

But “Midnights” mainly dwells on one of the more pleasant kinds of late-night obsessions — the kind that strikes when you’ve just gone on an amazing first date or realized you’re actually deeply in love with someone who maybe even loves you back. Swift dives headfirst into that feeling on “Lavender Haze” and “Midnight Rain,” which capture that fizzy electricity through sound. “Paris” and “Snow on the Beach” both reflect what is, in my experience, the hallucinatory quality of lying awake while you’re in love, unsure how to contain or express your feelings yet unable or unwilling to let them go.

The lavender haze does, eventually, have to dissipate. Swift has talked about her personal insecurities before, but never as intimately as she does on “Midnights,” opting for startlingly candid confessionalism on “Anti-Hero” in particular. In an Instagram video, she primed fans for the song, saying it’s about “everything I tend to hate about myself.” In the track, she airs out a laundry list of grievances — body-image issues, people she’s ghosted, fears that loved ones will leave — and these themes reappear again on the slightly dreamier “Bigger Than the Whole Sky.” These songs dive into the somber side of insomnia, the part where you can’t sleep because you’re ruminating on regret and self-loathing.

Swift never dwells there for too long, though. She takes time to air out her grievances with others on songs like “Karma” and “Vigilante Sh*t,” which some fans think could reference Scooter Braun and Scott Borchetta or Kim Kardashian and Kanye West. She flaunts her own self-confidence while revealing its cracks on “Bejeweled” and explores her regret about a past relationship on “Question…?”

In my personal experience, a single night of insomnia can take you through all these feelings, sometimes over and over, but Swift spends her time with each of them, using her laser-like focus to explore each one.

For all its obsessiveness, “Midnights” is less refined than some of Swift’s previous work. The music is also less interesting than its predecessors’ — some of the drum machines and arrangements feel phoned in and derivative. Still, producer Jack Antonoff does what he does best here, too, adding beautifully panned synthy flourishes and intricate details like trippy reverb, which both appear on “Dear Reader,” the dreamy final track to the “3am Version.”

Swift’s lyricism here also may not be as strong as her previous offerings. But in my experience, the thoughts we obsess over while we can’t sleep often aren’t our wisest or most novel insights. Whenever I’m trying to figure out my life in the middle of the night, I try to remind myself that I’ve never made a great decision at 3 a.m.

Ultimately, “Midnights” embodies that 3 a.m. territory where obsessive desperation reigns over revelation. It also paints a picture of an artist whose overly analytical mind — which fixates on the past, elevates daily events into grand narratives, and studs all of her releases with Easter eggs for her fans — is also her greatest asset.

Going on this sleepless journey with her made me remember that not only am I not alone in my solitary late-night adventures, but I also have the ability to transmute those experiences into something else. It’s far too easy to turn self-critical when an insomnia attack strikes, particularly when you’re obsessing over something (or someone) you wish you weren’t. But sometimes, the best thing to do with insomnia is to embrace it and dive into the feeling — and if there’s one thing Swift doesn’t do on “Midnights,” it’s shy away from the thickets of her tangled late-night emotions.

At one point, I was prescribed sleeping pills for my insomnia. I suddenly found that I was no longer lying awake, replaying every mistake I made that day. But eventually, I started to feel like I was missing something.

A songwriter myself, I suddenly became less creative, and despite sleeping more, I felt less clear and awake. Of course, I knew that good sleep is critical for health and well-being, but I also realized that maybe the liminal space between lying down in bed and falling asleep is a part of who I am. So eventually, I got rid of the pills, started a bedtime ritual involving meditation and no electronics, and vowed to embrace my sleepless tendencies.

A few days ago, I found myself watching the sun’s first rays sliding through the window. I thought about “Midnights” and crept out of bed to write a song. When I was done, the birds were starting to sing while the song replayed in my head. I crawled back in bed, and finally fell asleep.