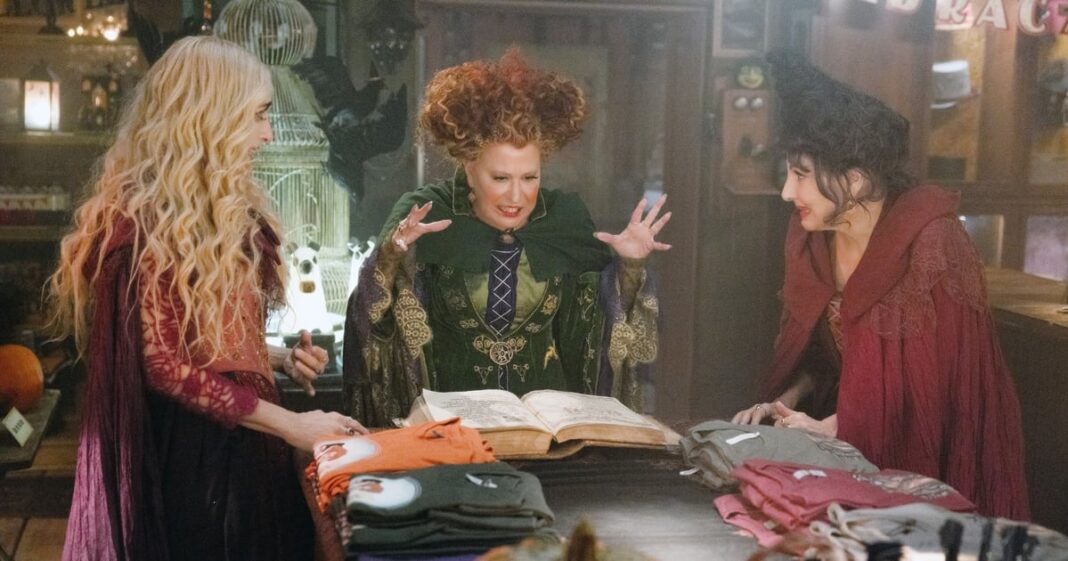 Whenever the leaves begin to turn red and orange, a certain subset of the population immediately dons colorful capes, dusts off their cauldrons and spell books, and starts preparing to rewatch “Hocus Pocus.”

Since the Sanderson sisters first burst onto the scene in 1993, they have remained some of the most famous witches around — and they’ve shaped many kids’ earliest encounters with the occult. On Sept. 30, the sisters re-emerged to terrorize Salem in “Hocus Pocus 2,” sparking a new flurry of “Hocus Pocus” fever.

But while some people only pull out their witch hats when autumn rolls around for the purpose of a Halloween costume, other folks spend the whole year practicing various forms of witchcraft and magic.

Cynthia, a 66-year-old from central New York who describes herself as an eclectic or kitchen witch, tells POPSUGAR that she “liked the portrayal and the understanding of the witches much better” in the “Hocus Pocus” sequel than in the first movie largely thanks to its flashback opening. In its first few minutes, viewers learn that Winifred Sanderson (Bette Midler) actually turned to witchcraft in order to escape a marriage she didn’t want.

“In the beginning, you get to see that these three basically orphaned children have been pretty much assaulted by the church,” Cynthia says. “The idea that the 16-year-old girl is now too old to be unmarried and is going to be forced to marry somebody that she has no interest in marrying — and she’s still essentially a child herself — would certainly result in a lot of bitterness and anger. That kind of rage does tend to play itself out in negative ways.”

Throughout the first movie, witchcraft is associated with child-eating and evil. But right off the bat, the sequel reveals that witchcraft initially represents freedom for the Sanderson sisters, who are orphaned and cast out of society when they encounter the Mother Witch (Hannah Waddingham). “They come into this forbidden part of the forest and are greeted by this beautiful, powerful woman who was like, ‘Oh, you’re like me? Let me give this to you for your 16th birthday,'” Cynthia says. “All of a sudden, they had the means to avenge themselves of a terrible injustice.”

Oregon-based park ranger Melissa, 33, echoes her thoughts about the flashback. Melissa describes herself as a goblincore witch — “to use the modern terminology,” she says. Her practice, to put it very simply, includes working with nature, found objects, and the elements.

“By giving the Sanderson sisters just the tiniest sliver of flashback origin story, they now can be fully realized people,” she says. “Their actions make sense, given the life they have led. That’s important. They’re still children-eating witches. But they are a product of the patriarchy in Salem.”

Even with their new backstory, the sisters are still very much the movie’s villains. Though none of the witches interviewed for this article had a problem with the first film, which they all viewed as a fun, fluffy piece of entertainment, its depiction of witchcraft as evil has ruffled some feathers over the years. “That portrayal of witches, looking back on it, is very much as mythological fairy-tale creatures . . . and monsters in the woods,” Melissa says of the first movie. But that, she says, “doesn’t encapsulate a lot of people’s religion.”

Fortunately, the sequel works to correct witchcraft’s association with evil by giving teen protagonist Becca (Whitney Peak) magic powers of her own, which she uses to save the town. “What I like about ‘Hocus Pocus 2’ is that the heroes are also witches,” Melissa says. “Witchcraft is not the villain.”

According to Joe, a 35-year-old traveling occultist who specializes in the tarot, the fact that witchcraft is portrayed in both a positive and negative light in the sequel actually makes a surprisingly nuanced point about the nature of magic itself. “Magic is not a bad thing or a good thing,” he says. “It really comes down to what your intention is. It’s not evil or virtuous. It’s just a thing that bad or good people can use to do what they want. In the hands of good people, it’s a good thing. I feel like [the movie] does a good job of presenting it that way.”

The question of whether witchcraft is good or evil misses the point, Joe says — and so does asking if the magic in “Hocus Pocus 2” is accurate or inaccurate. “That’s just not what magic is about,” he says. “Magic and creativity and storytelling are very closely linked. They’re all just metaphors and symbolism.”

He felt that the movie’s ending contained its most profound metaphors of all. In the film’s conclusion, Winifred finds herself unable to reap the benefits of the power spell she’s been working toward because it requires her to give up what matters the most to her — her sisters. She winds up sacrificing everything so they can all be together again.

“I’ve always kind of felt like witchcraft and magic [are] really [about] focusing on and emphasizing your community and your connections to people,” Joe says. “I was really caught off guard when the Sanderson sisters lost, and it turned out that what ended up mattering — even to the main evil villain in the movie — was her sisters. She was willing to throw everything else away that she’s been fighting for, for the whole movie, to just maintain that connection. I thought that was actually very much what magic is about.”

Cynthia notes that at the end of the movie, the witches aren’t “turned to stone or destined for hell.” Instead, they gently disappear — and Winifred joins them after learning that the power spell requires her to give up her sisters. “She realizes that without them, this wasn’t worthwhile,” she says. “I thought that humanized them — made them less ridiculous, if you will. It was a positive ending to a very sad and unfair existence.”

Melissa appreciates the ending’s emphasis on witchcraft’s communal aspect. “We have three girls coming into their own power, realizing the effect that shared power can have on the universe,” she says, referencing the fact that Becca learns she needs her best friends’ help to make her magic the most powerful it can be. Witchcraft, Melissa believes, is about “finding a systematic way to ask the universe to help and to direct that to achieve your goals. I do believe that the universe is a balanced, interconnected thing,” she adds. “You shouldn’t seek to do harm against others, because that will harm you in the long run.”

By showing that seeking out absolute power means you’ll probably have to make an impossible sacrifice that will make that power worthless in the end, “Hocus Pocus 2” clearly delivers some surprisingly deep — and perhaps genuinely magical — messages. Of course, it’s also a whole lot of fun, from its wild musical sequences to its many hidden references to the first movie. (“I do believe Cobweb is a Binx descendant,” Melissa insists.)

“Hocus Pocus 2” is now streaming on Disney+. The original “Hocus Pocus” is currently airing as part of Freeform’s 31 Nights of Halloween.