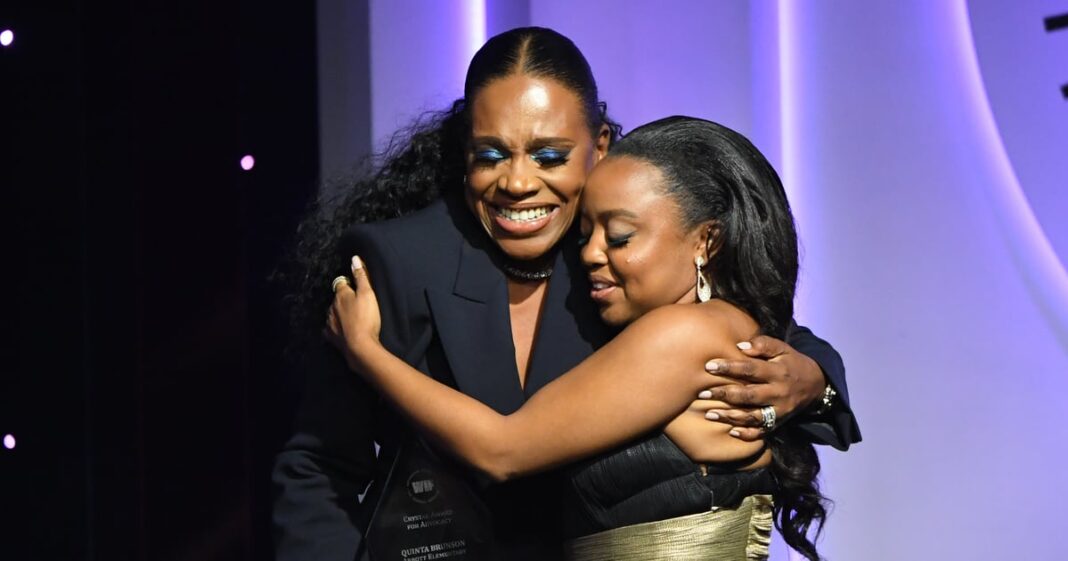 Painful pasts and the path forward were central to the 2022 WIF Honors last Thursday. Held at a ballroom bathed in magenta at the Beverly Hilton in Los Angeles, the annual event honors the accomplishments of women in the entertainment industry. This year, honorees included “Abbott Elementary” creator Quinta Brunson, “The Woman King” director Gina Prince-Bythewood, and “Don’t Worry Darling” director Olivia Wilde.

The ceremony began how all ceremonies should: with Jane Fonda. The veteran actor, who last month disclosed her cancer diagnosis, was met with a standing ovation. Fonda was there to present the second-ever Humanitarian Award, named in her honor, to Michaela Coel, whom she described as a “boundary-pushing” artist who “makes us think about hard stuff in new ways.” Fonda personally picked Coel and was an early champion of her seminal show “I May Destroy You.”

Coel is currently on a marathon “Black Panther: Wakanda Forever” press tour and was sadly unable to accept the award in person. Instead, Lake Bell read aloud a letter from Coel addressed to Fonda. “Your recognition did so much for its global reach, and more for my mum’s sense of pride in me than anything I could have ever done,” the letter read. “For that, I can never repay you.”

Coel’s “I May Destroy You,” which earned her an Emmy, was loosely based on her own experience of sexual assault. “Through serving my pain, I seem to have served yours,” Coel wrote in her letter. “It is a strange, beautiful, and cosmic dance between us.”

The issue of sexual misconduct in the entertainment industry loomed over the event, as did the fight for reproductive rights. WIF CEO Kirsten Schaffer expressed her concerns on the red carpet. Regarding this year’s “forging forward” theme, Schaffer told POPSUGAR, “there’s a lot of regression happening right now, so we’re bringing the community together to empower people to keep moving forward.” She noted that calls to the organization’s help line have doubled in the last month. “We’re not done,” Schaffer added.

The five-year anniversary of the #MeToo movement was also a topic of discussion. Among the recipients of the Crystal Award For Advocacy was the team behind “She Said,” the upcoming adaptation of Jodi Kantor and Meghan Twohey’s book about their Harvey Weinstein exposé. The New York Times journalists — as well as was “She Said” star Carey Mulligan and producer Dede Gardner — were all in attendance to receive the award and sit for the panel discussion that accompanied each presentation.

“We were outsiders,” Kantor said, “but people here, including people in this room, did help us.” In the room were three Weinstein accusers: Sarah Ann Masse, Katherine Kendall, and Lauren O’Connor, who were asked to stand as the room applauded. Masse and Kendall both also appear in “She Said.” These days, Masse, who accused Weinstein of sexual misconduct in 2017, helps survivors like herself seek opportunities — and find cover from retaliation — through her Hire Survivors Hollywood initiative. Though she is hopeful for the future, Masse doesn’t believe there’s been enough “tangible change” in the industry yet. “We’re moving in the right direction, but we need to not have mission drift,” she told POPSUGAR.

She also emphasized the need to create a safe environment for victims to come forward. “I took almost a decade to come forward because of the fear that surrounded it and my worries of retaliation, and then they happened. Even after everything, I still faced retaliation,” she said. “People need to remember there is a real risk, and a real loss.”

At this very moment, Weinstein is on trial in Los Angeles. (The disgraced film producer is already serving a sentence of 23 years in prison after being convicted of sex crimes in his 2020 trial in New York.) Masse said she’s following the LA trial in which Weinstein has pleaded not guilty to multiple charges of rape and sexual assault: “I know some of these women personally, I know their stories personally, and they need our support. They need to know that we’re behind them. This has been a long slog for a lot of people, and it’s not over yet.”

Reflecting on the #MeToo anniversary, “Luckiest Girl Alive” author Jessica Knoll said she has noticed a “shift” in the last five years. She recently adapted her 2015 novel into a film for Netflix, and the story follows a magazine editor who unsuccessfully attempts to erase from memory her high school sexual assault. A year after the novel was published, Knoll came forward about her own similar experience in an essay for Lenny Letter. “The world really responded to that essay in kind, which for me was in stark change from how people reacted 17 years ago at the time of my assault,” Knoll told POPSUGAR. “I felt a shift in the world.”

As much as the past was pored over, the future was also celebrated at the WIF Honors. Lili Reinhart received the Max Mara Face of the Future Award. In her acceptance speech, the “Riverdale” actor reflected on her commitment to being outspoken about mental health and body-image issues. “Soon enough, I started noticing a lot of negative attention on Twitter, which, let me tell you, there is nothing more terrifying than seeing your name trend on Twitter,” Reinhart said. “I found out the hard way that a lot of people didn’t hear what I had to say.”

Reinhart rattled off some of the criticism she receives: “Damn, all this girl ever does is complain, or can she keep her mouth shut for once?” Her answer, she said, “has been and always will be, absolutely not.”

Viola Davis offered one of the evening’s most rousing speeches. In her tribute to her “Woman King” director, Davis recalled Prince-Bythewood crying in their first meeting about the film. “I knew that in the weeping, she would be a good steward over this film,” Davis said. “This film required a freaking warrior.” At one point, Davis recited a stanza from “O Captain! My Captain!” by Walt Whitman.

In the panel discussion that followed, Davis was joined by her “Woman King” costars Thuso Mbedu and Lashana Lynch, who praised Prince-Bythewood for her presence at every phase of production, from auditions to Muay Thai classes. “She was always there, championing us,” Mbedu said. The room later erupted in applause when Lynch name-dropped Prince-Bythewood’s directorial debut, “Love & Basketball.”

Collaboration, in addition to leadership, was celebrated. This was stressed by Wilde and her creative partner, Katie Silberman, who wrote the “Don’t Worry Darling” screenplay. The pair previously worked on “Booksmart” together, and in the pipeline is a mysterious Marvel project rumored to take place in the Spider-Verse. “Nobody makes you braver than a friend,” Silberman said during their panel.

Wilde, meanwhile, encouraged the room to lean on others for help. “The hero narrative of directors is complete bullsh*t. No director ever does it on their own, ever,” Wilde said. She later added, “Let’s use the community. Let’s use each other. . . . We’re all trying to do this together. It still feels like we are so isolated, and the men don’t feel that way.”

The cast of “Abbott Elementary” provided much levity. Sheryl Lee Ralph was there to present her “work child,” Brunson, with the Crystal Award For Advocacy and began her speech singing “Endangered Species” by Dianne Reeves, as she had done during her Emmys acceptance speech. Ralph’s voice permeated the room as attendees cheered.

The Emmys were a historic milestone for the sitcom — confirmation of its adoration and importance. It was also a wild night for the cast. “We went to the ABC party and a lot of people ate and drank their faces off,” Lisa Ann Walter told POPSUGAR. “I’m not gonna say who, but there may have been some dancing.” Walter also recalled Ralph taking time to speak with everyone who congratulated her that evening. “About an hour and half into the festivities, she completely lost her voice, and we had to work the next day,” Walter remembered. “We were on set at 6 a.m.”

Walter and Ralph both made clear their admiration for Brunson, who at 32 made history with her Emmys win. “She might be young, but she is ready,” Ralph said in her speech. And as Walter told POPSUGAR, “She’s given in our show a vehicle for Sheryl and I to be work wives and to share that relationship. So many people respond to it because they recognize it from their own life.”

In an especially emotional moment during her speech, Ralph praised Brunson for uplifting the underdog: “She is here not just to reach her own potential, but to help others reach theirs, like she did for me with my Emmy win for best supporting actress.” Tears filled Ralph’s eyes at this point, and she said, “I wrote this and it’s making me cry.”

In the subsequent panel, Brunson recognized the shows and films that shaped her upbringing, including “In Living Color,” “All That,” and “Sister Act 2,” which she said made her fall in love with Ralph as “this woman yelling at Lauryn Hill.” Brunson said she hopes to provide a formative cultural touchstone for future generations. “Artists feel like pieces of puzzles. I don’t believe I’m the only one,” she said. “‘Abbott’ is the stepping stone for something else.”

“Quinta came into this project with such a plan, and she had such forward thinking about what would happen down the line. I bet you when she walked into the room just to pitch the first episode, she had five years in mind,” Walter told POPSUGAR. “She knows.”

As their panel ended, Brunson and Ralph exchanged “I love yous” and hurried home so they could get to bed and be back on set early the following morning. Though the evening offered an opportunity to celebrate, the work, after all, is never done.

On the Mat with Regina Santos – Introduction 5164

Mastering Your Next Dance Audition — A Dancer’s Life

How Retailers Can Keep Up With Retail Consumer Trends