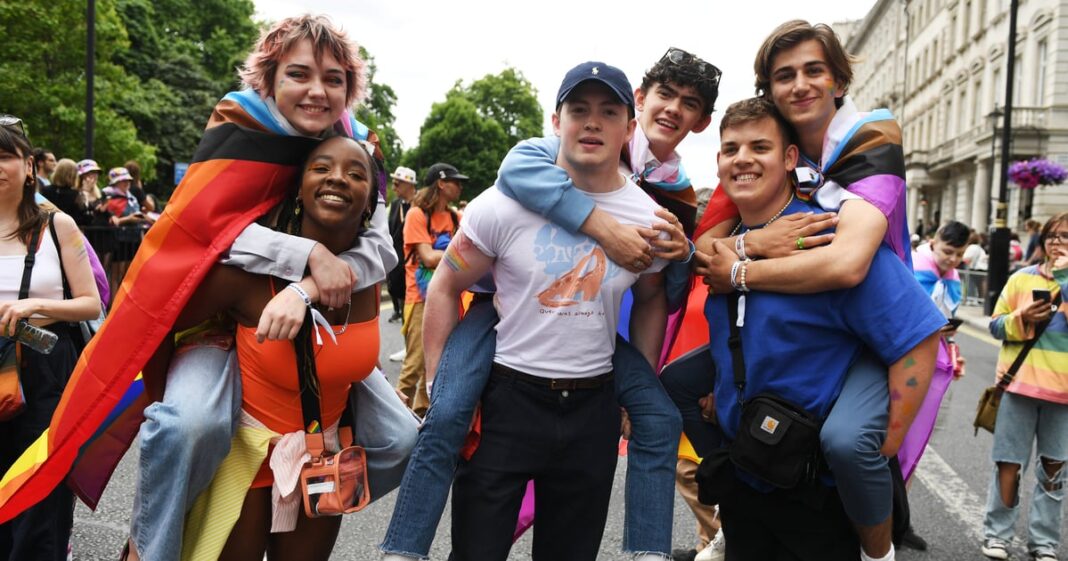 The “Heartstopper” cast were all about love — and shutting down protesters — at the Pride in London March on Saturday. Joe Locke, Sebastian Croft, Kit Connor, Tobie Donovan, Kizzy Edgell, Corinna Brown, and Jenny Walser were all on hand to celebrate the march’s 50th anniversary. In the process, Locke and Croft ended up blocking protesters using their rainbow flags and a few bars from Whitney Houston’s “I Wanna Dance With Somebody (Who Loves Me).”

The incredible moment was captured on video and shared on Twitter, where Connor made sure his castmates received their dues. “Uhhh I was videoing and screaming at them but please don’t be mistaken, it wasn’t ‘Kit Connor and the rest of the cast’, it was @joelocke03 and @SebastianCroft front and centre. Please give them the credit for doing something so powerful,” he tweeted.

Locke tweeted back, “It was all of us,” alongside a red-heart emoji. While the moment was a peaceful one, one of the attendees and a protester appeared to get into a tugging match over a sign. When the attendee let go, some of the cast, including Locke, gave the protesters the middle finger and then carried on singing and dancing.

Attending the march was a special moment for the whole cast. “Yesterday was the most magical day! ✨Such a joy to be celebrating pride with our community and to get to speak on stage at Trafalgar Square was ridiculous!!! Feeling all the love and all the PRIDE!” Donovan wrote on Instagram.

Edgell added in their own post, “thank you so much to @prideinlondon for having us do your 50 seconds for 50 years for #AllOurPride thank you so much to my castmates for being with me on one of the best days of my life, i love u so much thank you everyone in trafalgar square for being such a great audience that i forgot how to speak 😅 thank you most of all to everyone that came before us, teachers and activists and incredibly brave people, that allowed for a day like that to happen. i owe you my life, truly, and promise to never forget your historic contributions. this is the proudest i’ve ever been, and yesterday i felt like myself without a tinge of shame or fear, so thank you so much.”

Since its premiere on Netflix, “Heartstopper” has been praised for its joyful portrayal of the teen LGBTQ+ community. The show even holds a 100 percent score on Rotten Tomatoes. Given its large fan base, terrific reviews, and powerful message, it’s no surprise that the streamer has already renewed the series through season three.

Check out the gallery to see photos of the “Heartstopper” cast living it up at London’s Pride March.

Dance-Friendly Movies For the Whole Family