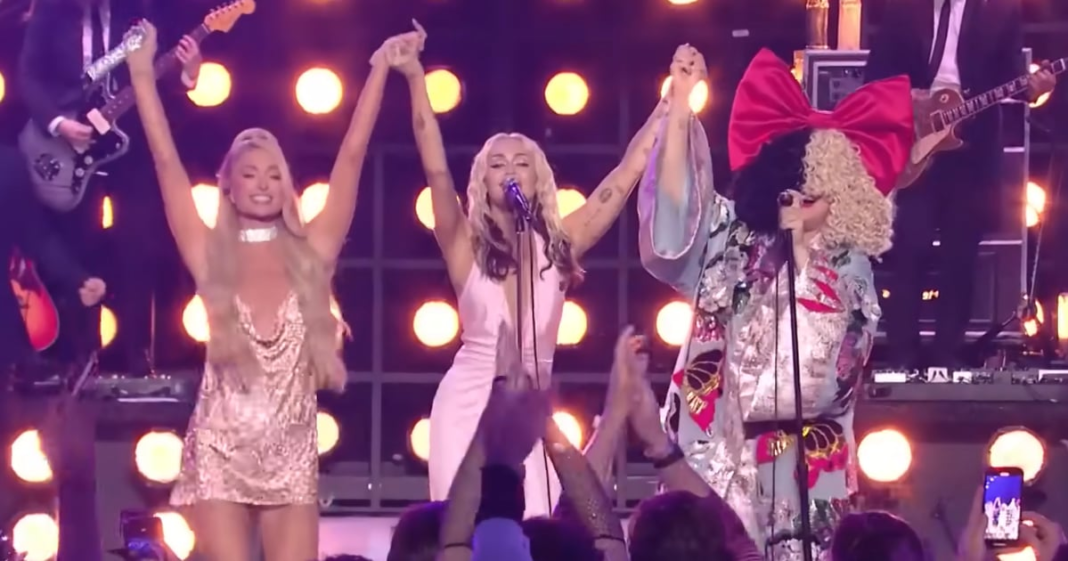 Is it too early to declare 2023 the year of Paris Hilton? “Miley’s New Year’s Eve Party” was already sending 2022 out in style thanks to Miley Cyrus’s duets with her godmother, Dolly Parton, and Fletcher, but the “Wrecking Ball” singer took things to a whole new level when Sia and Hilton joined her on stage to sing Hilton’s ’00s classic, “Stars Are Blind.” Cyrus and Sia kicked off the performance on their own before Hilton showed up just in time to sing the final chorus.

As you might expect, the crowd went wild, but no one seemed more excited than Sia. “It’s Paris Hilton!” she shouted as Hilton closed out the song. As the trio sang the final note, Sia gestured to the former reality TV star and said, “The queen! The queen!” Meanwhile, Hilton wrapped up the unforgettable performance as only she could — by saying, “That’s hot!”

Hilton made it clear on Instagram that she is “sliving” her best life. “Still on a high after last night!” she captioned a collection of photos from the show. “It felt so good to be back on stage and it was so inspiring to be surrounded by so many talented artists who I look up to and feel lucky to call my friends.🥹 2023, I already love you! 💖 #StarsAreBlind 💫 #Sliving.”

In a second post, the DJ shared how much she enjoyed singing with Cyrus and Sia and wished her fans a Happy New Year. “I told you I had another surprise! 😉 I had so much fun singing #StarsAreBlind on @MileyCyrus’ New Years Eve Special with Miley & @SiaMusic! 🥳 The perfect way to ring in 2023 and celebrate my new version of this iconic song. 🎶🎤👸🏼💖🪩 I can’t wait to show you all the other exciting things I’m working on. This is only the beginning! Happy new year! 🎊,” she captioned a video of the performance.

Earlier in the week, Hilton released an updated version of “Stars Are Blind” and revealed she’s planning on releasing more music in 2023. “Surprise!🥳 I just dropped an updated version of ‘Stars Are Blind (Paris’ Version).’ 🎶 Check it out exclusively on @AmazonMusic 💖🥰 This song has always meant so much to me, it felt right to close out 2022 with a refreshed version,” she wrote on Instagram. “💫 And seeing my face lighting up Times Square is so special.👸🏼 Thank you to everyone who has always supported my music career. I literally have the best fans on the planet and have loved seeing all of your posts about the new song. 🥹 P.S. More new music to come in the new year.”

Could that new music include an official collab with Cyrus and Sia? Only time will tell, but no matter what, Hilton, Cyrus, and Sia are already a truly iconic trio.

How to Heal Trapped Trauma with Qigong

The Full Moon In Taurus + Full Moon Eclipse On November 8

Ovarian Hormone Imbalance? This May Be Why