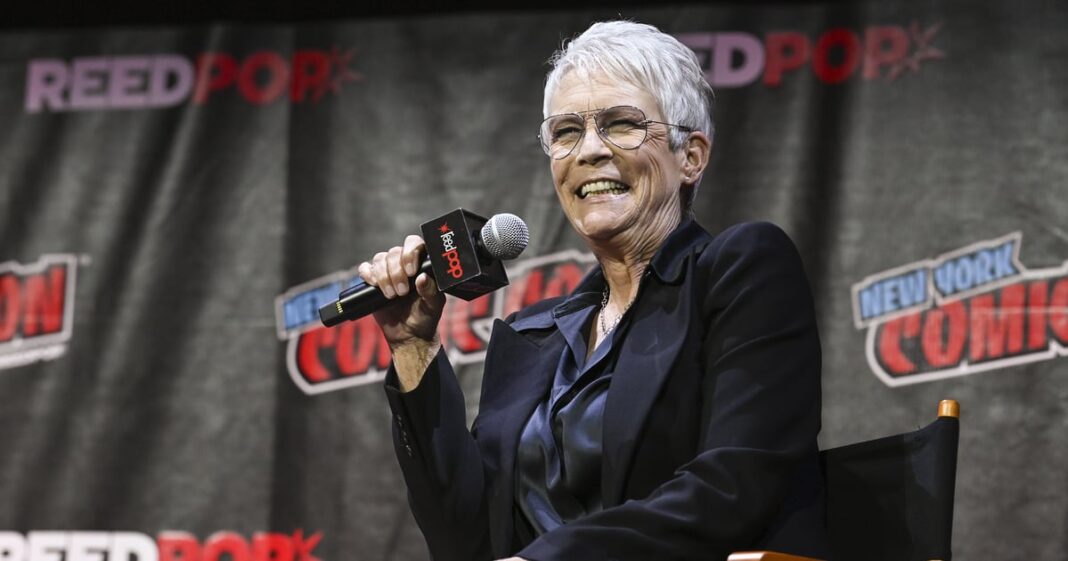 Jamie Lee Curtis got very emotional while discussing “Halloween Ends,” and her legacy as Laurie Strode at New York Comic-Con on Oct. 8. “At this point, Jamie and Laurie have become woven together. There is no separation,” she said during her conversation with Drew Barrymore on Saturday night. Curtis first played Laurie in 1978’s “Halloween,” her first film role. She was just 19 years old while filming director John Carpenter’s horror masterpiece. “I would not have a career,” she explained of the role’s impact on her life. “I would not have a family. Everything comes from you loving her.” Curtis referenced her age and said that “one of these days” she will pass away and “It’s gonna say three words: ‘Halloween’ Actress Dies.”

Curtis has played Laurie in seven “Halloween” films, including “Halloween Ends,” which comes out Oct. 14 in theaters and on Peacock. She also talked about how she ended up appearing in 1998’s “Halloween H20: 20 Years Later” and very briefly in 2002’s “Halloween: Resurrection.” According to Curtis, she went to director Carpenter and producer Debra Hill with the idea of doing a sequel to mark the twentieth anniversary. Neither ended up returning for “H20,” but Curtis signed on. “It was conceived as what happens when you run from fear,” she explained. Laurie is in hiding, with a new name. “The whole conceit of the movie was if you’re running from fear, you’re dead inside.” At the movie’s end, as Curtis imagined, Laurie would finally kill Michael Meyers once and for all.

But when Curtis got the script for “H20,” it had a “vague” ending. “In that moment, there was some contract . . . and you couldn’t kill him,” she said of the franchise’s iconic villain. She was mad because she didn’t want to tell fans it was the end if it wasn’t really the end. Writer Kevin Williamson came up with a solution: Laurie would think she killed Michael Meyers, only for the mask to lift and reveal an innocent paramedic.

Curtis ultimately agreed to this ending, with a caveat. “I said, but you have to pay me a lot of money in the next movie, and you have to kill me in the first ten minutes because I now killed an innocent man, and I can’t live with that,” she said. Michael Meyers kills Laurie at the beginning of “Halloween: Resurrection,” though both “H20” and “Resurrection” were retconned by 2018’s “Halloween.”

Curtis also revealed that the person who convinced her to return to the franchise was her godson: Jake Gyllenhaal. He had worked with director David Gordon Green before. “David Gordon Green sent me a script where he said I think Laurie’s spent 40 years living behind barbed wire,” she explained. She feels that after the events of the first “Halloween,” Laurie went to school the next day, and never dealt with the trauma around Michael Meyers’ murder spree.

“It was an incredibly beautiful movie about her trauma,” she said, before addressing the online meme of her saying the “movie is about trauma” in quite a few interviews. “I’ve seen the f*cking meme,” she said at Comic-Con. “But the movie also made a f*cking fortune, so f*ck you.”

As for “Halloween Ends,” Curtis said the movie, which picks up four years after 2021’s “Halloween Kills,” is also about hope. “We have to have hope,” she said. “If we don’t have hope, we’re so f*cked.”

“You know endings are a bitch,” she said of wrapping up her time in the franchise. “But so is Laurie Strode. So I’m ready to end it, but I’m gonna miss you so much.”