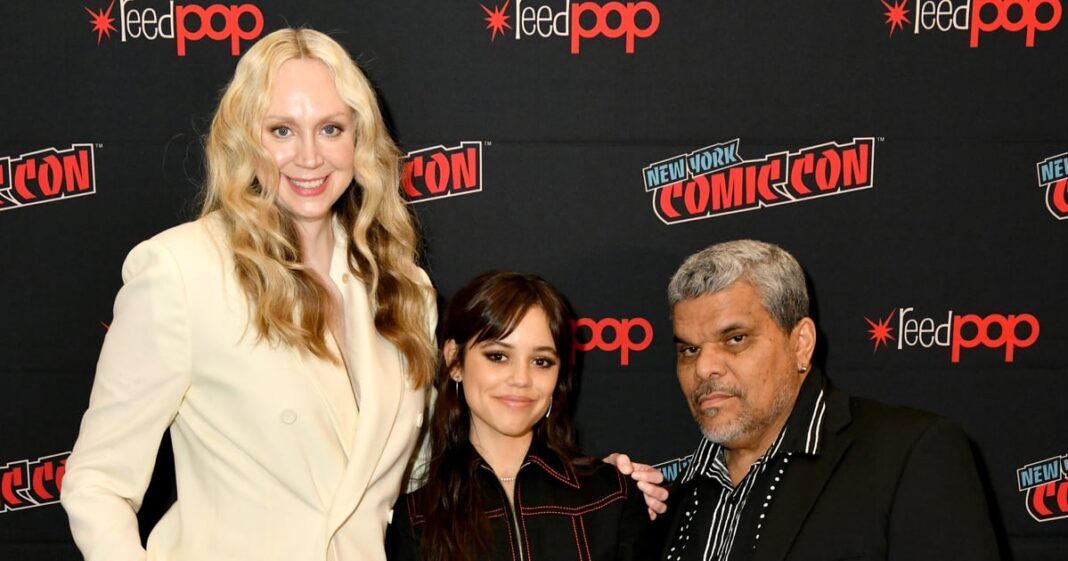 Gwendoline Christie is always a formidable, striking presence on screen. Most recently, she starred alongside Jenna Ortega in Netflix’s “Wednesday” as Larissa Weems, the principal of Nevermore Academy, where Ortega’s titular heroine goes to school. This summer, she appeared as Lucifer in the streamer’s “The Sandman” series, which was renewed this fall. Fans, of course, first fell in love with her as the greatest knight in Westeros, Ser Brienne of Tarth, in “Game of Thrones,” and she brought her sword-fighting skills to outer space for the Star Wars sequel trilogy, where she played Captain Phasma. And while her acting chops are top-notch, there’s another reason why Christie makes such an impact in everything she appears in: her incredibly tall height.

How tall is Christie? The 44-year-old actor clocks in at 6’3″ (191 centimeters in the metric system). Her “Wednesday” costars really help emphasize her height, too: Ortega and Christina Ricci are both 5’1,” Luis Guzmán is 5′ 5,″ and Catherine Zeta-Jones is 5′ 7.” She’s also quite a bit taller than her “Sandman” costar Tom Sturridge, who’s 5’10,” and her frequent Star Wars scene partners John Boyega and Oscar Issac, who are both 5′ 9.” Her “Game of Thrones” costar Nikolaj Coster-Waldau is much closer to her height at 6’2″ — but that’s before Christie puts on heels, which she often wears. Christie’s partner Giles Deacon is also a few inches shorter than her when she wears heels.

Back in November, Christie opened up about her “Wednesday” transformation, which saw her wearing more traditionally feminine outfits and makeup than she usually wears on-screen. In an interview with Entertainment Weekly, she described Weems’s style as “this Hitchcock-style heroine.” Praising costume designer Colleen Atwood, she added, “It is the first time I’ve ever felt beautiful on screen.”

“The way she made me feel was [that] my body felt celebrated and beautiful. Never once did I feel like there was something to hide or something to be ashamed of,” Christie added. “She made me feel incredible.” Christie is also a fashionista in her own right; not only has she worn headline-making outfits on the red carpet (including some designed by Deacon), but she’s also modeled for brands like Vivienne Westwood, Thom Browne, Miu Miu, and Tomo Koizumi.

Back in 2015, she told Harper’s Bazaar that she was often told as an up-and-coming actor that “if you were taller than average, you couldn’t act on-screen. But you’ve got to hang in there because things change.” She added that she was grateful to be able to shift perceptions through her work. “It means there’s a shift in our culture and our way of thinking about how women are perceived,” she said at the time. “People want to see a more diverse representation of women than the homogenized ones we’ve had so far.”

“Daring to me is to step outside the confines of conventional thought,” she told the outlet with a laugh, adding, “In heels.”