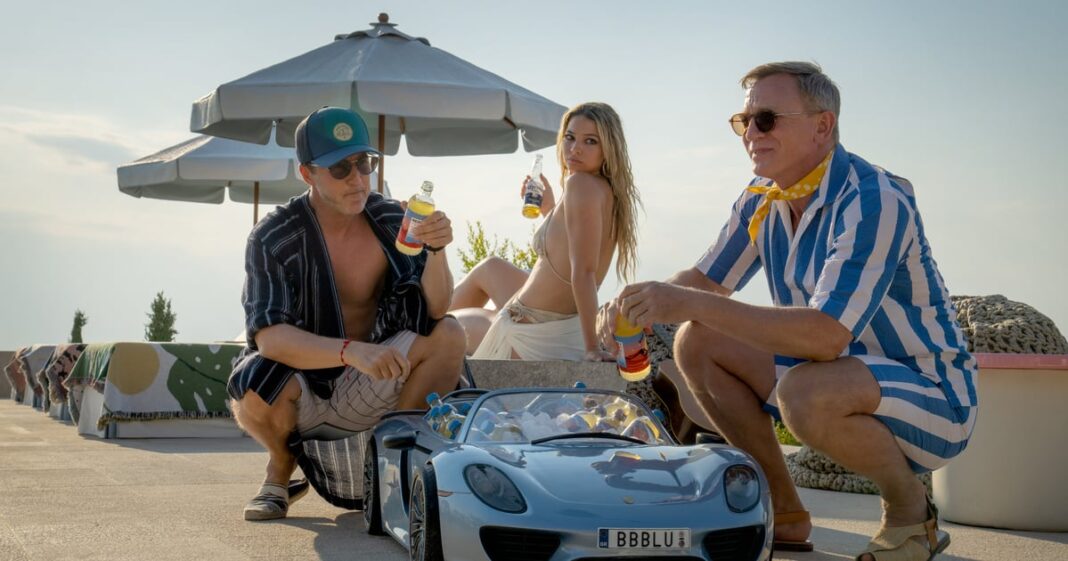 Things are tense on the island with everyone keeping each other’s secrets. Miles reveals that his company is ready to go forward with a new hydrogen fuel, which outrages Lionel and Claire because hydrogen is extremely flammable. Andi, too, is strongly against the idea. Miles reveals that his whole island runs on the stuff already. Later in the night, after some arguing, Duke dies, seemingly poisoned.

And that’s when Blanc begins to reveal the truth of what’s been going on. He started on this case when Andi’s identical twin sister Helen (also Monáe) first showed up at his door. Andi is dead, and the police have ruled it a suicide, but Helen doesn’t believe it. She explains that Andi was the real genius behind Miles’s company and that when Miles came up with the idea for the hydrogen fuel, she refused to comply because of how dangerous it was. The pair were locked in a legal battle over the company, but Miles claimed he had the original idea for the business one night at the bar when they were with friends and that he wrote it down on a napkin. Andi was, in fact, the one who wrote the idea down, but all their friends — owing their own success to Miles — lied along with him, and Andi couldn’t find the real napkin. Recently, Andi finally located the real napkin and sent them a photo warning them. She died that day.

Blanc comes up with the idea to have Helen pose as Andi on the island; the real killer wouldn’t be able to reveal that they knew she should be dead. In flashbacks, viewers watch the pair investigating together — Helen is a natural — and slowly they uncover everyone’s motives and whether they had the opportunity. Eventually, they learn that after Andi sent the email with the napkin, all the friends arrived at her house to confront her. Duke was the first one there, making it seem like he was the killer.

But Blanc remembers that, earlier in the day, Duke mentioned that Miles once almost pancaked him with his car — and he meant outside Andi’s house. During the party earlier that night, Duke got the Google alert that Andi was dead, and he showed it to Miles, blackmailing him. Duke knew Miles did it. Miles used Duke’s pineapple allergy against him and killed him with a few hidden drops of juice.

Meanwhile, Helen finally located Andi’s real napkin where Miles — who, as Blanc mocks, is the complete opposite of a genius — hid it in his office. She reveals the evidence, but Miles burns it. Blanc tells Helen that this is the end of the road for him, but maybe not for her. He gives her the piece of hydrogen fuel Miles had shown them earlier and leaves.

Helen starts to trash the place and no one knows how to react — that is, until she starts a fire and throws the piece of hydrogen. The tiny piece, plus the hydrogen running the island, causes a huge fire. Miles, earlier, had shown them that he rented the real Mona Lisa to be in his house, since the Louvre was closed. As the fire rages, Andi and Miles race toward it; Andi hits the button to release it from its protective cage, and the Mona Lisa bursts into flames.

Outside, everyone collects themselves and Miles’s friends finally promise to testify to the truth about Miles and his plans, plus his murder of Andi. Helen sits next to Blanc, revenge complete.

Why Doesn’t Everyone Die in the Fire in “Glass Onion?”

During the movie, the characters make several references to the Hindenburg disaster — an airship that caught fire in 1937, killing 35 people on board. The causes of the accident are still unknown, but it’s believed the hydrogen in the ship caught fire. Thanks to studies that came out of the Hindenburg disaster, scientists learned that hydrogen fires are actually more survivable than fires of gasoline or wood, because the heat is released upward very quickly. The fire burns itself out much faster than other types, so considering they were on land rather than trapped in a flying blimp like in the case of the Hindenburg disaster, it isn’t far-fetched they all made it out alive.

What Equipment is Needed for a Home Gym?