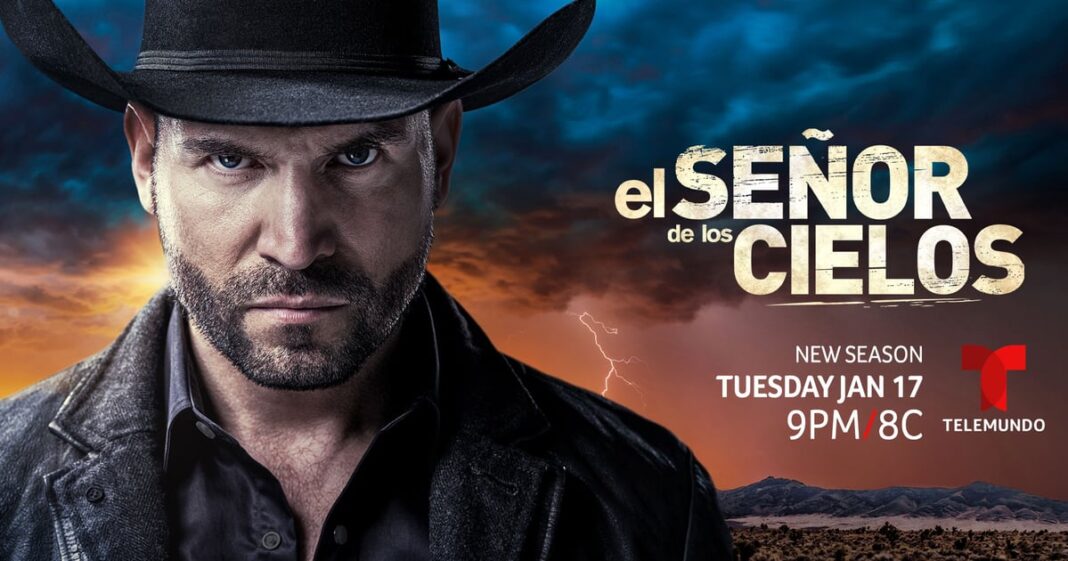 When we think of telenovelas, we’re quick to get nostalgic about the ones we grew up watching with our moms and abuelas. We tend to associate them with being an older-generation thing, with their overdramatic and also very predictable love narratives. But that doesn’t mean there aren’t young Latinx folks out there who don’t tune in. It makes sense, considering there are audiences who do consume content and entertainment both in English and Spanish. In fact, NBCUniversal Telemundo Enterprises established the term “200%ers” to describe them, referring to a demographic of Latinxs who identify 100 percent as American and 100 percent as Latinx and “share the values of both cultures, are bilingual, and flawlessly jump between cultures.” This would explain why Emmy Award-winning telenovela “El Señor de los Cielos,” with its eighth season returning to Telemundo on Tuesday, Jan. 17, has become a cross-generational hit over the years, appealing to a wider Latinx audience than ever thought possible.

The premise behind this season is the return of the show’s protagonist Aurelio Casillas, played by telenovela star Rafael Amaya. In season seven, all the characters believed that Casillas, the notorious drug lord, was dead. But he’s back, along with the show’s key cast members, including Carmen Aub as Rutila Casillas, Iván Arana as Ismael Casillas, Isabella Castillo as Diana Ahumada, and Alejandro López as Super Javi, with new characters like Casillas’s new love interest Mecha, played by Africa Zavala; Rúben Cortada as Fernando Aguirre; and Yuri Vargas as Tracy Lobo.

“I feel great. Everything has been splendid. I’m really surprised by some of the characters and the story,” Amaya told POPSUGAR at the premiere of “El Señor de los Cielos” in Mexico City on Jan. 13. “It’s been two years and a half already developing this project, and I’m so excited right now to see everybody. I feel great. If I could describe my emotions in one word, it’s love. I feel the love of everybody.”

“El Señor de los Cielos” has become a major blockbuster. It’s Telemundo’s longest-running super series, produced in Mexico by Telemundo Global Studios and written by Luis Zelkowicz. The common running themes in telenovelas have traditionally been around complicated love triangles, family dramas, and loss. But there’s been a shift since productions like “La Reina del Sur,” “Sin Senos No Hay Paraíso,” and “El Señor de los Cielos” were released. These more action-based novellas are less about love — though they do include romance and sex scenes — and more about the Latin American world of drug trafficking. And while shows about narcos may not seem like positive Latinx representation, one thing they are is real. This is likely the reason younger audiences find themselves gravitating toward these types of telenovelas. It brings into question if the success of telenovelas like “El Señor de los Cielos,” which was originally released in 2013, and “La Reina del Sur,” which was released in 2011, inspired shows like Netflix’s “Narcos,” written by Chris Brancato, which dropped its first season in 2015.

“I think telenovelas were afraid of breaking the standards and the stereotypes, and it was always the typical story. And when ‘El Señor de los Cielos’ came out, it was like a big revolution and it changed the market completely.”

“I think telenovelas were afraid of breaking the standards and the stereotypes, and it was always the typical story. And when ‘El Señor de los Cielos’ came out, it was like a big revolution and it changed the market completely,” Castillo tells POPSUGAR. “It inspired other markets and other channels to start doing something similar. To start doing action. To start having more sex scenes. It’s very daring, and this new season comes with so many things . . . I think narcos in Latin America is something that people were afraid to talk about until ‘El Senor de los Cielos’ came out.”

Aub believes the way to approach these shows is to keep in mind that while drug trafficking in Latin America is, unfortunately, a reality, “El Señor de los Cielos” is still just a telenovela; it isn’t meant to romanticize the life of a drug lord.

“I think as long as people remember, yes, you [might] see Aurelio Casillas all handsome with all these pretty women, but it’s not that reality. The reality is that we are always running away. We are facing the death of our loved ones,” she tells POPSUGAR. “So as long as people remember that side of the story: [that] it’s not a good story. And this season, of course, we’re never going to lose the essence of what ‘El Señor de los Cielos’ is: the action, the sexuality, and all the characters. But we’re going to see a lot more of the real side of what being a narcos is. I think that’s going to add a lot and remind people what this is about.”

The new season is packed with more action, surprises, and drama than ever. We’re curious to see what the fate of Aurelio and the Casillas family will turn out to be. Viewers young and old will likely be tuning in this season. Will you be watching this week?

Celibacy: What It Is and How It Can Be Beneficial