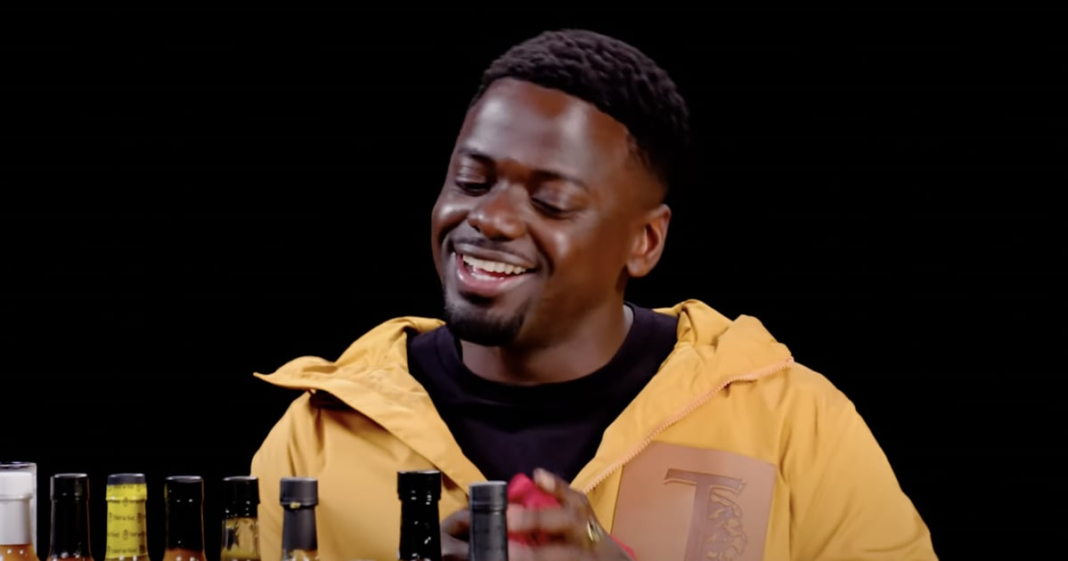 Daniel Kaluuya’s acting résumé is proof that he’s up for any task. From his breakout role in Jordan Peele’s horror phenom “Get Out” to his Oscar-winning portrayal of Fred Hampton in “Judas and the Black Messiah,” the actor can hang with the best of them. But in conquering the wings of death challenge on First We Feast’s latest “Hot Ones” episode, he may have outdone himself with one of his best performances to date.

“. . . I can’t really spoil it, but he found a way to bring fear into the light essentially.”

The “Nope” star joined host Sean Evans for a smorgasbord of wings for his “Hot Ones” interview, released on July 13, as they discussed his new horror flick. Unlike the typical dark and scary films most horror fans are accustomed to, Kaluuya explained how Peele manipulated daylight in “Nope” to still spook viewers for his newest haunting tale. “You can see things when the sun’s up. That’s what’s really been interesting about this process,” Kaluuya told Evans. “When it’s dark you can’t look up in the sky and see what — well, I can’t really spoil it, but he found a way to bring fear into the light essentially. Which I think is pretty special.”

Kaluuya held his own through the remainder of the interview — casually touching on his love for grime and theater, rapper Beanie Sigel’s influence on his acting, and Chicago deep-dish pizza — all while indulging in a plate of the hottest wings known to man. “Easy money,” the actor joked at one point, but he met his match around the 16-minute mark when the wings almost got the best of his tastebuds. “This chicken is going nuts in my mouth,” he exclaimed while chugging a glass of ice water.

Somehow, Kaluuya made it through all 10 wing stages and managed to share a little-known tidbit about how he learned to cry on cue for the sunken place scene in “Get Out.” “It’s like [Russian theatre expert Konstantin] Stanislavski. Sometimes you do an emotional memory, for me it’s color,” he revealed. “I remember the color I was wearing and the color would trigger me, then I’d go straight into that space . . . but when you have to do half takes . . . that’s when hot sauce could come in.”

Kaluuya stars in “Nope,” in theaters on July 22, alongside Keke Palmer and Steven Yeun. Watch him survive Evans’s spicy hot wing challenge on “Hot Ones” above.

Do we still use Penicillin? Doctor Explains #doctor #health #wellness