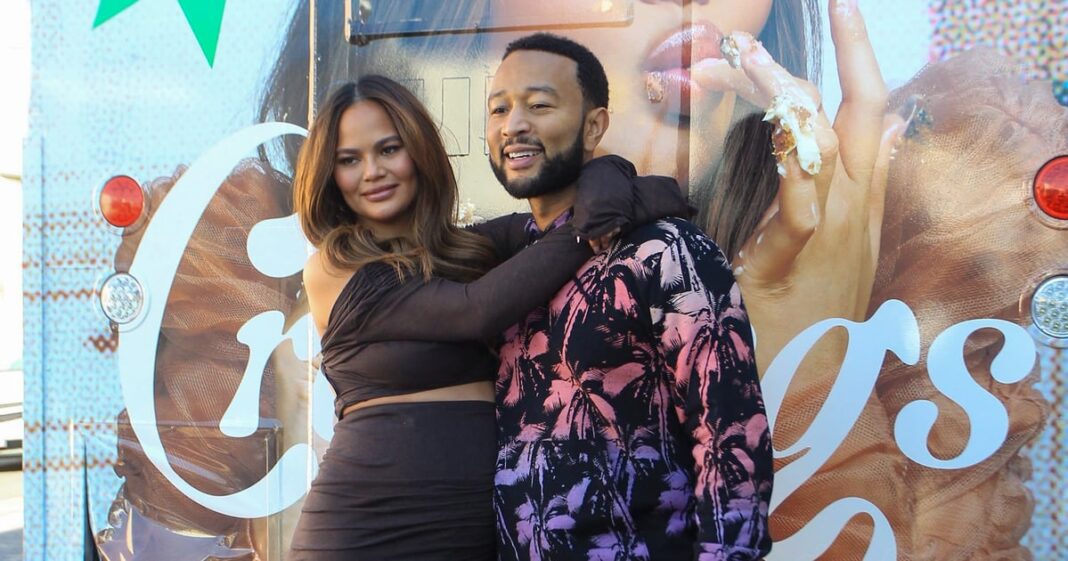 Chrissy Teigen has gone on record saying Thanksgiving is her favorite holiday, and even though she’s expecting a baby, she didn’t let that stop her from prepping a full feast for her family again this year. Both she and husband John Legend shared photos and videos from their festivities on Instagram, including the adorable moment their kids, Luna (6) and Miles (4), pulled the wishbone together.

In addition to Luna and Miles, Teigen’s mom, Pepper, was also there to celebrate Thanksgiving with the family. In her first carousel of Thanksgiving photos, the cookbook author shared a photo of her, her mom, and the kids all sitting on a couch wearing their best holiday clothes. The collection of pics also included a sweet snap of Luna and Legend hugging and a photo of a pregnant Teigen seemingly taking a break after chronicling her holiday prep on her Instagram Stories. She captioned the post with a fitting string of fall emoji: “🍂🦃🍁.”

Teigen’s second post featured a look at the family’s table, which was loaded with dishes like mashed potatoes and roasted brussels sprouts, as well as a video of Legend checking to see if the turkey was ready. She also included a video of Luna and Miles pulling the wishbone — and Miles adorably noting “I broke it” when it snapped apart.

Finally, Legend made his own Instagram post featuring sweet memories from the family’s Thanksgiving, including Teigen grinning as she cooked up some mushrooms and Luna getting snuggles with both of her parents. He captioned the photos, “Fammmm 🦃.”

There’s no doubt that Thanksgiving is a big deal in the Teigen-Legend house, and this year’s festivities were extra special since the family are preparing for the arrival of their new baby. Teigen and Legend announced their happy news in August on Instagram in a post that also acknowledged the pregnancy loss they experienced in 2020.

“[T]he last few years have been a blur of emotions to say the least, but joy has filled our home and hearts again,” Teigen wrote in the caption. “1 billion shots later (in the leg lately, as u can see!) we have another on the way. Every appointment I’ve said to myself, ‘ok if it’s healthy today I’ll announce’ but then I breathe a sigh of relief to hear a heartbeat and decide I’m just too nervous still. I don’t think I’ll ever walk out of an appointment with more excitement than nerves but so far, everything is perfect and beautiful and I’m feeling hopeful and amazing.”

Yes This Is A Normal Size Bike! #shorts