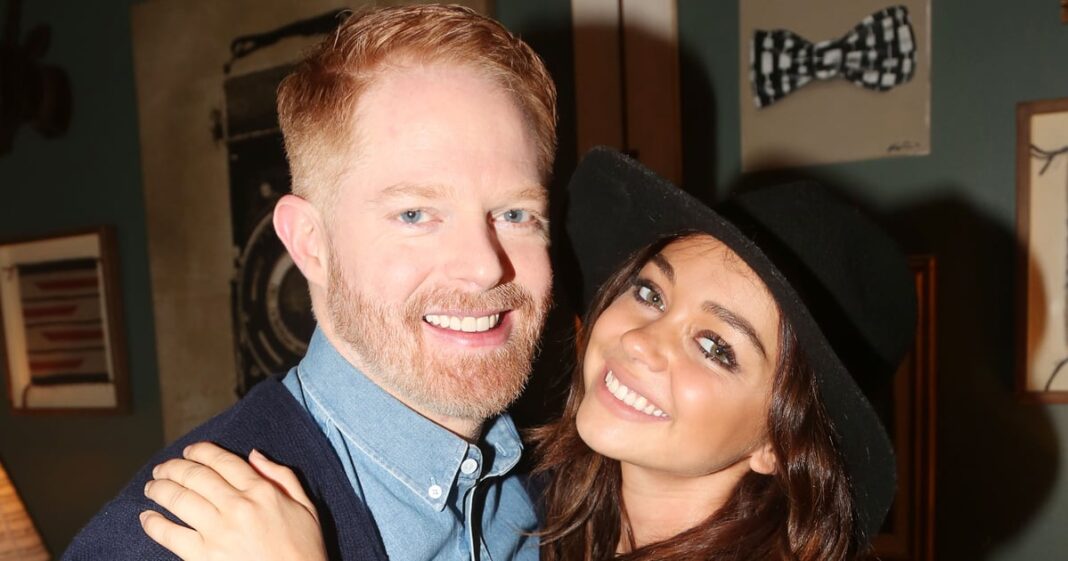 The Pritchett–Dunphy–Tucker family continue to stick together even though the cameras stopped rolling on “Modern Family” in 2020. On Saturday, Aug. 20, Sarah Hyland and Wells Adams finally said “I do” in a small ceremony at Sunstone Winery in California’s Santa Ynez Valley, and a large portion of the “Modern Family” cast showed up to support the bride. Among the cast members who were in attendance were Sofia Vergara, Jesse Tyler Ferguson, Nolan Gould, and Julie Bowen.

Ferguson even took on the role of wedding officiant from Ty Burrell after Hyland’s TV dad had to bow out due to personal reasons. On Oct. 22, two months after she said, “I do,” Hyland shared a video featuring Ferguson officiating her wedding on Instagram — and even though he had short notice, he still had the crowd laughing and “awwing” in equal measure.

In the video, Ferguson can be seen kicking off the ceremony by saying, “Welcome to the final rose ceremony!” From there, his speech became more serious. “Marriage is hard work. It tests your limits; some days asking you to bend and be malleable, other days asking you to root deep and stand strong,” he said. “Marriage is work, and sometimes marriage can be a struggle. But life is a struggle, and struggle generates life and growth and deeper love.”

He continued, “Above you are the stars, and below you is the earth. Like the earth, should your love be a firm foundation that grows stronger through the seasons. Like a star, should your love be a constant source of light. Like a flame, should your union be lit with passion and love in your hearts. Like the wind, may you sail through life safe and calm. Like water, may your relationship contain the rushing excitement of a raging river and a comment as deep as the ocean itself. By the winds that bring change, by the fire of love, by the seas of fortune, and the strength of the earth do I bless this union.”

After that serious moment, he quipped, “I felt like Gandalf right there, or like Dumbledore.” Hyland shared the actor’s full speech on her Instagram in honor of her onscreen uncle’s birthday. “To be married by @jessetyler was a dream and a privilege. Jesse, you have been such an amazing friend, mentor, and an integral part of our lives. So happy birthday to the best officiant of all time! Our wedding truly would not have been as special without you 💕🧙🏼‍♂️,” she captioned her post.

While Ferguson was the wedding’s officiant, Vergara was the unoffcial photographer. The “America’s Got Talent” judge shared a number of photos from the event on Instagram, including a photo-booth shot with Gould, Ferguson, and his husband, Justin Mikita. She captioned the adorable photo, “#sarahandwells wedding❤️❤️❤️❤️.”

Hyland’s “Modern Family” costars weren’t the only famous faces in attendance at the wedding. The actor previously revealed that Ciara Robinson would be her maid of honor, and Vanessa Hudgens and GG Magree would serve as bridesmaids. All three women joined the bride at her bachelorette party in Mexico in July. Adams’s Bachelor family also showed up in numbers, including Nick Viall, Joe Amabile, and Michael Allio.

The happy couple had a long road to the altar due to the pandemic. Hyland and Adams first met in 2017 when he slid into her DMs. They later got engaged in Fiji in 2019 and originally planned to tie the knot in August 2020. However, when the pandemic happened, they had to postpone their nuptials. Now, two years later, they finally made it down the aisle with plenty of their closest celebrity pals on hand to celebrate their special day.

Can We Rely On Event Platforms For Audience Engagement?