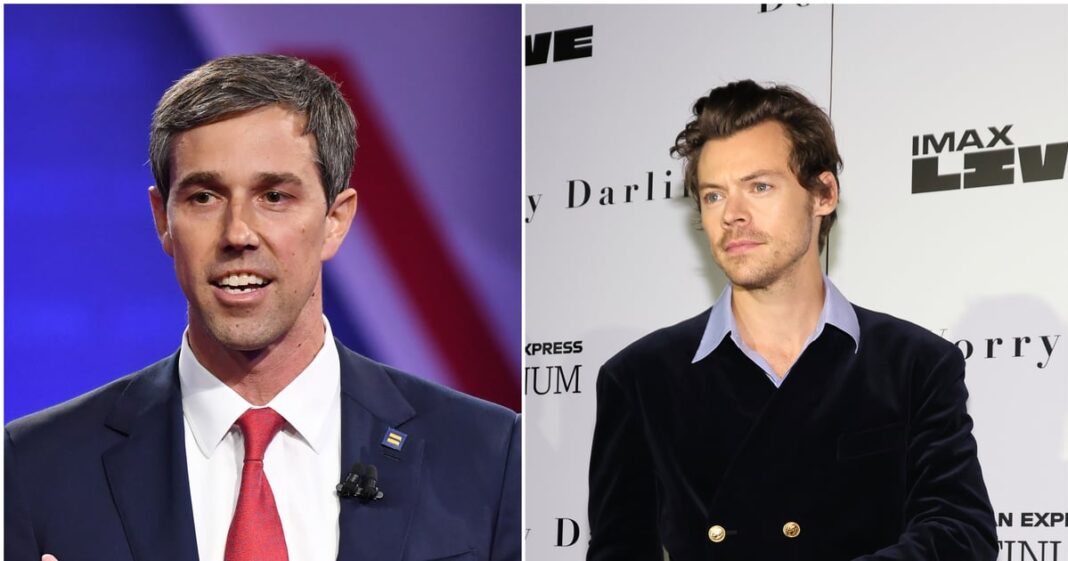 Texas Democrat gubernatorial candidate Beto O’Rourke is singing Harry Styles’s praises after the pop star endorsed the politician at an Oct. 2 concert in Austin, TX. During the concert, the “Watermelon Sugar” singer stood silently in front of the microphone holding his guitar as a camera zoomed in to focus on a sticker that read “Beto For Texas.” In videos taken by fans, Styles can be seen pointing to the sticker and smiling, seemingly giving his approval to O’Rourke, who is up against incumbent Greg Abbott in the race.

According to O’Rourke, Styles’s subtle endorsement has raised voter awareness among young people in a significant way. The Texas politician expressed his gratitude to the singer during an Oct. 13 interview with “Hysteria” podcast hosts Erin Ryan and Alyssa Mastromonaco.

“So many young people who weren’t really plugged into this campaign — or really this race — or maybe didn’t know there was an election taking place in Texas or the issues . . . they’re taking notice,” O’Rourke said of Styles’s endorsement. “They’re curious, and they’re coming out, and they’re getting registered to vote. So that was a huge boost, and I am so grateful to him.”

O’Rourke was actually at the concert when Styles endorsed him, and the pair spoke backstage afterwards. For his part, the politician revealed he thinks it’s “cool” that the British singer is “watching and paying attention” to the election in Texas.

“I think he is for the same reason that we’re talking right now, that there’s probably no state that has a greater bearing on this country’s future on the issues that matter most: voting rights, reproductive healthcare freedom, gun violence,” O’Rourke explained. “I mean, you name it, it is right here in Texas, and he’s well aware of that.”

Indeed, Styles has made it clear he’s paying attention to issues like gun violence and women’s reproductive rights in recent months. In the wake of the Uvalde, TX, shooting in May, he pledged $1 million in proceeds from his tour to Everytown For Gun Safety. More recently, in September, he spoke out about women’s reproductive rights during one of his Austin concerts. “No one can tell you what to do with your own body, it’s yours,” he said, per Fox 7 in Austin.