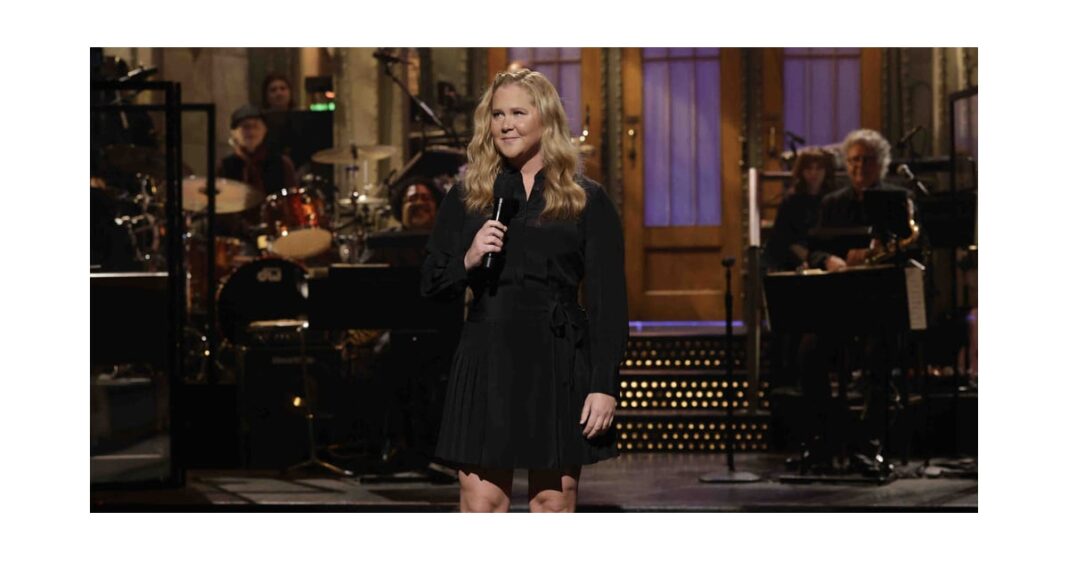 Someone is watching Amy Schumer, and she’s not happy about them blabbing all her secrets. Schumer stepped into the role of “Saturday Night Live” host for the third time in the Nov. 5 episode, which included a parody of Netflix’s latest hit Ryan Murphy series “The Watcher.” In the “SNL” sketch, “The Watcher” becomes “The Looker,” a person who is spying on Schumer and her picture-perfect suburban family.

The Netflix show — which was inspired by real events — leaned into the creepiness of someone watching a family’s every move and then sending threatening letters to their home. But in true “SNL” fashion, “The Looker” sketch quickly devolves into the absurd as Schumer’s mom character denies the looker’s allegations that she pleasures herself to “Property Brothers” and eats an entire second dinner after her family has gone to sleep. “What the frig?” Schumer exclaims when her character’s daughter (Chloe Fineman) realizes someone downloaded every season of “Property Brothers” to the family TV. “So this weirdo snuck into our house and messed with the TV? OK, now I’m weirded out — officially.”

Ultimately, Schumer urges her family to leave the house and the prying eyes of the looker while she stays behind to keep an eye on things. In the end, she gives her creepy stalker something to talk about as she enjoys an episode of “Property Brothers” with the window wide open. “If you’re watching, it’s the property I’m into, not the brothers,” she quips.

“The Watcher” parody was just one of the sketches Schumer brought her signature brand of humor to throughout the episode. She also starred in a skit about a woman who just wants to eat her soup despite her friend’s personal crisis, and she served up a stand-up monologue about what’s at stake during the upcoming “midterm abortions.”

“Sorry, I was thinking about what’s at stake if we don’t vote,” Schumer said. “People love giving pregnant women advice, don’t they? Like the whole time I was pregnant, I had this one friend, she kept telling me, ‘You gotta do prenatal yoga. It really helps with the birth.’ So, I immediately signed up . . . for a C-section.”

Brisa Hennessy Connects With What Feeds Her Soul

Kris Jenner’s Family Dress Up as Her for Her Birthday