Allison Williams on Working With the AI Doll M3GAN 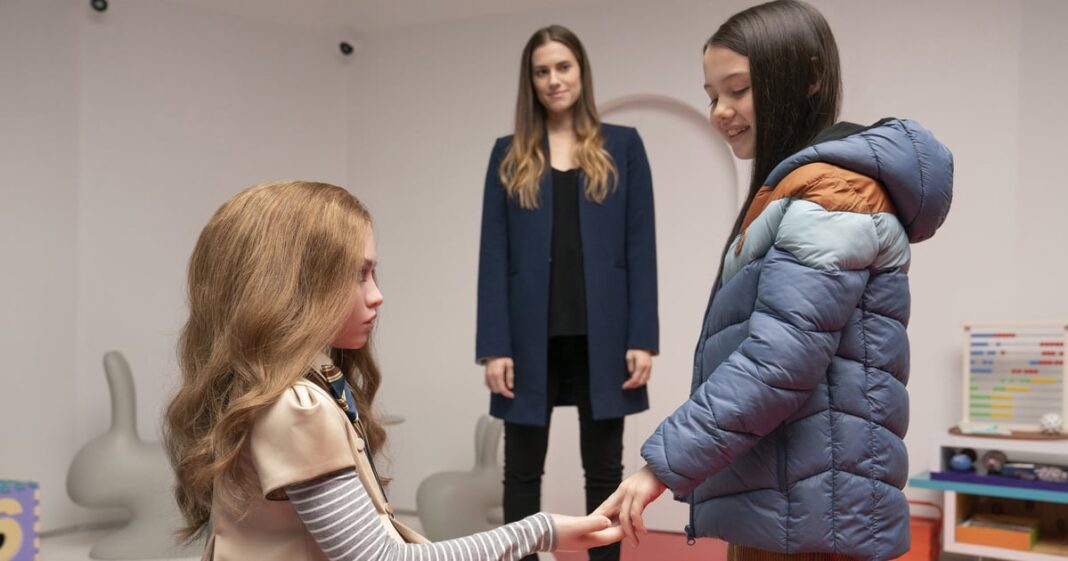 Allison Williams has worked with a lot of costars in her career, but none of them quite like M3GAN, the titular character in her new horror film “M3GAN.” Williams tells POPSUGAR that the AI doll is “complicated and challenging, but really creepy and uncanny and effective also.” She explains, “She’s a temperamental one, this M3GAN, but she’s my most high maintenance costar I’ve ever worked with by far.”

Williams won’t spill exactly how the filmmakers made M3GAN come to life on set — “I am so not ruining the magic for this,” she says — but there are also many things she loves about the character, who instantly went viral when the film’s first trailer dropped. “I just like her attitude a lot. She’s very beautiful, yes, but I think she’s also fierce and serious and tongue-in-cheek,” Williams says. “I think that tonally is the thing that makes her the most interesting and is why people have latched onto her as a little phenom.”

M3GAN the doll is played by Amie Donald with Jenna Davis as the voice. “She’s your best friend who will kill anyone if they mess with you, which a lot of best friends everywhere have threatened, but I’m not sure how many of them have actually followed through on it,” Williams says.

The film itself tells the story of Gemma (Williams) and her niece Cady (Violet McGraw), whose parents have recently died in a car crash. When Gemma takes Cady in, she’s totally out of her league dealing with Cady’s grief and needs. But it just so happens that at work, Gemma has been designing a new toy, M3GAN, an AI doll that can be a best friend, parent, and protector all in one. M3GAN can answer any question, make incredible works of art, and knows just what to say when someone is dealing with grief. Gemma jumps at the chance to gift the doll to Cady.

Williams’s connection to the film reaches back to meeting the film’s producers at legendary horror house Blumhouse after starring in “Get Out,” released in 2017. When the script for “M3GAN” came around years later, “I heard from Jason Blum that there was something that he wanted me to read and do with them, which already I was inclined to just say yes without even looking because I had such an amazing experience on ‘Get Out,'” she explains.

Then Williams read the screenplay by Akela Cooper, and she “couldn’t put it down.” She also talked to director Gerard Johnstone, and “he had this really specific vision for the movie and such a unique tone in his first original movie,” Williams says. “And I think I just thought the whole thing and the idea of working with James Wan and his horror masterpieces and his whole brand in this thriller horror world, I just thought . . . how could I ever turn this down?”

But the positives didn’t end there. “The pièce de résistance I think was the idea of playing Gemma, this really smart, career-focused, just brilliant roboticist,” she says. “And I just love the idea of playing someone like that. So it made the decision really easy.” 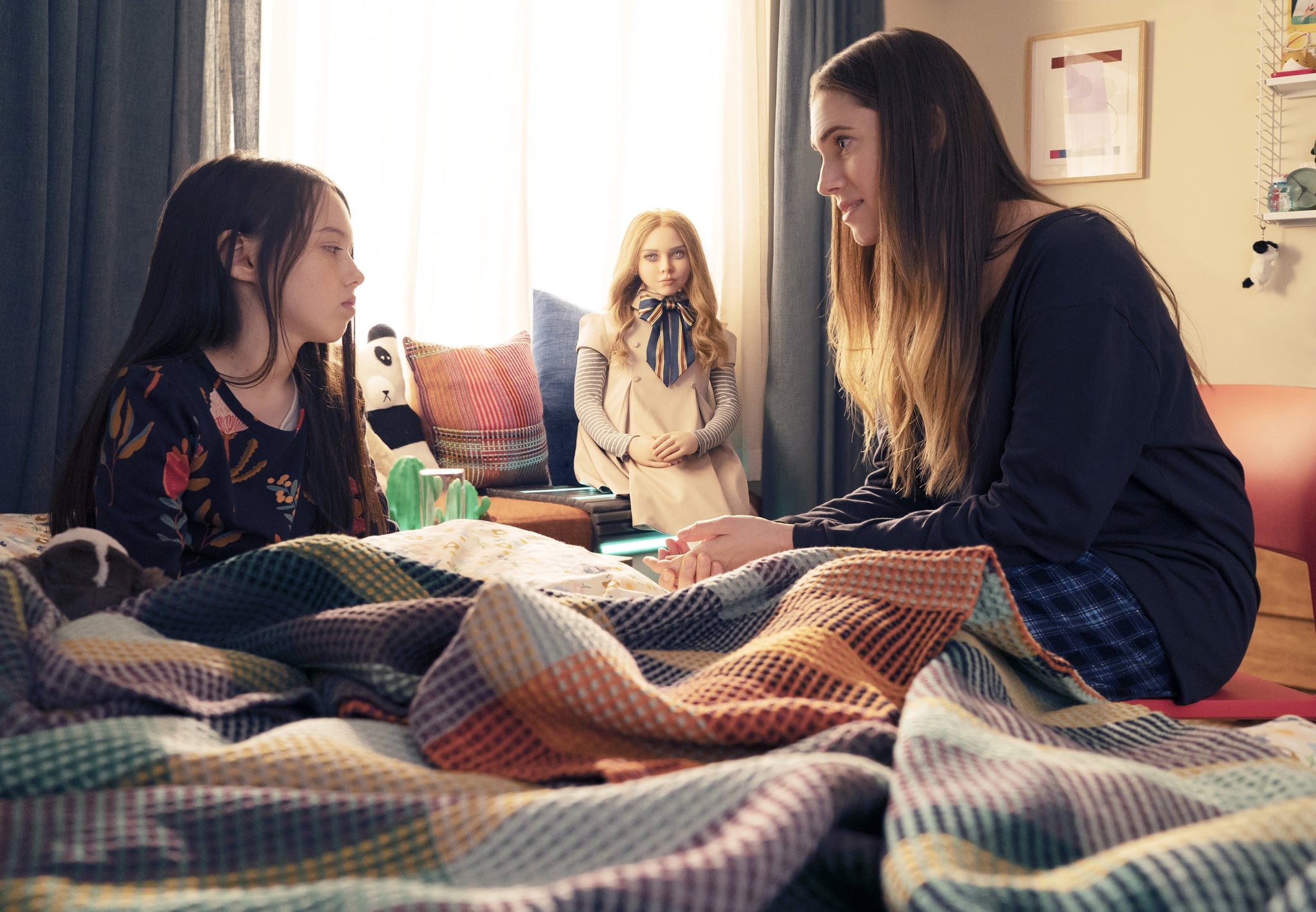 A movie about AI couldn’t be more timely, with conversations about AI-generated art and text and audio raging on the Internet every day. “I’m always attracted to movies that engage with conversations that are happening maybe a little bit peripherally and then bring it to the center, wrapped up in a package of something that’s going to be entertaining to watch,” Williams says.

In recent years, she says, it’s become even harder for parents to decide how much tech is too much tech for kids — and how much tech they need, so that they’re not at a disadvantage compared to everyone else. “That’s the dream, to be able to just drop into one of those conversations and then give it a face like M3GAN,” Williams says.

But for Gemma in the film, the stakes are higher than “too much screen time” — it’s life and death. “It goes from M3GAN just being wry and funny to holding a weapon and then things get really real, really quickly,” Williams says. “Plus, Gemma’s responsible for her, so that’s just an added right element of pressure, and she’s also responsible for her niece. So there’s a lot going on there.”

Then there’s the grief that Gemma finds herself saddled with, both her own and Cady’s. “From the minute that Cady loses her parents, what you want Gemma to do is something she’s not capable of yet, which is just to sit with Cady in whatever she’s experiencing and hold that space for her,” Williams says. “Gemma just doesn’t have that skill set, and she has no idea how to process her own grief.” That makes M3GAN and her artificial emotional intelligence the most appealing solution.

“M3GAN” the film feels built to be an eternal spin-off, with a whole franchise of M3GAN dolls causing mayhem worldwide. But Williams is tight-lipped about a sequel, remarking simply, “What an interesting concept.” Still, she says it’s exciting to be part of the birth of a new horror icon.

“When you make something like this, you hope that this doll will end up living in people’s consciousnesses. Not just in a scary way, but just as a symbol of something, and she becomes a shorthand for something,” Williams explains. “When the trailer came out and people responded to it the way they did, we were just so excited, because it seemed like people just understood who she was so quickly. They got her tone, they got her brand of humor, her intensity. . . .That’s more than we could have hoped for.”

For Williams, “M3GAN” is also another pivotal step in a long career. Next month, “Get Out” will turn six; the movie marked Williams’s first entry into the horror genre. “I feel so lucky to have been part of that experience,” Williams reflects, adding that she still sees concepts from the movie, like the Sunken Place, mentioned all the time. She says that if “Get Out” is the thing someone knows her from, she has “a very specific kind of interaction with them.”

The last season of “Girls” also aired six years ago this spring, “which is so hard to wrap my head around,” Williams says. “We are cosmically linked forever, for life,” she says of the cast. “We are also really bad at being in touch with each other, to a person, but I think we’ll be close forever.” She adds that she did just reach out to congratulate Ebon Moss-Bachrach, who had two great turns in 2022 in “The Bear” and “Andor.”

And if anyone at HBO is thinking about doing a revival, Williams is in. She would be so happy to return as Marnie, in fact, that she suggests a reunion unprompted. “I have said many times, and I will say it here again, I am very, very open to revisiting our girls in a new decade to see what life is like for them now,” she says.

But for now, she’s happy carving out a space in horror. She admits that when she watches horror films on her own, she has to pace herself because she gets very scared. “I have to watch them on a plane so that there’s ambient stuff going on,” she says. “Otherwise, if I watch it in the dark at home alone, I am not sleeping for days. I’m not exaggerating.” She hopes that if she watches enough, she’ll build up an “immunity.” But so far, “that is not happening.” And if you go watch “M3GAN,” the same thing might happen to you.

The Best Dog Anxiety Vests, According to Veterinarians| Well+Good