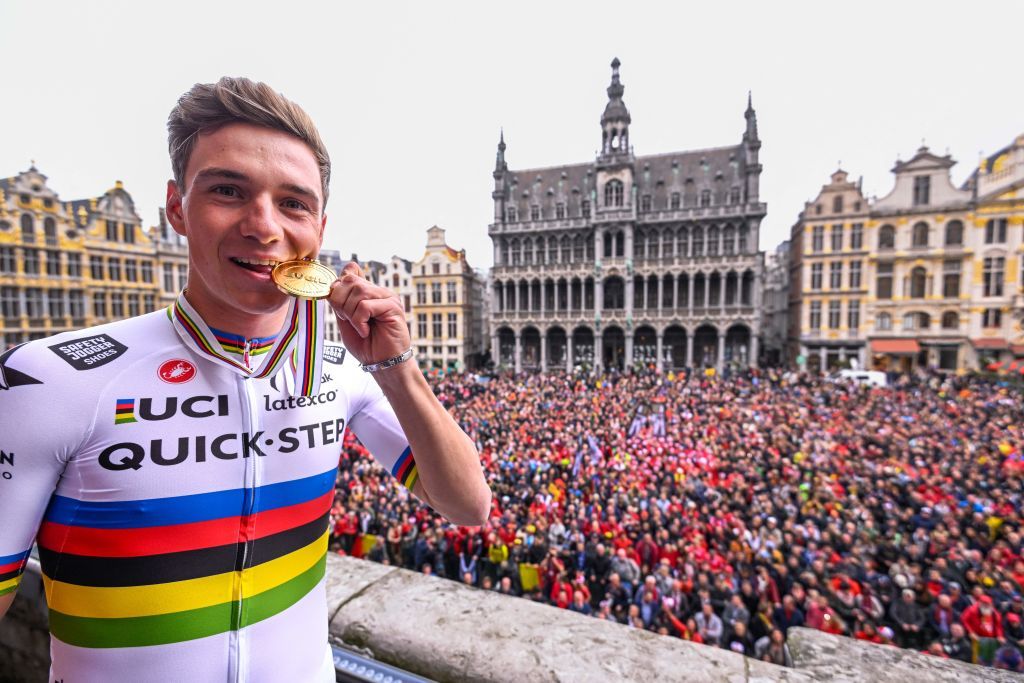 Remco Evenepoel enjoyed his Sunday with a mass celebration in Belgium to celebrate his 2022 season, with huge crowds gathering in Brussels to salute the 22-year-old.

The QuickStep-AlphaVinyl prodigy ticked off his first Monument win at Liège-Bastogne-Liège back in spring, followed with his first Grand Tour win at the Vuelta a España, and last month soloed to victory at the UCI Road World Championships to take the rainbow jersey.

Evenepoel kicked off his day with a 51km training ride in his hometown of Schepdaal before kicking off the day’s festivities at a reception with the mayor of the local municipality, Dilbeek.

He received the title of honorary citizen of Dilbeek in a ceremony on Sunday morning, cheered on by a large crowd as he signed the ‘golden book’ to accept the accolade wearing his rainbow jersey.

Whilst on stage, Evenepoel received various gifts, including a Specialized bike, a time trial helmet with rainbow stripes, and an signed Anderlecht football shirt – the team he had played for before making the switch to cycling.

After that came a short trip by car to Brussels, followed by a large cohort of fans on bike.

In Brussels, large crowds gathered in the Grote Markt to celebrate Evenepoel’s achievements as the rider greeted his fans from a balcony overlooking the central square.

During the celebrations, the crowds chanted Evenepoel’s name before he led them in a ‘viking clap’ celebration. His QuickStep-AlphaVinyl teammates Iljo Keisse, Yves Lampaert, and Pieter Serry joined him on the balcony to take part in the festivities.

“There were eight of us at the World Championships,” Evenepoel said, according to Het Laatste Nieuws. “I think we still have five guys who aren’t here. They deserve as much attention as I do. I have so many people to thank. It was a perfect year.”

Evenepoel is set to make his racing debut in the rainbow jersey at Binche-Chimay-Binche on Tuesday before calling an end to his phenomenally successful 2022 campaign.

Stitch Fix lays off 15% of its salaried workforce

Square pegs and round holes in throws