Vuelta a España: Standings at the 2021 race 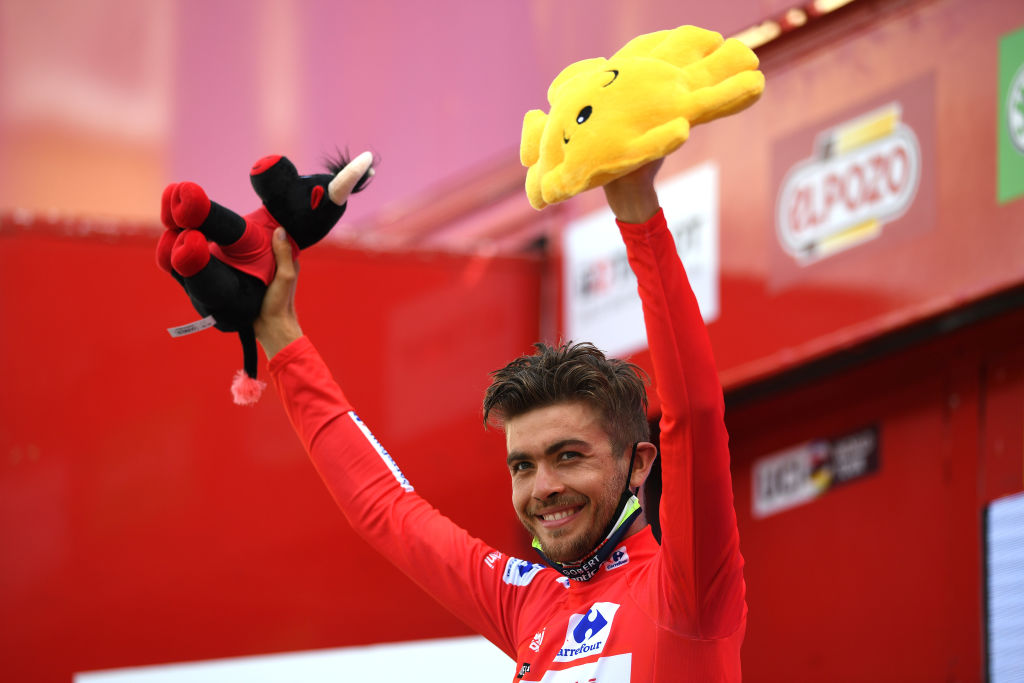 Rewarded for his day in a long breakaway, Odd Christian Eiking (Intermarché-Wanty-Gobert Materiaux) took the red jersey on a frenetic stage 10 of the Vuelta a España. Though his virtual race lead was threatened by needling attacks from Guillaume Martin (Cofidis), who began the day only 29 seconds further behind on the general classification, Eiking eventually distanced Martin on the final descent. The Frenchman finishes the stage in second place overall, at 58 seconds.

Twelve minutes behind the battle for the stage win, meanwhile, Primož Roglič (Jumbo-Visma) attacked on the slopes of the Puerto de Almáchar and scampered away from an increasingly select group that imploded with his injection of pace.

Only Miguel Ángel López (Movistar Team), Enric Mas (Movistar Team), Jack Haig (Bahrain Victorious) and Sepp Kuss (Jumbo-Visma) could maintain a pace vaguely resembling Roglič’s, and the gap stabilised at about 20 seconds until, on the descent, disaster struck Roglič as his back wheel slid out and he crashed. With that, momentum stalled in the GC race. Roglič re-joined the Movistar-led group and the Movistar-led group were joined by Felix Großschartner (Bora Hansgrohë) and Aleksandr Vlasov (Astana-Premier Tech) in the closing kilometres of the stage.

The main casualties from Roglič’s acceleration were the Ineos Grenadiers who floundered once again in this race; Richard Carapaz cracked the instant that Roglič attacked while, more importantly for their overall ambitions, Egan Bernal and Adam Yates were distanced too. They lost 37 seconds to their closest rivals. Giulio Ciccone (Trek-Segafredo) was also unable to stay with the lead group, losing 1:14.

So, despite losing the red jersey, Roglič remains the best placed of the GC contenders, in third place at 2:17. The Movistar duo of Mas and López sit in fourth and fifth respectively, 28 seconds and 1:21 behind Roglič.

After his crash in the Tour de France last month, Haig looks increasingly formidable in sixth at 3:59. He extends his lead over seventh-placed Bernal who is now at 4:46, nearly two and a half minutes behind Roglič.

Yates, Ineos’ other GC hope, slips to ninth at 5:01 leapfrogged by Kuss, who again rode strongly in support of Roglič. Eighth-placed Kuss is at 4:57.

Großschartner and Vlasov finished in the first group of overall contenders to consolidate their own tilt at the GC. Großschartner sits in tenth at 5:42 while Vlasov is a further thirty seconds back in twelfth. Ciccone slots in between at eleventh, 6:10 behind the race leader.

The Most Conceited Stars In Hollywood

Aimee Raupp on The Egg Quality Diet for Fertility and Pregnancy