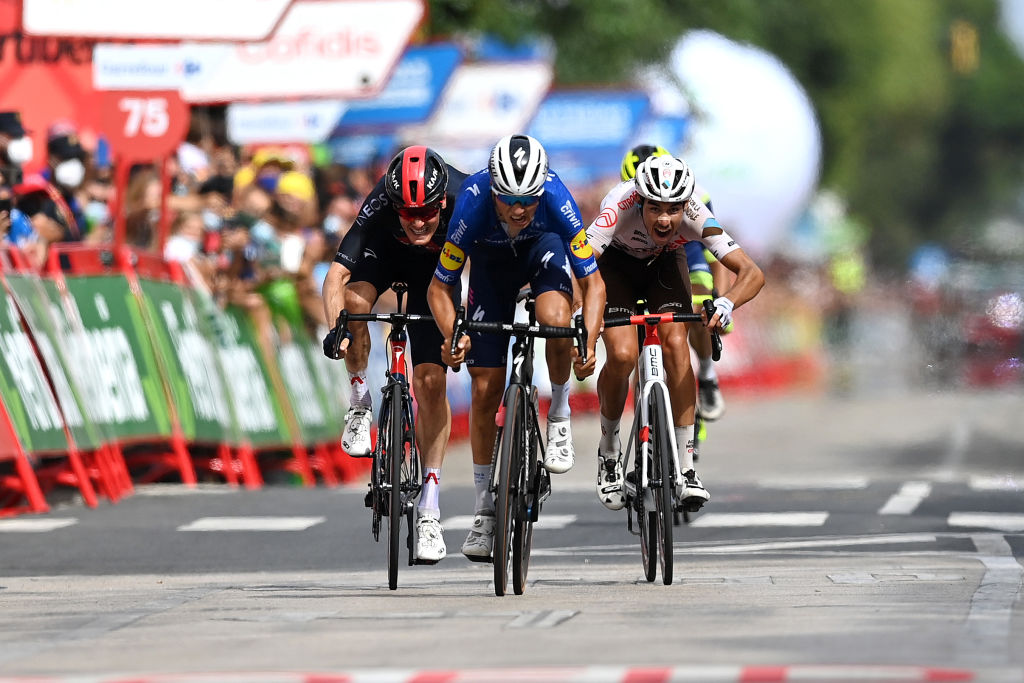 In his debut Grand Tour Belgian’s Mauri Vansevenant (Deceuninck-QuickStep) has already found his way to the podium, leading in the chase group on stage 10 of the Vuelta a España to take second place.

The 22-year-old Vansevenant – who is the son of former pro Wim Vansevenant and is named after 1991 Vuelta a España winner Melchor Mauri – got into the break of 31 who stretched out a large advantage on the peloton. Then when Michael Storer (Team-DSM) took advantage of the climb of the second category climb, the Puerto de Almáchar, to strike out into the lead alone Vansevenant was among a group of seven in pursuit.

“We all knew the last climb would be decisive and you could see that’s where the attacks came,” said Vansevenant in a team statement. “We trailed the guy in the front by around 50 seconds at the top, and worked together managing to claw back time, but despite our effort we couldn’t catch him.”

That left the chase group battling for second as they came toward the line, with the numbers now having now been whittled down to four. Dylan van Baarle (Ineos Grenadiers) was leading the quartet as they approached the final 100 metre uphill run toward the line, but Vansevenant came around and held off his chase companions through the line. Clément Champoussin (AG2R Citroën Team) edged out Van Baarle to take third while the final rider in the group, Intermarché-Wanty-Gobert Matériaux’s Odd Christian Eiking gained enough time on the overall to shift him into the lead of this year’s Vuelta.

“In the sprint I had confidence and got a solid second, which will give me the motivation to try again, but I won’t hide the fact I am a bit disappointed as I would have loved to win,” Vansevenant said.

The Belgian started his career as a professional with Deceuninck-QuickStep in the middle of last year, with the rider having put off his cycling career so he could remain at university until he had completed his degree.

Vansevenant then started to really make a mark on the results at the start of 2021, his first full season as a professional, when he began the season with an eighth overall at the Tour de Provence, followed by third at the Trofeo Laigueglia and then he took his first victory as a professional at the GP Industria and Artgianato.

The strong performances continued with a seventh overall at the Settimana Internazionale Coppi e Bartali and 11th at Itzulia Basque Country, though things didn’t quite go to plan at La Flèche Wallonne, when as the last man standing from the early break in the final kilometres he slid out in a turn on the descent and flipped headfirst into a ditch of weeds and bramble. The Vuelta second place is his first Grand Tour and WorldTour podium.

Is Monk Fruit Healthy or Just a Food Fad?

Bea Miller Reveals Truth About Growing Up In Hollywood