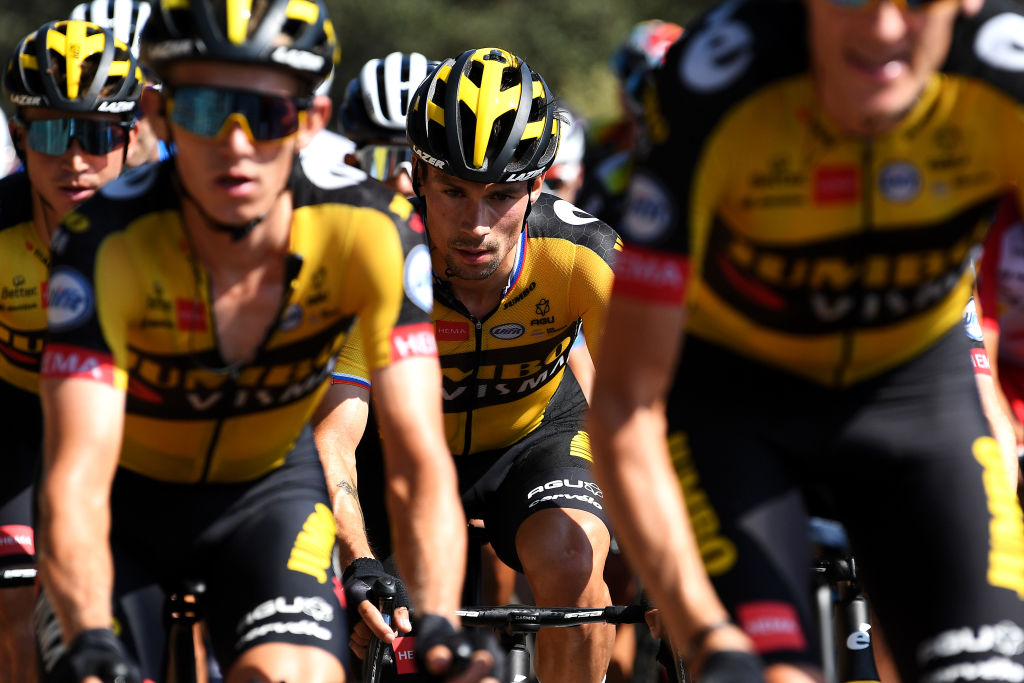 To date Primož Roglič has been strongest in the time trials, and barring isolated incidents, has been superior on the climbs. He is ahead of his main rivals overall. Surely at this point, Jumbo-Visma’s management would sign on the dotted line for Roglič’s GC position to remain the same through to Santiago de Compostela’s final time trial, meaning their strategy for the upcoming mountains is to ride defensively?

However, Jumbo-Visma’s coach and sports director at the Vuelta a España, Addy Engels, doesn’t see it that way. Not with two riders ahead on GC, leader Odd Christian Eiking (Wanty-Gobert-Intermarche Matériaux) and second-placed Guillaume Martin (Cofidis). Even if neither really figured as major challengers for the GC when the race left Burgos, the Norwegian currently is 1:36 ahead of Roglič, while Martin has a 42 second margin. As Engels says, that matters.

“No I would not sign for this situation in Santiago,” Engels told Cyclingnews and Spanish newspaper AS on the rest day. “First, we have to pull back some time. When you look at the guys behind Primož, starting with Mas and going down the list, that gap should be good, though you can never be sure, it’s always strange after three weeks of racing.

“But let’s not forget the guys who are in front. There are some really hard days left to come and maybe because of the stages and the racing, Martin and Eiking will lose time. But it might be necessary to race aggressively to get rid of them.”

At the same time, there are other challengers out there who, if three minutes or so behind, seem to be on the up, like Egan Bernal and Adam Yates (Ineos Grenadiers).

“I already said it a few days ago, a team like Ineos and riders like Bernal and Yates:  never forget them. We’ve seen crazy things in the last week of a Grand Tour. Nobody thought [Chris] Froome would win the Giro three years ago.

“So don’t underestimate them. There’s still a long way to go, and they may be quite a bit behind on GC and if Yates was closer, he wouldn’t do a move like the [attack] he did yesterday [on stage 15 to El Barraco]. And the gain was not too much.

“But if we get to a point in the stage where there’s a long way to go and they can make a difference, those gaps could become bigger. So, of the main competitors, we had when we started, I’m not ruling anybody out.”

Engels confirms that although the second-week crashes were not ideal, Roglič is in good shape and they have not proved a setback for the Slovenian. As he says, “He’s doing well. The bunch split several times on Sunday and he came through in a really good way.”

Engels says that although the situation of having such manic, all-out starts to the stages as we’ve witnessed in the race this year is relatively unfamiliar to the modern-day Vuelta, it isn’t such an abnormal scenario either in this race or historically.

“We see it every day except for the days when it’s supposed to end in a sprint, then we have three guys in front from the same teams. But the other days – it’s brutal. Like 100 kilometres until the breaks go.

“Though I remember when I rode the Vuelta back in 2003 and it seemed like [top Spanish teams] ONCE and Banesto were both about to fold, it was flat-out from the start every day too,” he says with a laugh. “So it’s not new but it is taking its toll for sure.”

As for the two key Asturian stages coming up, he recognises both as crucial, and with similar profiles, “big climbs before and then a really hard summit finish.”

Detailing Stage 17’s and 18’s finales, he says “Covadonga is much more irregular, really steep parts and even some descents. Gaimoniteiru is just brutal, 15 kilometres, always steep from the bottom to the finish. Very different.

“But so much depends on the riders. Sunday’s stage was hard, but on paper it was not a big mountain stage. Yet the way they raced it made it really tough. If they do that on Covadonga or Gaimoniteiru, then for sure the gaps will be really big.”