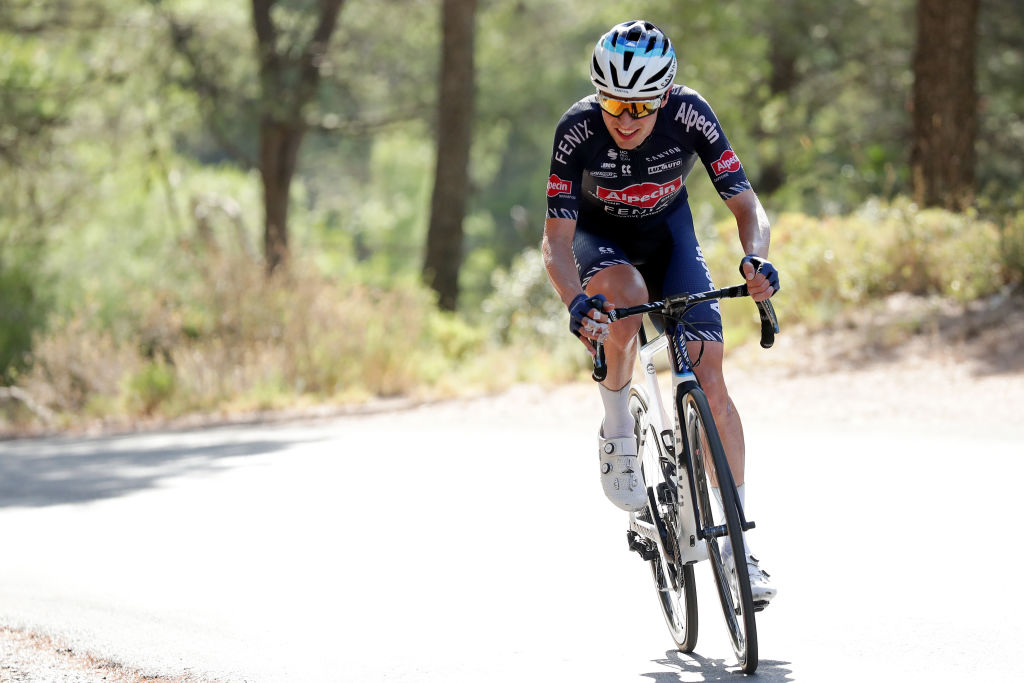 Jay Vine (Alpecin-Fenix) crashed hard at speed during stage 14 of the Vuelta a España after contact between him and a team car but the Australian came back to take a thrilling third place atop Pico Villuercas behind stage winner Romain Bardet (Team DSM) and Jesus Herrada (Cofidis).

The 25-year-old was at the back of the 18-rider breakaway after moving back to collect something from a team car. As he held an object on a downhill section, he lost his balance and touched the car with his handlebars and body as the vehicle appeared to accelerate.

Vine lost his balance and was unable to free himself, going down hard but fortunately avoiding going under the car.

He landed heavily and suffered road rash but race doctors were quick to treat him. It looked as though his race could be over but the Australian was able to continue and he managed to pace himself back to the front of the race before the 14.5km climb to the finish.

The Australian was still in contention for the win as the large group began to split up on the long ascent, and he responded to several key attacks. He was unable to follow when Bardet attacked with just over 6km to go but Vine countered towards the top of the climb before being joined by Herrada. The two worked together and distanced the rest of the break. They were unable to reel in Bardet, who took a fine win, but Vine held on for third place in what is his maiden Grand Tour.

Vine secured his place at Alpecin-Fenix by winning the 2020 Zwift Academy Challenge that awards the winner a professional contract. Vine finished second on the key mountain stage and second overall at the Presidential Cycling Tour of Turkey. His climbing ability helped him impress at the Vuelta a Burgos and so secured him a place in the Alpecin-Fenix team at the Vuelta a España.

7 Things Every Parent Should Understand About Their Child’s Microbiome