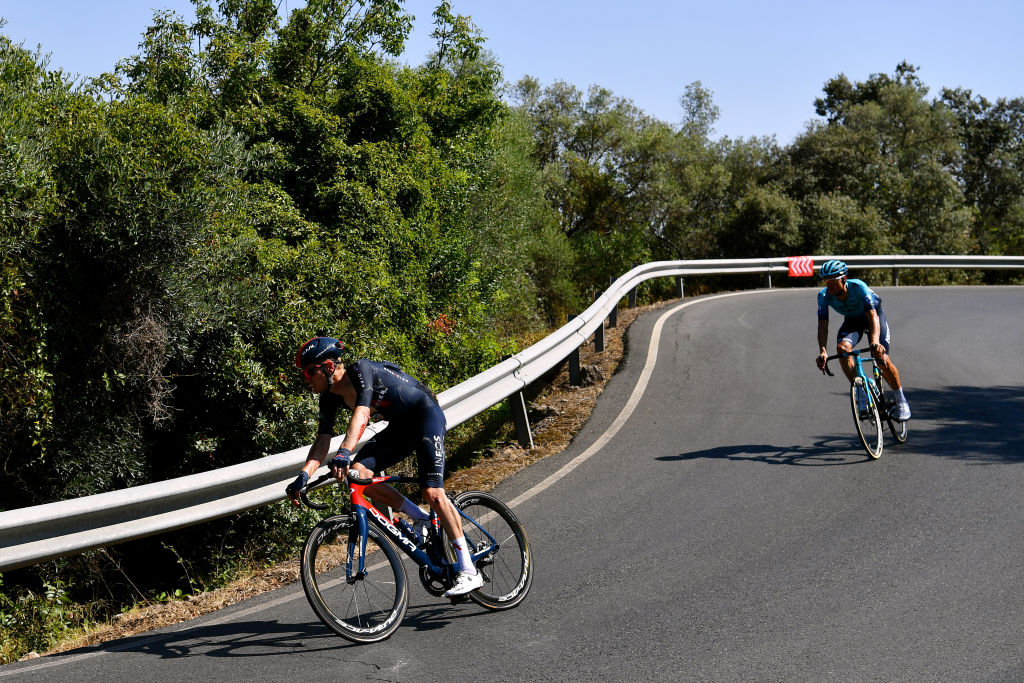 Ineos Grenadiers, one of the teams hardest hit by the crash near the front with more than 50 kilometres to go on stage 12 of the Vuelta a España, said four of its riders, including Adam Yates, sustained some injuries with Dylan van Baarle undergoing a CT scan to check for fractures.

Van Baarle, who could be seen sitting on the roadside with a blood streaked arm for a considerable time before gingerly rising, was the last rider across the line on the stage. Yates, with his eighth place on the overall to protect, was quicker to remount and go in pursuit of the peloton. The Briton finished in 35th place, holding firm on the overall as he finished within the main group, however he didn’t come out of the crash completely unscathed.

“Dylan van Baarle underwent a CT scan on his left hip and thigh due to a crash sustained during stage 12. Results showed no fractures,” said Ineos Grenadiers in its injury update.

“Adam Yates sustained a left calf and shin contusion from the same crash. Both will be reassessed in the morning,” said the team in a statement, which van Baarle retweeted with a fingers crossed emoji above.

Yates is currently sitting 4:57 back from current leader Odd Christian Eiking  (Intermarché-Wanty-Gobert Matériaux) while team co-leader Egan Bernal is in seventh place, eleven seconds ahead of Yates. The pair, perhaps more importantly, are both around three minutes back from defending champion Primož Roglič (Jumbo-Visma).

Roglič was also involved in the same crash, his second in the space of three days, as he along with most of his teammates came down. The rider, however was quick to remount and get back to the peloton while Jumbo-Visma said in a statement that the team had emerged unharmed, with Steven Kruijswijk suffering a few scratches.

The crash happened on the climb of the Alto de San Jerónimo but occurred on a flat section in the middle of the category-3 ascent on a mild left-hand bend. Ineos Grenadiers and Jumbo-Visma were the most prominent of the teams among those who came down but there were also other riders caught up.

Among them was Nelson Oliviera (Movistar) who had his kit badly torn after tangling with barbed wire next to the road, however the team said he fortunately didn’t suffer any bigger injuries than the visible cuts and bruises.

Astana-Premier Tech’s Omar Fraile and Luis Leon Sanchez were also involved. The team said on Twitter that their medical checks didn’t reveal any fracture or other serious injury with both riders set to continue the race, though a final decision would be made in the morning.

Sexy Movies on Netflix in December 2021