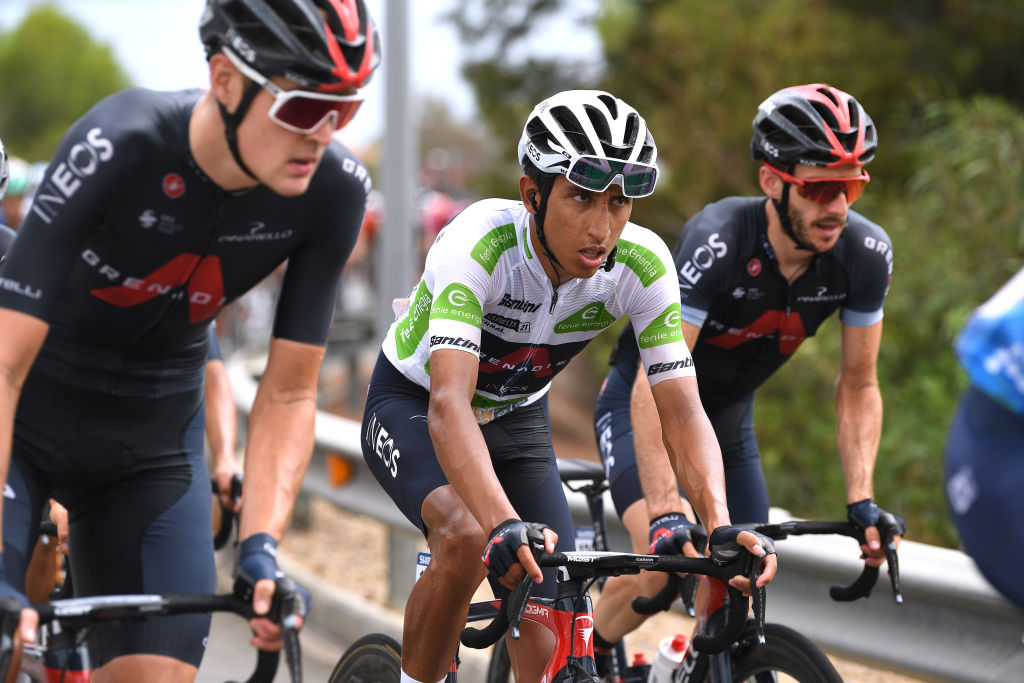 Bernal and teammate Adam Yates both lost time as Roglič forged away, ceding 37 seconds to the Slovenian and other GC rivals at the line even though Roglič crashed and was delayed on the technical, dusty drop down to the finish.

Bernal is now 2:29 behind Roglič, who lost the lead but remains the key reference point in the race, while Yates is at 2:44.

The two Ineos Grenadiers racers also lost the same 37 seconds on their other top three GC rivals, Enric Mas and Miguel Angel López. The two Movistar racers, as well as an increasingly strong Jack Haig (Bahrain Victorious), were all able to bridge across to Roglič after he fell.

Still leading the young rider classification, Bernal commented afterwards that he had tried to get across to Roglič after he had broken away, but he could not maintain the pace he needed to close the gap. Either way, he did not see the day as entirely negative by any means.

“Leaving aside the time loss, of course, I actually felt good on the climb,” Bernal said, “and I had good legs. It was a tough climb, very explosive.”

His decision to chase after Roglič, he said, was due to “a kind of impulsive reaction, one you have when you see a leader go up the road and when you want to follow, you think why not?”

His counter-move, successful or not, formed part of the game, he argued.

“Trying to follow like that, and then not to be able to – that’s cycling. What I take away from the stage is that I felt good.”

Bernal took a similarly broad perspective on the action-packed stage, one that in theory was marked down as a quiet day for the GC racers, particularly with a 31-man move of non-contenders up the road.

“We had to be prepared for these situations. We knew that things could have gone calmly with the break, or that something like this could happen,” he reflected.

Bernal denied that he was waiting for the intense heat of the last week to drop, as it is expected to do in northern Spain to see if he feels in better shape.

“I don’t have such a bad time when it’s hot, and I hope to be good whether it’s hot or cold,” he said. “We just have to take it day by day.”

With the benefit of hindsight, there’s a case for saying Bernal and Yates were perhaps unluckily isolated again in the chase group given Ineos Grenadiers had made an earlier decision to place two of their riders, Dylan Van Baarle and Jhonatan Narváez in the break of the day.

It was the same strategy the British team already tried last Friday with Pavel Sivakov when Team DSM’s Michael Storer– again the winner on Tuesday – captured his first stage of the race.

“They’re doing well and they should have their chances,” Bernal argued about his teammates “We have to go for stages, too.”

As for Wednesday’s ultra-steep finale in Valdepeñas de Jaén, Bernal warned that he would again try not to lose time on the overall “and be up there as much as I can.”

Either way, as Roglič continues to widen his advantage, Bernal’s position in the GC remains high, but is looking increasingly fragile.