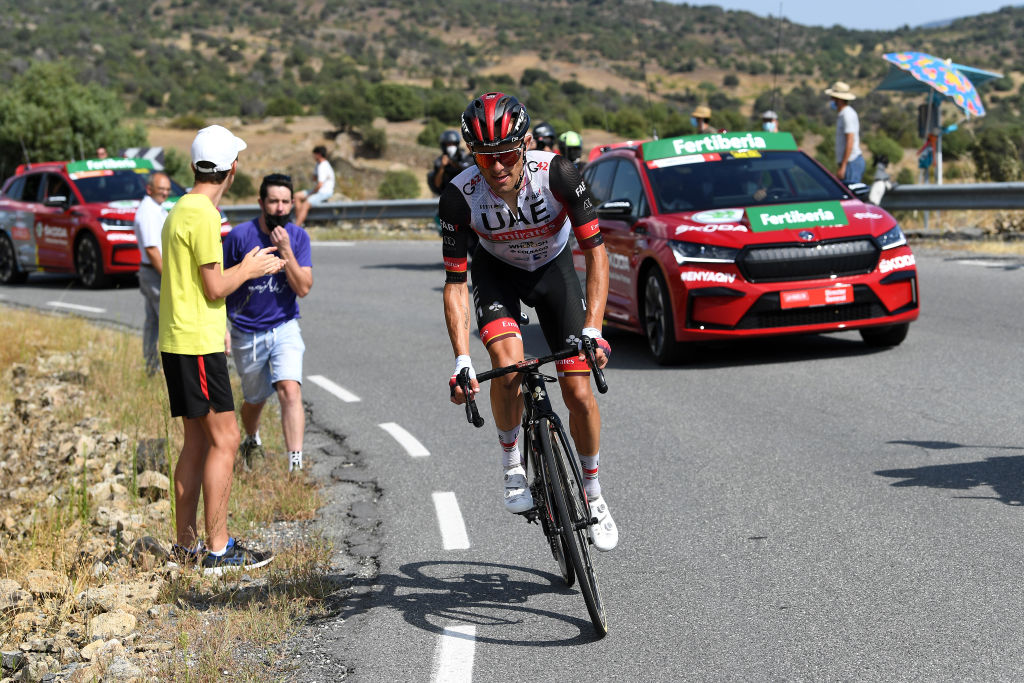 At the end of an 87-mile attack in the mountains, Rafal Majka (UAE Team Emirates) won stage 15 of the Vuelta a España. He finished 1:27 in front of his nearest chaser, Steven Kruijswijk (Jumbo-Visma), who was second. Chris Hamilton (Team BikeExchange) was the next rider to cross the uphill line at 2:19 back in third.

A group of GC riders then followed behind the trio, with Adam Yates (Ineos Grenadiers) in fourth, 2:42 back and race leader Odd Christian Eiking (Intermarché-Wanty-Gobert Matériaux) in sixth 15 seconds later. The Norwegian will hold the leader’s red jersey headed into the second rest day.

Starting in Navalmoral de la Mata and traveling 197.5km to the eastern end of the Sierra de Gredos at El Barraco, Majka rode away for his first victory in four years, riding to honour his father who died recently. It was another brute of a stage with four categorised ascents, including the category 1 Puerto de Mijares.

With 100km to go, Majka was working well with Fabio Aru (Qhubeka NextHash) and stretched their lead out to 2:12. The Polish rider broke free on the Puerto de Pedro Bernardo to take the lead and king of the mountain points, a classification still led by Romain Bardet (Team DSM).

The fractured peloton had multiple attacks on the final climb of the Puerto de Mijares, with Yates gaining a few seconds over the GC contenders, but Majka did not crack.

Watch the video highlights above for the attacks and breakaways.

Best Fall Books for Kids, as Chosen by Educators

15 Best Shaker Bottles That Ensure No Lumps or Leaks 2022