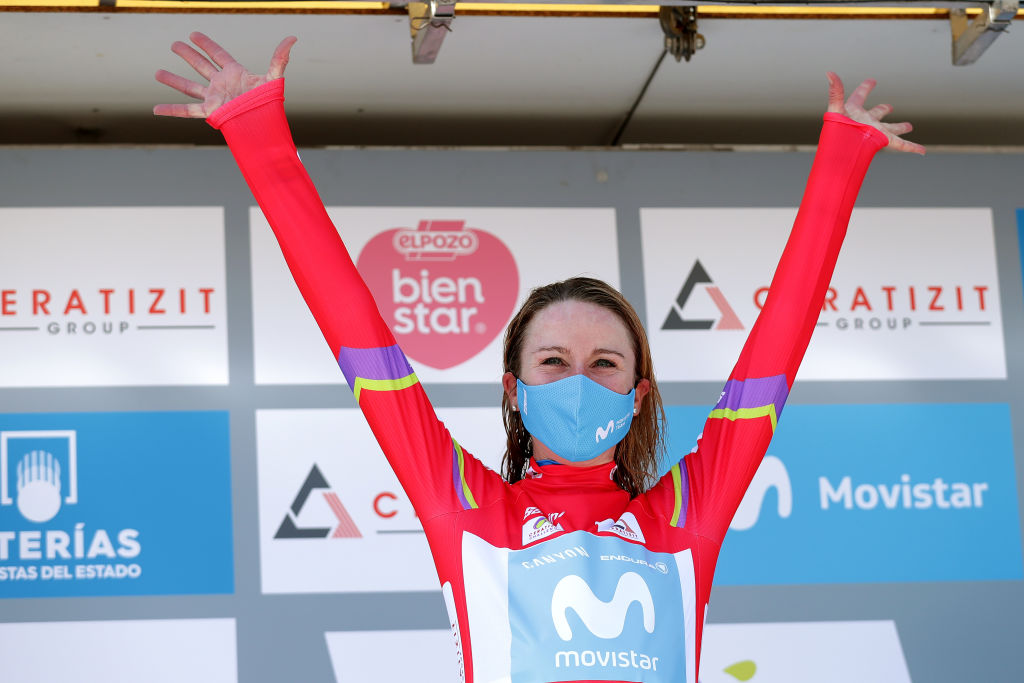 The Belgian beat Elisa Longo Borghini (Trek-Segafredo) to the line after the pair had caught breakaway survivor Leah Thomas (Movistar) within sight of the line after a tough uphill ride to the finishing straight.

Kopecky outsprinted Longo Borghini to take her seventh win of 2021, while Anna Henderson (Jumbo-Visma) rounded out the podium at four seconds back.

“In the beginning it was really hard to get in the breakaway but then there was a big group and we had Sofia Bertizzolo in there,” Kopecky said after the finish.

“She’s also really fast so we put everything on her. At one point, however, there was a split in the peloton and eventually there was another regrouping. I didn’t expect that we would catch the leader, though.

“Longo Borghini went from far out and I also knew that it was a good finish for me.”

Behind the chaotic finish at the front, Van Vleuten finished safely in the peloton to take the overall win, her 12th victory of the season. She wins the race by 1:34 from Marlen Reusser (Ale BTC Ljubljana), while Elise Chabbey (Canyon-SRAM) rounds out the podium at 3:12 down.

The final kilometres of the stage had seen a furious chase as riders sought to catch Leah Thomas (Movistar), the last surviving woman from a large breakaway move that got away at around 50 kilometres into the 107.4-kilometre day.

Anna van der Breggen (SD Worx), Sofia Bertizzolo (Liv Racing), Alena Amialiusik (Canyon-SRAM), and Shirin van Anrooij (Trek-Segafredo) were among the riders accompanying Thomas in the move, which jumped away after a fast and tough start to the stage.

The move never held a large advantage over the peloton, though, and fractured as the riders reached the final 30 kilometres of the stage, with Thomas, Van der Breggen, Amialiusik and Van Anrooij moving clear.

As they hit the final 20 kilometers, the quartet enjoyed a minute lead over the charging peloton, though their advantage only ebbed away as they neared the line. By the time Thomas made her solo move, 10 kilometres out, the gap was down to just 22 seconds with Liv Racing leading the peloton.

Though Thomas’ advantage did jump out to 50 seconds over the following kilometres, she faced a massive challenge to hold the 20-second gap she took into the final two kilometres.

In the end, it was the climb towards the line in Santiago de Compostela that killed Thomas’ chances of a big solo win, as the American was caught just 275 metres from the finish as Kopecky and Longo Borghini blew past her onto the flat.

Longo Borghini led out the finishing sprint on the paved finishing straight, but Kopecky always looked comfortable in the wheel, and finished off the job when she launched her sprint at 75 metres to go to secure the win.

5 Healthy Ways to Eat Eggs for Lunch or Dinner

The Hollidays of Children’s World

Fight Boredom With The Escalator Of Death Challenge