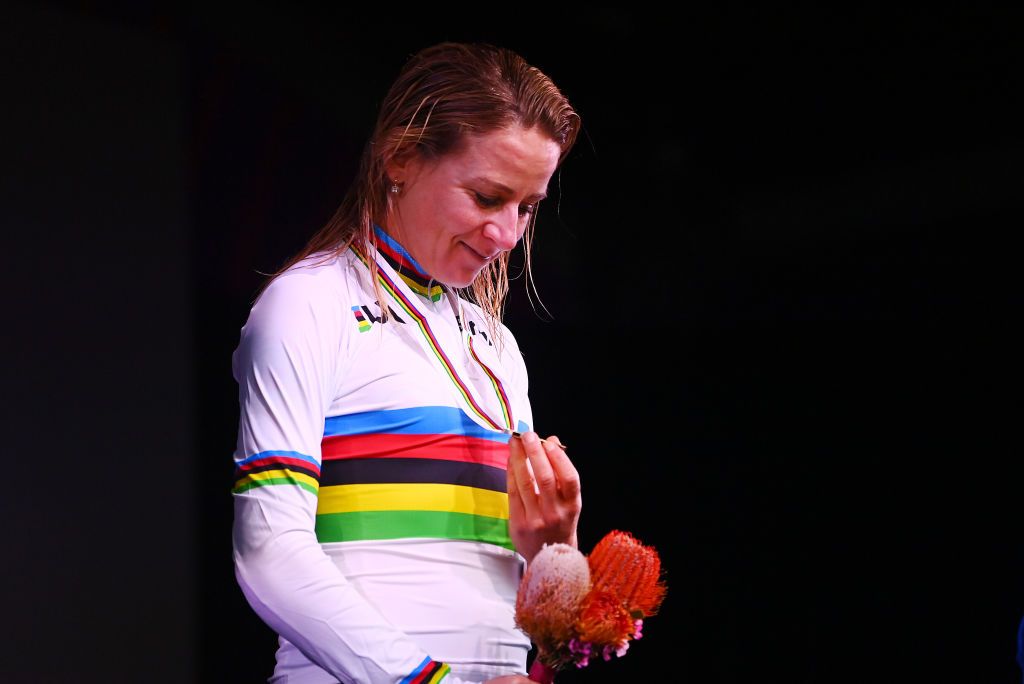 After her barnstorming solo raid in the Yorkshire Dales to claim her maiden World Championships victory in 2019, Annemiek van Vleuten had only 15 race days in the rainbow jersey. But after the “best victory in my whole career” at the Wollongong Worlds, the 39-year-old now has the perfect curtain call to her career, racing her final season in the pro peloton clad in rainbows.

“That is the best,” a delighted Van Vleuten said in the UCI Road World Championships post-race press conference.

“That was also why I was so super disappointed after I broke my elbow. I also knew the course and when they announced the course for next year, I was already sneakily looking at it and how many altitude metres there will be. So I had the feeling that this is my biggest chance.

“So now that I am here and World Champion next year, and can wear the jersey all the time, it’s quite a story.”

As an ephemeral rainbow emerged above the finish line in Wollongong following an afternoon of rain and sun showers, an enduring rainbow jersey awaited Van Vleuten at the finish line.

“I think maybe this is my best victory in my whole career. With the whole week that I have been through, I don’t know. Yeah it is quite a story,” the Dutch rider said in the winner’s press conference, with long pauses punctuating her responses as she came to terms with her victory.

Van Vleuten’s first season in the rainbow jersey was cut short, first by the pandemic and then by a crash at the Giro Rosa that ended with a broken wrist on the eve of her Worlds defence.  A Worlds in which Anna van der Breggen won a year before retiring to ensure a final rainbow season. A feat now emulated by compatriot Van Vleuten.

“That is the best [thing], that every day you have the reminder that you are World Champion,” said Van Vleuten who turns forty in two weeks today. “To take it this year is better than next year, so now I can enjoy it all the time. When I was World Champion and we had the Covid situation I could not race a lot of races in my World Championships jersey. [But] I still trained a lot in my jersey.”

“To race in the rainbow makes me really proud.”

‘Focus on what is still possible’

On Wednesday afternoon, Van Vleuten was laying on the ground in shock. In a split second, her World Championships appeared over after a mechanical caused her to crash less than 20 pedal strokes into the Mixed Relay TTT. Not only was her immediate race over, but any chance of competitively racing Saturday’s road race looked to have sunk as quickly as Van Vleuten’s fall to the ground.

But if there is one rider you don’t write off, it is Van Vleuten.

On Thursday evening at the Dutch team hotel in Sydney, Van Vleuten told Cyclingnews that things can change and there was no need to panic. Her training ride earlier that day had been a success, transferring from the rollers in the hotel to the Sydney streets. The doctors had told her that she would do no further damage to her elbow. Pain would be her only barrier.

Since 2016, Van Vleuten has experienced great setbacks in her career, riding the highest of highs and lowest of lows. The world’s number one rider in the women’s peloton has continued to set targets and achieve her goals despite these setbacks. The secret to Van Vleuten’s success during these latter years of her career when she has won just about every possible race, has been not to dwell on the what-ifs.

At the winner’s press-conference in Wollongong on Saturday evening, Van Vleuten was asked –  how does she do it? How does she keep bouncing back? Pausing, she expanded on how she has developed her mental fortitude through multiple setbacks.

“A skill I developed because of all those shitty moments, is to think in impossibilities. Don’t be negative about what happened,” she said. “A lot of people usually get stuck in what happened. I think all the shitty moments in my career taught me that it’s way better to focus on what is still possible and not look behind, look forward. I think that is a skill I developed quite well.

“But I have to say this time, it was hard to think that it was still possible. I was not thinking it at all and at least I was not negative with my teammates. I tried to be positive and they didn’t see me crying. I just wanted to be a good teammate.”

In the mixed zone after the race, a frozen Ellen Van Dijk was the last rider to leave. The Time Trial World Champion from Wednesday paused to watch the broadcast of Van Vleuten singing along to the Dutch national anthem during the medal ceremony. Before clipping in and wheeling away in search of warmth and celebration, Van Dijk remarked of her teammate, “She is a special human being who keeps surprising everybody, so I wonder what is next?.”

Amazon drone delivery to take off in California