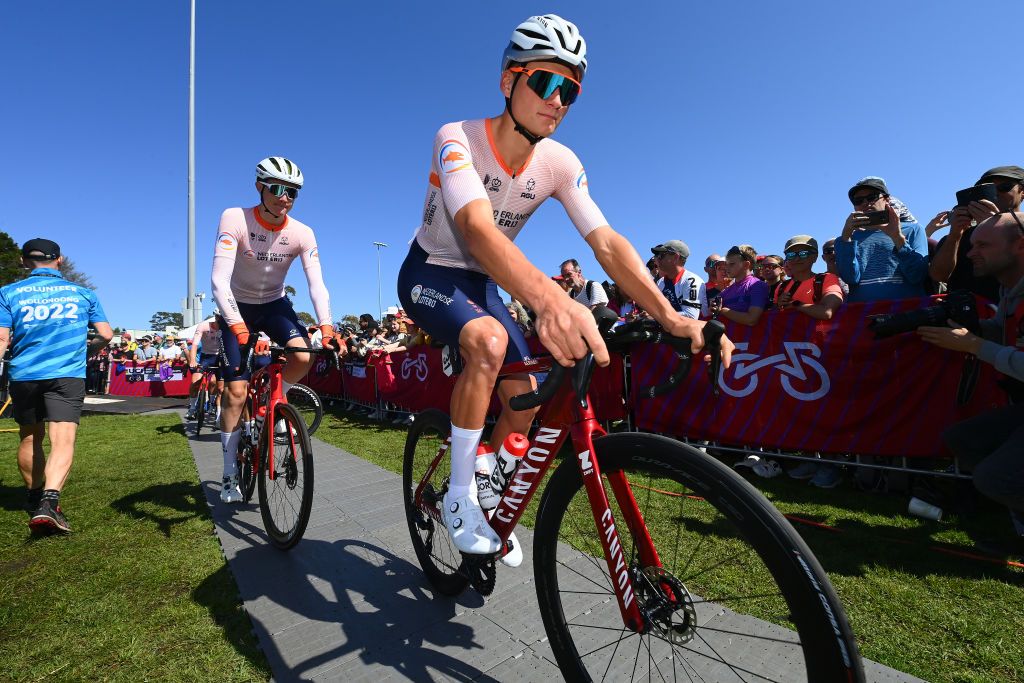 The definition of the so-called spirit of gravel, that most nebulous of concepts, seems to exist entirely in the eye of the beholder, but the unspoken rules of the road were certainly on show in the inaugural edition of the UCI Gravel World Championships, where Gianni Vermeersch (Belgium) claimed the crown.

Mathieu van der Poel‘s dexterity across all disciplines made him the obvious favourite to be fitted for yet another rainbow jersey in his first-ever gravel race in the Veneto, but the Dutchman found himself hemmed in behind the winning move due to the presence of Vermeersch, his teammate on the road at Alpecin-Deceuninck.

Vermeersch had forged clear with some 150km remaining in the company of Daniel Oss (Italy), and the benefits of their alliance of circumstance out in front were amplified by a felicitous confluence of interests behind. A strong Italian team, which included Alessandro De Marchi and Davide Ballerini, hindered the chase where possible, while Vemeersch’s compatriot Greg Van Avermaet and trade teammate Van der Poel were also never likely to marshal a pursuit.

By the time Vermeersch and Oss began the first of two laps of the finishing circuit around Cittadella with 54km to go, their lead still hovered north of five minutes, and it was obvious that the contest for the rainbow jersey was down to just two men.

Behind, Van der Poel was now free to race for the podium as he saw fit, and on the final lap, he helped force an elite group with Van Avermaet, De Marchi and Magnus Cort (Denmark). Only Van Avermaet could live with Van der Poel on the short, muddy kick into Cittadella, but the Dutchman dispatched him in the sprint to claim bronze, 1:28 behind Vermeersch.

“I think it was also possible to win, but that’s the race and it was tactical. Gianni Vermeersch isn’t a countryman, but he is a teammate. For sure, I’m happy for him,” Van der Poel said after the podium ceremony. “When those two went away, it was also pretty obvious that nobody wanted to chase them. When they got five minutes, you know the race is over, so I’m happy I could take bronze.”

Van der Poel never seems to race on any terrain simply to make up the numbers, but his first competitive outing on gravel surely had additional resonance after his travails at the Road World Championships in Wollongong two weeks ago.

The Dutchman abandoned that race early on after being arrested the previous night following an altercation with two teenage girls in his hotel. He was convicted of common assault before leaving Australia, though an appeal is reportedly ongoing. The opportunity to race on gravel here was undoubtedly a welcome distraction.

“It’s good that I had this goal after Australia because otherwise, I don’t think I’d have touched my bike in a very long time. It was good for me to have something to build towards,” Van der Poel said. “I didn’t have the shape I had before, but I think I can be happy with my race.”

At the start in Vicenza’s Campo Marzio, Van der Poel changed aboard the same Alpecin-Deceuninck camper van as Vermeersch, though the eventual world champion was able to slip out to sign on unnoticed while the Dutchman talked a small group of reporters through his decision to take a tilt at another rainbow jersey in the Veneto.

“I think it’s especially cool to be a part of this, it’s a part of history. In a few years, it may also be a big discipline, you don’t know,” Van der Poel said on Sunday morning. “For me, I just hope to have fun out there.”

On the eve of the race, there was understandable disgruntlement among the gravel specialists that the initial start grid order had taken UCI points in road, mountain bike and cyclo-cross into consideration but neglected to do the same for points from the UCI Gravel Series. That oversight was rectified, at least in part, before the off, but the very presence of riders like Van der Poel, Van Avermaet and Peter Sagan meant that this was always likely to be a very different kind of gravel race.

“I don’t know, it’s difficult to say but it’s also good for the sport that riders from a lot of other disciplines take part in it,” Van der Poel said of the minor furore over start grid places. “I think it will also help the sport grow. In a few years, it might also be a really big discipline, so we will see.”

194km later in Cittadella, Van der Poel was upbeat about his gravel debut. “It’s really hard: it’s a bit of a combination between road racing and cyclo-cross, so I think it can grow to be a nice discipline to the future,” he said.

Van der Poel – and the new world champion Vermeersch – will also ride Friday’s Serenissima Gravel, the only such race aimed squarely at pro road riders, though he acknowledged that such forays into gravel were not likely to become a regular occurrence given his prior commitments on the cyclo-cross, road and mountain bike circuits. And yet, even as he spoke, he appeared to warm to the idea.

“The thing is, you can get the same position on the gravel bike as a road bike, which makes it a bit easier to fit into your schedule than a mountain bike race, so it is possible,” Van der Poel said. “But now we have the world champion in the team, so maybe he has to do them…”

Is My House Making Me Sick? Indoor Air Toxins to Worry About

28 Best Board Games for Elementary Classrooms