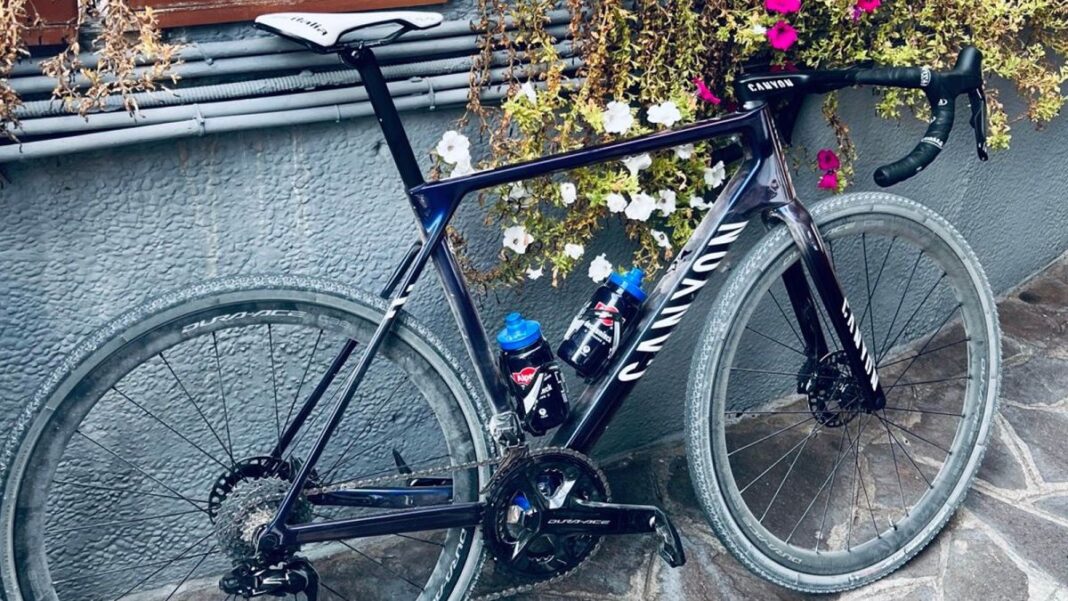 This weekend marks the inaugural UCI Gravel World Championships, yet despite the ever-growing abundance of gravel bikes available from the world’s biggest bike manufacturers, Mathieu van der Poel is set to ride a lightweight, semi-aero road bike for the 194km course, Canyon’s new Ultimate CFR. Choosing not to ride the two more gravel-specific bikes available to him, the Grizl and Grail.

Images of the bikes and a video of Van der Poel in training ahead of the race show the bike fitted with a Shimano Dura-Ace groupset and wheels, eschewing his sponsor’s more gravel-specific GRX groupset. Throw in the same integrated carbon handlebar and stem and aside from the obvious difference in tyre choice, Van der Poel is on his usual road set-up, he even seems to have stuck with his road pedals and shoes.

He’s not the only one. A slew of images shared by Specialized confirms that Peter Sagan, Sina Frei and Sofia Gomez Villafane will be aboard the Specialized Roubaix, the endurance-focused road bike designed for – and named after – the cobbled roads of Northern France.

The 140km and 194km female and male races this year feature around 30% asphalt and are a little more in line with Strade Bianche than anything rockier or more testing. Pro cycling is an arms race and no rider will want to feel they are on a slower bike than their competitors so perhaps road bikes with larger volume tyres fitted will be the order of the day.

Are we seeing the categories of fast gravel bikes and capable disc road bikes bleeding into each other or is this just a scenario where speed will trump all and the pro riders will want the fastest bike for the job at the likely expense of comfort and increased risk of damage?

Gravel and off-road riding is, unsurprisingly, tough on bikes. Most of us would baulk at the idea of taking our best road bike, throwing on a pair of gravel tyres and heading for the rough stuff. Gravel-specific bikes will have more clearance for larger volume tyres and wider rims as well as more comfortable geometry. Road-specific wheels will have slightly narrower internal widths than gravel-specific models which could lead to issues when fitting higher volume gravel tyres. Remember Jumbo Visma and their broken carbon wheels at Paris-Roubaix?

However, it isn’t that unusual to see riders using road bikes in gravel races. More and more road models are able to run 32mm or even 35mm tyres which enable gravel tyres to be fitted with ease. Several professional riders on the gravel circuit have used road-specific frames without issues. Peter Stetina has used a Canyon Ultimate in gravel races before, back in 2020 he used an older Ultimate with some gravel tweaks. Looking back at that particular bike now it’s interesting to see how things have developed in this area.

We’ve also seen Sandy Floren use the lightweight Trek Emonda at Super Sweetwater in 2020 in a similar guise. Fast forward a few years and Lachlan Morton showed what a Cannondale SuperSix Evo could deal with.

Since around 2014, the bike industry has been on a gravel charge, and nowadays you’ll struggle to find a major brand that doesn’t have at least one in its lineup. But if the Gravel World Championship contenders are riding road bikes, does that mean we can ditch the gravel bike and take our road bikes off-road too?

Probably not. The pro athletes we will watch in the race have supreme bike handling skills and will float over sections that we mere mortals would really test our bikes on. They also don’t have to worry about purchasing their own equipment, which always makes things a lot easier, whereas if we were to risk taking a road bike off road and the bike were to be damaged, it would be an expensive fix.

That being said a world championship race is a stern test for any equipment, and perhaps proof that modern road bikes are much more capable all around. Will we see the lines blurring to the point where in a few years we’ll have one extremely capable bike to ride road, gravel and cyclo-cross on with a few tyre options? Perhaps we are already at that point.

What we do know is that some very fast bikes will be on the start lines of the Gravel World Championships races this weekend. Will outright speed dominate or will the course take its toll on the pure road bikes? We’ll know soon enough.