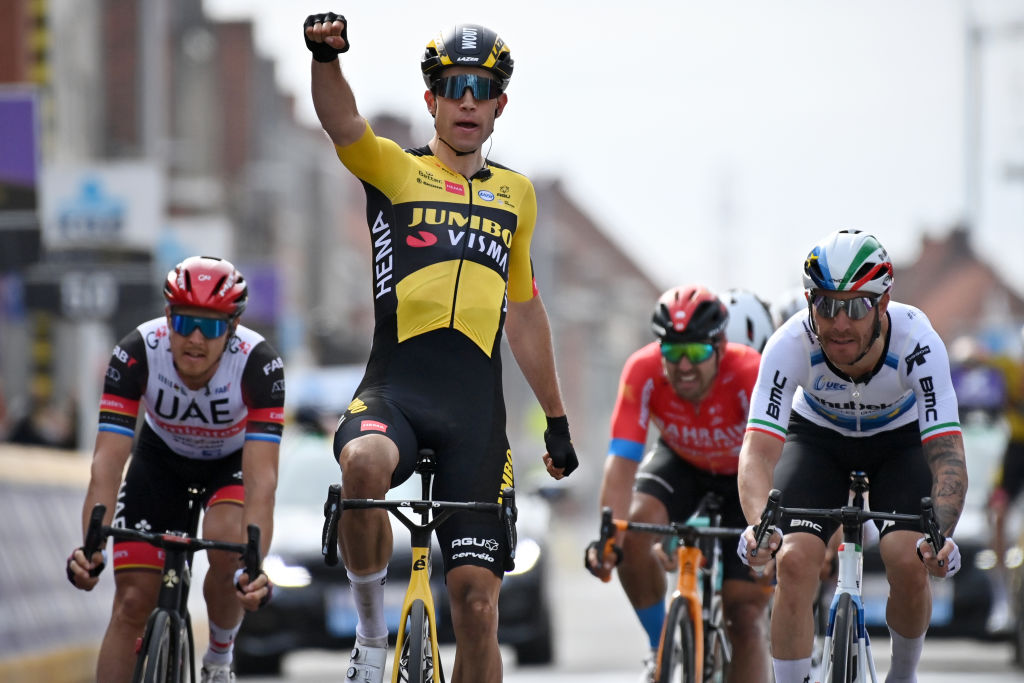 Wout van Aert (Jumbo Visma) is set to target both the road race and the time trial at the UCI Road World Championships in September, with the Belgian also confirming that he will aim to win the green jersey at the Tour de France in 2022.

In a long interview with Wielerflits, the Belgian star confirmed that he would race the Tour of Britain in order to build his form and fitness ahead of the Worlds, which take place in his home country. Van Aert is expected to be the main leader of the Belgian squad.

“My form was obviously not completely gone after barely a week of doing nothing,” he told Wielerflits in relation to a brief break after the Olympics.

“The aim [at the Tour of Britain] is, therefore, to have good legs again soon. And I haven’t ridden too many races in my career where I haven’t shown anything. I’m not going to go crazy like I finished the Tirreno at the beginning of this year. I’m going to take it smart and pick a few rides to test myself.”

“Thanks to the preparation I am doing now, it should be feasible to perform well in both disciplines. I believe I have a chance in both as well. I have certainly not neglected my time trial training, on the contrary. But the intensity with which I now train is mainly with the focus on the road race. Explosiveness is central to this. And that is also necessary if you want to win in Leuven.”

Five of the Belgian men’s team have already been selected for the World Championships with the last few spots still to be announced in the coming weeks. What’s clear is that Van Aert will be the sole leader of the squad with Jasper Stuyven and Remco Evenepoel both given support roles. Van Aert is clearly on board with that strategy and approach.

“I think that I am the only Belgian – except for Jasper Stuyven – who is used to being a leader everywhere within his team. I’ve already proven that I can handle that. I follow the idea of the national coach. In fact, I think it’s good that there is clarity. It would also put more pressure on me if there were several leaders,” he added.

While there are still several goals still to aim for this season the versatile Jumbo Visma rider also has an eye on 2022. His team has already strengthened their Classics squad around him but the 26-year-old also wants to aim for the green jersey at the Tour de France. He has finished fifth in the competition for the last two years but never had the chance to devote himself to the cause due to team duties and the squad’s reliance on working for Primoz Roglic. The Slovenian is set to return to the Tour again next year but Van Aert will be given greater freedom.

“Then the next thing will be the green jersey. I postponed that for two years because there was a higher goal for the team. This year, when Primož Roglič dropped out, I did get that freedom, but I wanted to save myself for and work towards the Games. In retrospect, that was a good choice. But in the future, hopefully next year, that green will become a goal,” he added.

“You also need a team to take the green jersey in Paris. But it is something that has already been discussed, yes. If you go for such a goal, it also brings a good vibe to the team. And I am a rider who can take rides and points without the teammates being bothered by it. We will definitely look into that next year. And we’ll see who can help me with that.”

The Most-Common Regrets From People Nearing End of Life

Here’s What Happened When I Tried Dating in the Metaverse