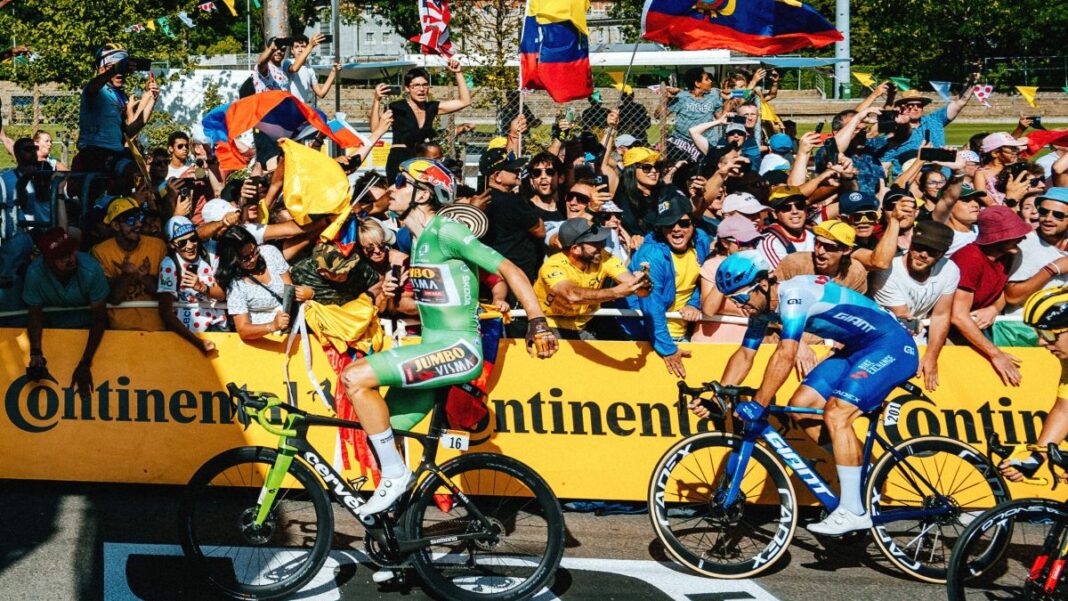 Have you caught your breath yet? It felt like an unusually frantic Tour de France this year, with outright favourite Tadej Pogačar in seemingly unbeatable form in the early stages of the race before being dethroned in the high mountains by a dominant team performance by Jumbo-Visma and the eventual winner Jonas Vingegaard.

As always the racing provides the main headlines, but in the background, there are trends, winners and losers aside from the crop of riders. Disc brakes finally put rim brakes to the sword, and tubeless tyres made big in-roads too against their established rivals.

As well as the nerdy tech trends there was the standard menu of new bikes, strange tech, and special edition kit and paint jobs to gawp at as you imagine yourself as part of the peloton for three weeks.

Battle of the brands

Of all the brands on show at the Tour, only ten can lay claim to a stage win, which is a more diverse selection than the seven from last year.

An extremely dominant showing from Jumbo-Visma meant that this year Cervélo topped the charts with six stage wins, three for the new Cervélo S5 under Wout van Aert and Christophe Laporte, two for the lightweight R5 under the winner, Jonas Vingegaard, and one for the TT P5, also under Wout van Aert.

The defending champion from 2021, Tadej Pogačar, valiantly helped Colnago to second place with three stage wins atop the V3Rs.

Incredibly, considering it bagged a whopping seven stages last year, the giant that is Specialized only managed two stages – the first two – this time around.

By playing a part not only in Jumbo-Visma’s stage wins but also those of Ineos Grenadiers and Alpecin-Deceuninck, Shimano sits head and shoulders above the other wheel brands with eight wins, twice as many as it had last year. It would have been nine had Van Aert not run Reserve wheels (a sister brand to Cervélo) on his TT bike for the penultimate stage.

As with the bikes, the Italians came in second, with Campagnolo picking up three wins under Pogačar, and one more under Bob Jungels.

This is big news: More than half the stages on the 2022 Tour de France were won on tubeless tyres.

The same number of stages, 11, were also won by riders using Vittoria tyres, though not the same eleven.

This wasn’t a case of a single brand using one system and skewing the results either, as Jumbo-Visma used a mix of both tubulars and tubeless depending on the terrain; tubulars for Vingegaard’s high mountain victories, and tubeless for Van Aert and Laporte on the flats.

Pogačar and Jungels were still resolutely flying the flag for inner tubes on their Campagnolo wheels, but it’s beginning to feel like, despite posh TPU inner tubes being used, it’s a dying tech, along with tubulars. Specialized teams have moved away from the brand’s ‘inner tubes are faster’ line and have gone tubeless too.

An honourable mention has to go to the set of GP5000 S TR tyres that Tom Pidcock descended like a man possessed on to set himself up for a historic victory on Alpe d’Huez.

Sixteen stage wins again for Shimano this year, which isn’t a huge surprise given it’s the largest equipment sponsor. Pogačar and Jungels again teamed up to ensure second place went to the Italian contingent, and Mads Pedersen saved the blushes of SRAM by bagging them a single-stage victory. This is the second year running that the Americans have only netted a single win. Considering Campagnolo only had three teams in the race, compared to the 16 of Shimano, it has a better strike rate despite fewer actual wins.

For stats nerds, this is exactly the same split as the 2021 edition of the race.

Pour one out for the valiant rim brake, for its time at the very top of the sport is done. This is it. It’s finally happened. Every stage of the 2022 Tour de France was won on disc brakes, and the eventual winner rode discs for every stage of the race.

Despite the best efforts of Chris Froome in video format, and a few wins from Pogačar last year, it’s time for some of us to admit defeat.

Wins and losses for new bikes

The new Trek Madone and the new Cervélo S5 were the only new bikes to bag a stage win, with the new Pinarello Bolide, Colnago TT-1, Canyon Ultimate, Cube Litening, and KTM Revelator coming away empty-handed.

All the tech and trends from the 2022 Tour de France

How To Make Sage Bundles with Christmas Tree Sprigs