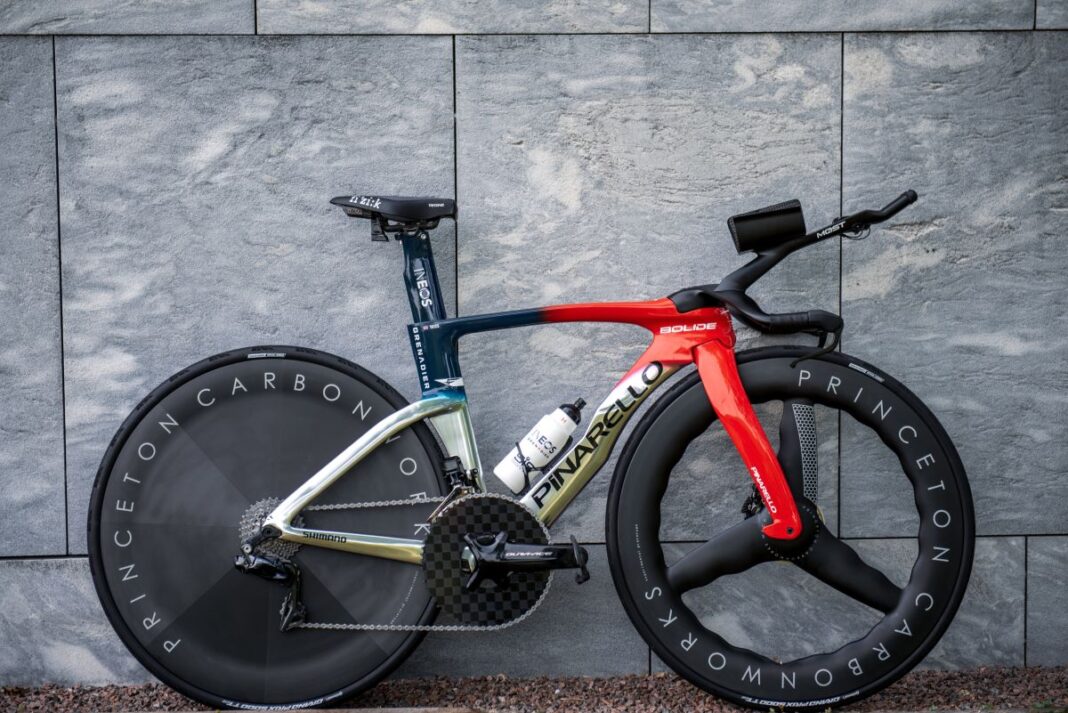 This year’s pre-Tour de France plethora of bike launches has been a wild one so far, and among the flurry of feasts for our eyes, Pinarello went public with its all-new time trial bike, the Bolide F.

We first spotted the new Bolide F beneath Geraint Thomas and Dani Martinez at the Tour de Suisse. In a bid to camouflage the bike’s contours, Pinarello had covered it entirely in a repeating ‘Bolide’ wordmark to create a sort of camo pattern more often found on unreleased cars. It was anything but subtle.

Despite the camo, we were able to discern many of the bike’s aesthetic details. The switch to disc brakes is the most noticeable change, but according to the brand, this meant its engineers started on the back foot with regards to the bike’s aerodynamic performance. To offset this, it looked to the Dogma F for clues and the resulting bike bears a striking resemblance to its new stablemate. Nonetheless, it paid off, as the new Bolide F is the fastest bike Pinarello has ever made, according to the brand’s claims.

Its first chance to prove its credentials will fall on the stage 1 prologue of this year’s Tour de France, where Dani Martinez, Geraint Thomas, Filippo Ganna and Adam Yates – in that order – will ride it around the 13.2km Copenhagen circuit. Given the rain is due to come in the latter half of the afternoon, three of the four will be hoping to beat the clouds in order to maintain a strong position on GC. Ganna is the hot favourite to take the stage, and with it the yellow and green jerseys of the race leader and sprinter’s competition, before he settles into a domestique role.

Ahead of the stage, we headed to the Ineos Grenadiers hotel and spent some time with Adam Yates’ bike to uncover as many of the new bike’s details as we could. You can find them all in our gallery below.

During our time at the Ineos Grenadiers hotel on Thursday, team mechanics had Ganna’s bike in the workstand, putting the final touches in place. Thankfully, we were allowed into the truck to get a few photographs while they worked.