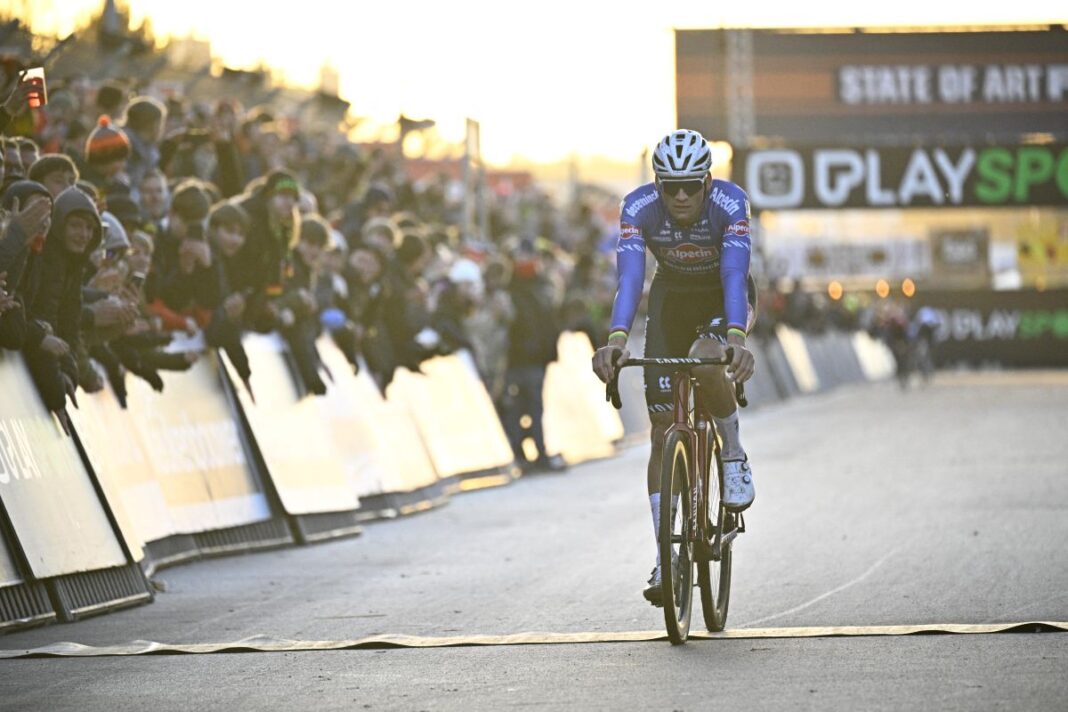 Long-time adversaries Wout van Aert (Jumbo-Visma) and Mathieu van der Poel’s (Alpecin-Deceuninck) cyclocross abilities are so well-matched it only takes a slight technical error to have the pendulum swing in favour of the other.

Take Tuesday’s Superprestige Heusden-Zolder in east Belgium, for example, when Van der Poel, fresh off a solo victory against the Belgian champion at World Cup Gavere the day prior, fell victim to two technical slip-ups, causing the Dutch star to cede victory to Van Aert in a thrilling two-up sprint on the motorsports tarmac of Circuit Zolder.

Racing on home soil, Van Aert took the win on the second day of Kerstperiode, a period of cyclocross racing that crams 10 prestigious races into the two weeks around Christmas and the New Year. Van der Poel, who slipped out of his pedal during the crucial moment, had to be content with second place. Lars van der Haar (Baloise Trek Lions) took the final spot on the podium.

After leaving their contenders behind on the first lap, it was a game of back-and-forth between the two cyclocross superstars on a muddy and technical course. Van der Poel, hoping for a solo victory like the day before, took his chance to shake off Van Aert with an acceleration before a muddy descent. His move failed, and the Alpecin-Deceuninck was left to crawl back into contention after going off course into the trees and placing a foot in the sand. Van der Poel eventually made it back to Van Aert’s wheel, but the chance for a solo post-up was virtually gone.

Everything was gearing up for the two riders to sprint drag race style down the Zolder raceway, but Van der Poel, his cleats caked with sand and mud from his earlier misfortune, came out of his pedal during the wind-up for the line.

“I tried to make the difference on the last technical part. That didn’t work, so a sprint followed,” Van der Poel told Sporza.be. “I’ve felt for a long time that we were evenly matched, but, unfortunately, I shot out of my pedal. I’m disappointed that I wasn’t able to try (to sprint). Zolder is a difficult race to drive someone off the wheel who is just as good. On to tomorrow.”

Van Aert was happy with how he read the Zolder match-up with his rival. He went into the final lap behind Van Der Poel and played his cards conservatively, which paid off on a notoriously tricky course to shake off evenly matched riders.

“In the last part of the lap, (Van der Poel) kept putting pressure on me, but I was able to keep my cool this time and avoid the mistake. I am very happy and very proud of this victory,” Van Aert said to Sporza.be after the race. “The feeling was already a lot better today (referring to World Cup Gavere the day before)”. “I think I took a little too much rest last weekend. I’m used to so much volume that two rest days might be detrimental to the legs.”

The two riders will have another chance to battle it out Wednesday night at Superprestige Diegem. The elite men will start at 8:45 p.m. CET.