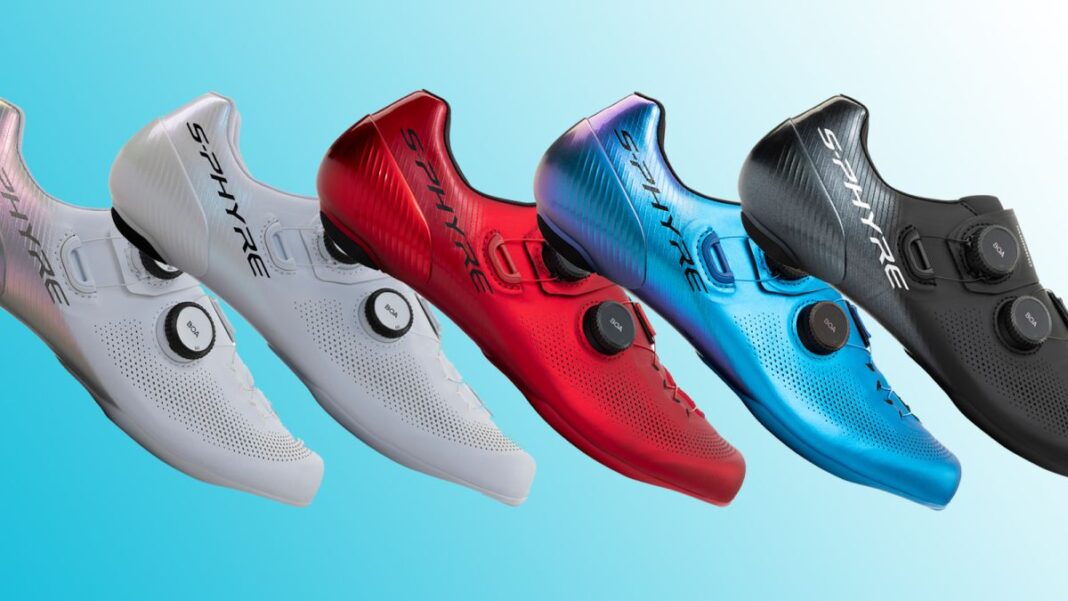 It hasn’t been the best-kept secret in the history of cycling, but Shimano has had a new version of its top-tier S-Phyre road cycling shoes in the works for a while now, and today marks their official launch.

The shoes, which will be called the Shimano S-Phyre RC903, have been in use by Mathieu Van der Poel for the entirety of the 2022 season. They also broke cover in a slightly more official capacity at Eurobike in July, but even there, the details were sparse. Only today are we being given the full lowdown on what will become the best cycling shoes in Shimano’s range.

The launch comes just two years after that of its predecessor, and it does so with claims of reduced weight and improved comfort, as well as a redesigned routing for the Boa retention cables.

The launch will be accompanied by the S-Phyre RC903W; a women’s version that benefits from the same features, but in a women’s specific last shape that is said to be narrower and more in line with the shape and contours of women’s feet. The RC903W will also get a unique white-silver colourway.

No doubt related to the aforementioned improvement in comfort – the RC903 also gets a ‘refined toe box fit’. This is notable because when their predecessor, the RC902, was launched in 2020, it caused some unrest among Shimano loyalists. It adjusted to a narrower toe box when compared to the earlier RC901 and required many riders to size up, something many learned after committing to the purchase. There’s no confirmation from Shimano as to whether the refinement is a return to the previous shape, but it’s something buyers will need to consider when choosing.

Like the outgoing RC902, retention is taken care of by a pair of Boa Li2 dials, with the upper dial securing the wrap-over strap and the lower dial handling forefoot tightness. However, the cable routing for the lower dial is adjusted; the plastic cable guides are replaced with fabric, and the cable crosses over itself twice instead of once. This will result in each click of the lower dial offering half as much adjustment, meaning wearers can adjust the fit in smaller increments.

Elsewhere, the rear of the shoe has also seen an update. A new heel cup is visibly more integrated, colour-matched to the rest of the shoe, and along with an update to Shimano’s Dynalast on which the shoes are made, sees an expanded fit range. Compared to the previous versions, Shimano says the RC903 will “accommodate a wider variety of foot shapes and sizes”.

While the previous model was available from EU36 to EU48, the new RC903 model starts at EU40. It continues up to the same EU48 maximum, and half sizes are available from 40.5 through 46.5. It comes in four colours: red, white, blue and black.

The women’s model starts at EU36 and is available in full sizes through to EU44, and is only available in white, fading to silver at the heel.

It’s Not Summer Without You Book Spoilers

What is Yoga? • Yoga Basics