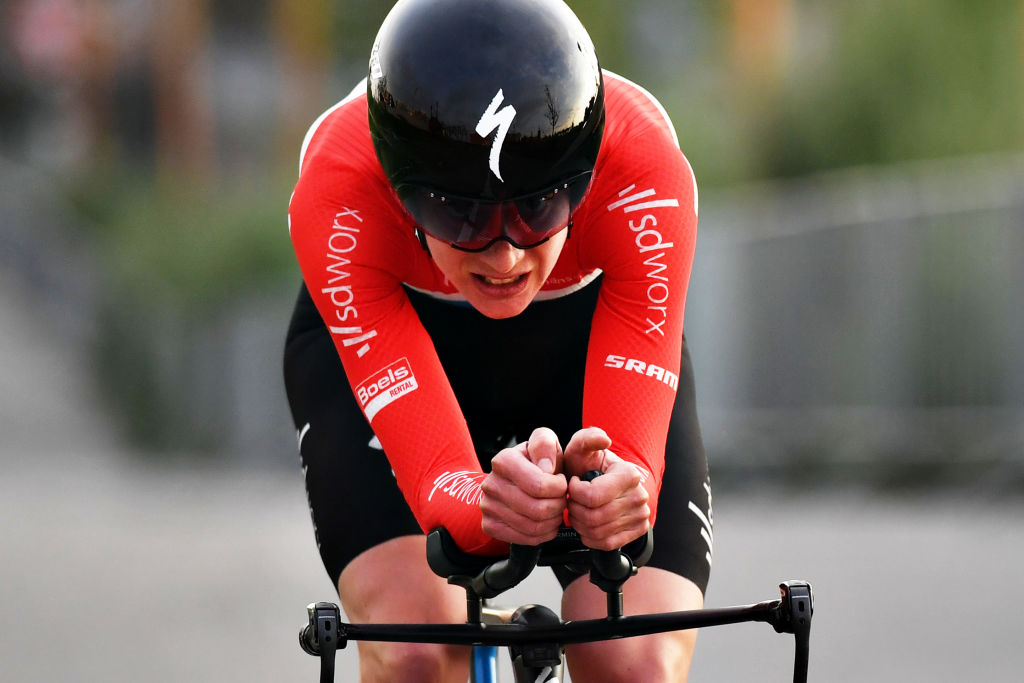 SD Worx will be lining up at the Simac Ladies Tour with defending champion Christine Majerus in its ranks but the rider from Luxembourg says she isn’t likely to be the one they are backing for the overall win this year, with the stage 2 time trial key to the GC pecking order.

The SD Worx roster for the 6-day tour, which starts with a prologue on Wednesday, also includes 2016 winner Chantal Van den Broek-Blaak – who will be returning to racing for the first time since the Giro d’Italia Donne in July – Elena Cecchini, Lonneke Uneken, La Course winner Demi Vollering and Dutch national champion Amy Pieters.

As is usual for SD Worx, it has a team loaded with a number of potential race winners but the course this year means the road and time trial champion of Luxembourg doesn’t think she is one of them. Majerus sees a stage victory at the 23rd edition of the tour, which was formerly known as the Boels Ladies Tour, as a more realistic goal for her as while the 2.4 kilometre opening prologue may not open up the gaps too widely, the length of the stage 2 time trial presents a substantial hurdle.

“The Ladies Tour always is a pretty open race, because the last few years it didn’t [have] a really long time-trial,” said Majerus in a team statement. “This year there is a 17 km long TT, so that might be decisive for the GC. We have to see who of us is up to do a good TT.”

“Personally, I don’t have any goals on defending the title or going for the GC, because I know I’m a little bit limited in longer TT’s. But I’m still looking forward to have a good result in one of the stages. For the rest, I will do the best to help the team to victories or GC results.”

Time trial form is a bit of an unknown through the field, as events which include a race against the clock are few and far between at the best of times and, going into the second season of COVID-19 pandemic interruptions, the opportunities over the past 18 months have been even slimmer than normal. The very top time-trial riders have, however, recently had the Tokyo Olympic Games.

Marlen Reusser of Alè BTC Ljubljana, who is shifting to SD Worx next year, has clearly marked herself out as a rider to watch in the race against the clock by claiming silver in the Olympics time trial. Reusser is the only medallist at the event as Annemiek van Vleuten (Movistar), who won the race in 2017 and 2018, is sitting out the event along with Anna van der Breggen (SD Worx).

Van der Breggen is always the most obvious time trial candidate for SD Worx, given she is the reigning world champion in the discipline, but in her absence the team’s top contender to open up the gap during the stage 2 individual time trial in Gennep is a little less clear cut.

The 30 year-old Pieters – who will be racing in her Dutch champions jersey for the first time after having taken a break from racing on the road to turn her attention to track at the Olympic Games – came second in the 14.4 kilometre time trial at the Healthy Ageing Tour in March this year. Vollering also came second in the stage four Giro d’Italia Donne time trial, although it was a climb heavy course which played to her strength, and she came sixth in the race against the clock at the National Championships.

Apart from that climb heavy time trial at the Giro d’Italia Donne, where Van den Broek-Blaak’s focus would have undoubtedly been on conserving energy for another day, it’s been a long time since we have seen how the former road world champion fares in the race against the clock. Still as a rider who has a bit of a habit of pulling out big performances when it matters Van den Broek-Blaak should never be discounted.

The Backroom: Another disruptive holiday season