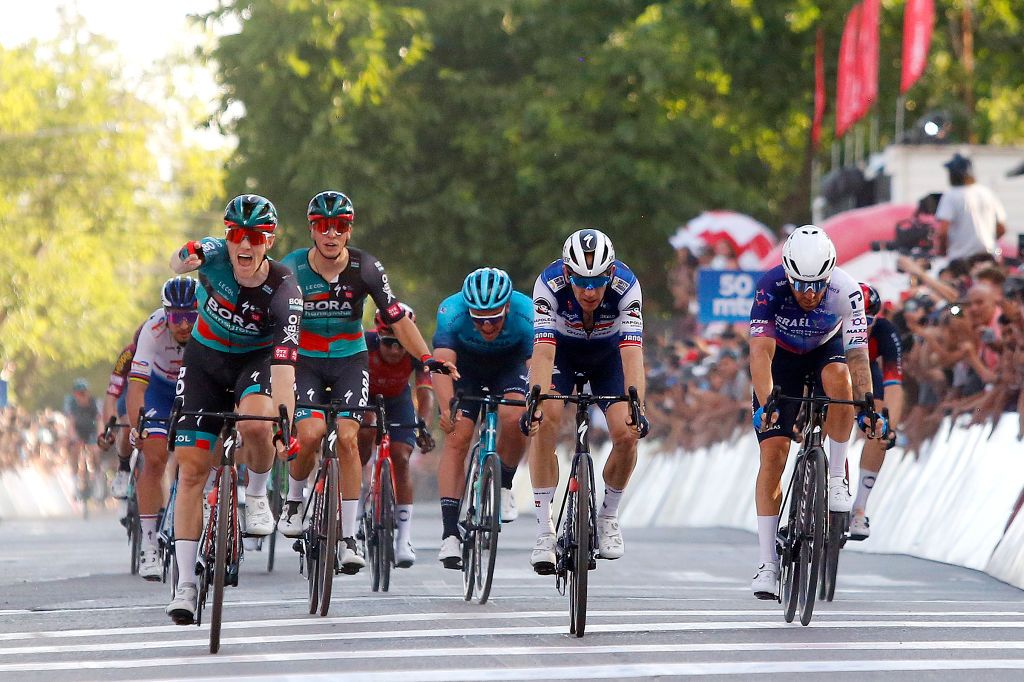 Sam Bennett (Bora Hansgrohe) got his season off to a perfect start by winning the opening stage of the Vuelta a San Juan ahead of Michael Mørkøv (Soudal-QuickStep) and Giacomo Nizzolo (Israel-Premier Tech).

Soudal-QuickStep’s train was caught out when the road was split by a traffic island with a shade over a kilometre to go, leaving Mørkøv to sprint in Fabio Jakobsen’s place. Bennett’s Bora-Hansgrohe guard endured no such issues, with Ryan Mullen and then Danny van Poppel – himself fourth on the stage – delivering the Irishman into the finishing straight.

“I worked really hard this off-season, and I know my teammates did too,” Bennett said, who took the event’s first leader’s jersey. “I didn’t have the best season last year, and I’m just delighted to start off the season with a win here, and to return to my old self, and start the season on a high with my teammates.”

A crash disrupted the organisation of the main lead-out trains with eight kilometres remaining, causing gaps to open up in the long line of riders charging through the city streets of San Juan, but the sprint grandees made it through unscathed.

Total Energies swept the peloton through a right-hand turn with 2.5km to go, their sprinter Peter Sagan sat comfortably in the third wheel, before world champion Remco Evenepoel (Soudal-QuickStep) took over with a searing turn that lined out the bunch.

Soudal-QuickStep’s show of strength was striking but not lasting. Evenepoel and Jakobsen were caught on the wrong side of that fateful traffic island, forcing Mørkøv to contest the sprint against his old teammate Bennett. “When I knew we lost Fabio, I had to try to sprint against Sam myself,” Mørkøv said. “For us, it wasn’t perfect today.

Instead, it was Van Poppel who delivered the note-perfect lead-out out of the final bend before Bennett launched his sprint from distance. “The hardest point was when my lead-out man kicked, he went so hard I almost lost the wheel,” Bennett said. “But when I hit the front, I felt quite good and that gives me confidence for the days coming up.”

After two cancellations due to the coronavirus pandemic – “two years without joy,” per local newspaper El Diario de Cuyo – the Vuelta a San Juan formally returned to the international calendar on Sunday.

The previous evening, the 155 riders had sat through an opening ceremony and fireworks display with a running time almost as long as stage 1 itself, but therein lies part of the charm of this race, which offers a rare and welcome point of confluence between the WorldTour and the South American Continental circuit.

On Sunday afternoons at this high point of the Argentinian summer, sanjuaninos tend to congregate to the west of town at the reservoir at Dique Ullúm in search of some respite from the heat. It was only fitting, then, that the opening stage of the Vuelta a San Juan brought the peloton on a route around the shores of the reservoir as the sun began to dip languidly over the Sierras Azules.

The twin climbs of Las Vacas after 56km were the only ascents on the route, but the gusting wind so prevalent in the province was, in truth, the day’s most feared obstacle as the peloton gathered on the start line. Donde todo empieza­ – ‘where it all begins’ – is the organisation’s tagline for this year’s race, and it all began in familiar fashion, namely with a blessing from a local priest in the shadow of Estadio Aldo Cantoni and a tense, brisk run through the neutralised zone.

The WorldTour squads were content to allow them some early leeway, and the group quickly established a lead of three minutes before the bunch gradually began paring their advantage back down again.

Out in front, the unity of the break began to fray on the day’s brace of climbs, and it unravelled further in the final 50km, by which point Tarozzi and Velardez were the last men standing.

Behind, Movistar and TotalEnergies picked up the reins of pursuit, keeping the leading duo’s advantage hovering around the one-minute mark.

With 23km remaining, Tarozzi and Velardez’s adventure came to an end, with Jakobsen’s Soudal-QuickStep guard and Bennett’s Bora-Hansgrohe cohort by now among the coalition of teams endeavouring to tee up the inevitable bunch sprint.

The anticipated Jakobsen-Bennett duel never materialised, but Soudal-QuickStep and Bora-Hansgrohe will inevitable joust again before the week is out. On Sunday evening in San Juan, Mørkøv knew there was little he could do against Bennett’s speed. Asked what he had lacked to beat Bennett, the Dane allowed himself a wry smile: “I missed my sprinter.”