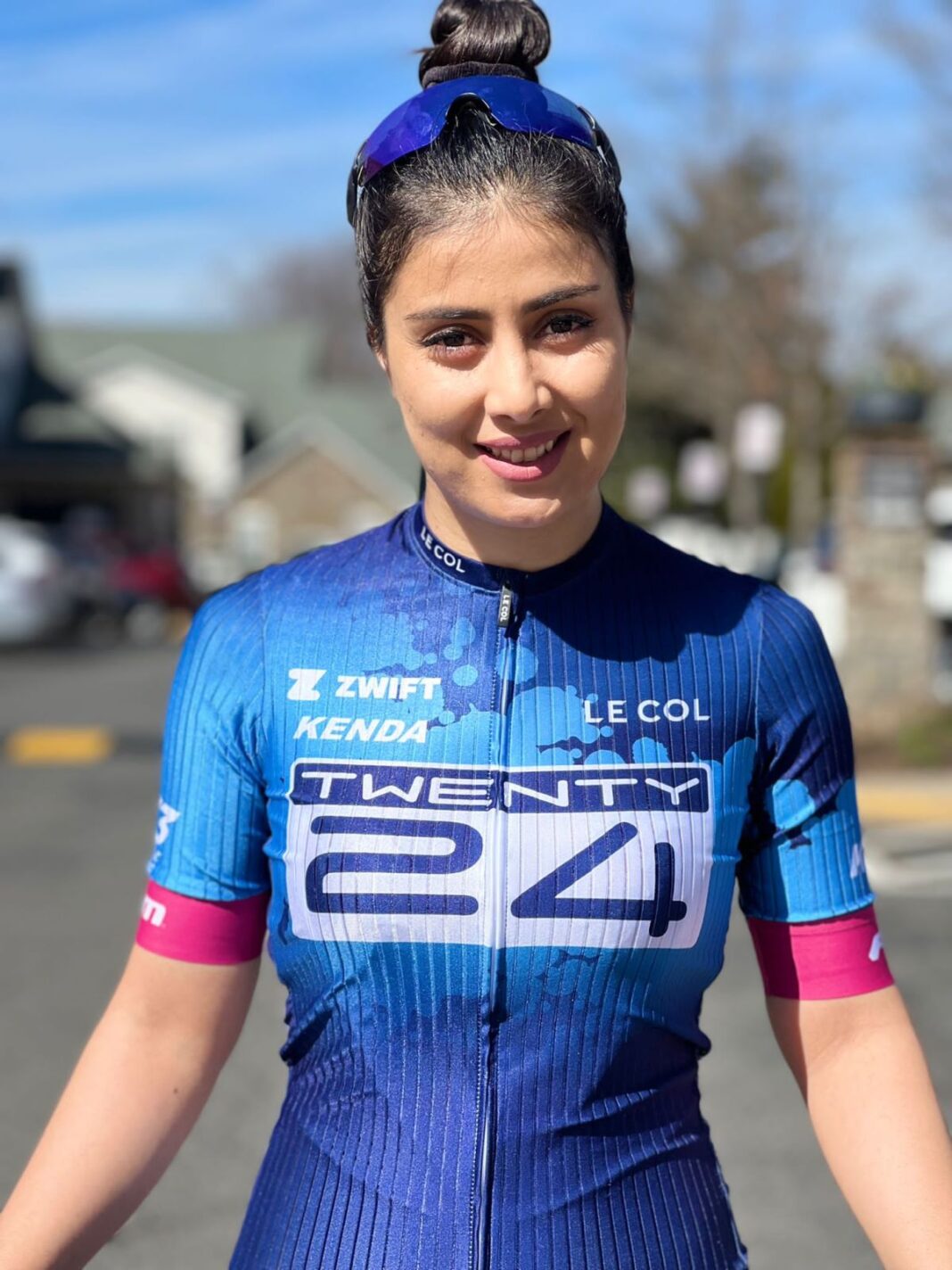 Rukhsar Habibzai is the founder of Cheetah Cycling Club and captain of her nation’s first women’s cycling team, a group of ground-breaking women cyclists who were nominated for the Nobel Peace Prize in 2016 for their bravery and courage in defying gender taboos in Afghanistan.

Born in the province of Ghazni, Habibzai was completing the dentistry programme at Cheragh Medical University located in Kabul when she was forced to leave her country as part of the mass evacuation of vulnerable citizens who faced targeted gender violence by the Taliban. Now living in Virginia, Habibzai is a dental assistant and racing for Virginia’s Blue Ridge TWENTY24 Cycling Team in 2022.

On warm afternoons and sometimes late nights, my mom would tell me of her grim memories of when the Taliban took control of Afghanistan for the first time in the 1990s. She would talk about the fear and panic spreading like wildfire across the country, about how most people fled, leaving full houses behind.

She spoke about how the Taliban closed the doors of education for girls and women and, how women were not allowed to go out without a male escort, how a woman had to cover every inch of her body so as not to distract or scar the holy faith of men who looked at them. Seeing a woman getting lashed or beaten with a stick in public had become – and still is – commonplace.

She spoke of the ‘warriors,’ female teachers, who risked their lives to continue reading, writing and teaching in secret.

In Afghanistan, women were – and in many ways still are – viewed as objects to satisfy men. They were, and still are, the caretakers for the kids, the cooks, and the cleaners. They often receive the blame for much of the wrongdoing in the world. Society expected, and still expects, silence from Afghan women.

At that time, the Islam religion, which allowed women to be educated and work, lost to the culture that catered to the vices of a male-dominated society won.

When my mother used to tell me stories from the Taliban rule over Afghanistan between 1994 and 2001, I often wondered how a society could progress without women and how a city like Kabul could remain beautiful without the influence of women. In many ways, our women educate the next generation of society.

Women and girls contribute to the building of any society, and if a woman remains uneducated and unable to work, this society should fear what it has lost.

I asked my mother to tell me her worst memory of the previous Taliban rule, and she told me of a day she ventured into the city alone, and the Taliban stopped her and questioned why she was without a male-relative escort. They degraded my mother and called her many bad words.

My mother tried to explain that she had come into the city to buy medicine for my brother, who was sick. At that time, he had heart disease, so my mother had to buy him the necessary treatment. She worriedly walked to the city because her son’s health waned from the pain in his chest.

My mother said that she asked the Taliban why they chose to humiliate her when she needed to provide medication for her son. The Taliban checked her pockets and saw that she had already picked up the medication. They warned her that if she left the house again without male-relative supervision, they would deal with her lawfully, which meant physical punishment.

My mother returned home crying under the burning sun. When she got home, she saw that her son’s health had worsened. My brother always told my mother that he would die if he stayed in Afghanistan. He wanted to go to Pakistan, but because we did not have a good economy, we couldn’t afford to take my brother to Pakistan for the necessary treatment.

Upon the arrival of the Taliban regime, she lost her son, my 14-year-old brother. Many migrated to neighbouring countries and the economy went downhill.

People became miserable, especially Afghan women, who were left far behind and suffered a lot. There are still some videos from the first period of the Taliban regime physically harming women in the streets. It’s heartbreaking that women have missed the means of an entire generation.

The Taliban fell in 2001 when parts of our nation were bombed by American forces. However, a new government arose from the destruction. Women became part of society and were free to go places independently without questions.

Kabul had been destroyed, but schools opened for girls over time, and even without facilities, they continued their studies under a tent without chairs. Women began to be present in ministries, government and personal offices and worked in the parliament. They were involved in sports and the music industries. Some Afghans even sent their daughters to foreign countries for education.

Some people fought against such change and attacked Kabul University and girls’ schools killing thousands of young people who aspired to have careers. There were dangerous security situations, but despite these obstacles, Afghan women pushed forward, worked hard, gained their place in society and showed the strength of our women to the world.

Private schools and some educational centres were built for girls, and eventually, universities and educational literacy classes were implemented to educate older women.

Ministries included women, and women worked in almost every sector. We worked to forge a path for women even to own their businesses.

It was not easy to fight against a society that had been at war for decades, an often dark-minded society, but we fought nonetheless.

Since last August, our efforts across these generations have now been lost with the newest arrival of the Taliban government. And with it, my mother’s stories and memories are repeated – schools are closed to girls, and women can’t work.

Some events that happen in life are irreparable, and no great achievement can compensate for the progress that is lost. The fall of Kabul meant the fall of women in Afghanistan and the fall of millions of dreams.

For years, we fought against bigotry, terrorism, and the rise of physical and mental torture to attain our most basic rights.