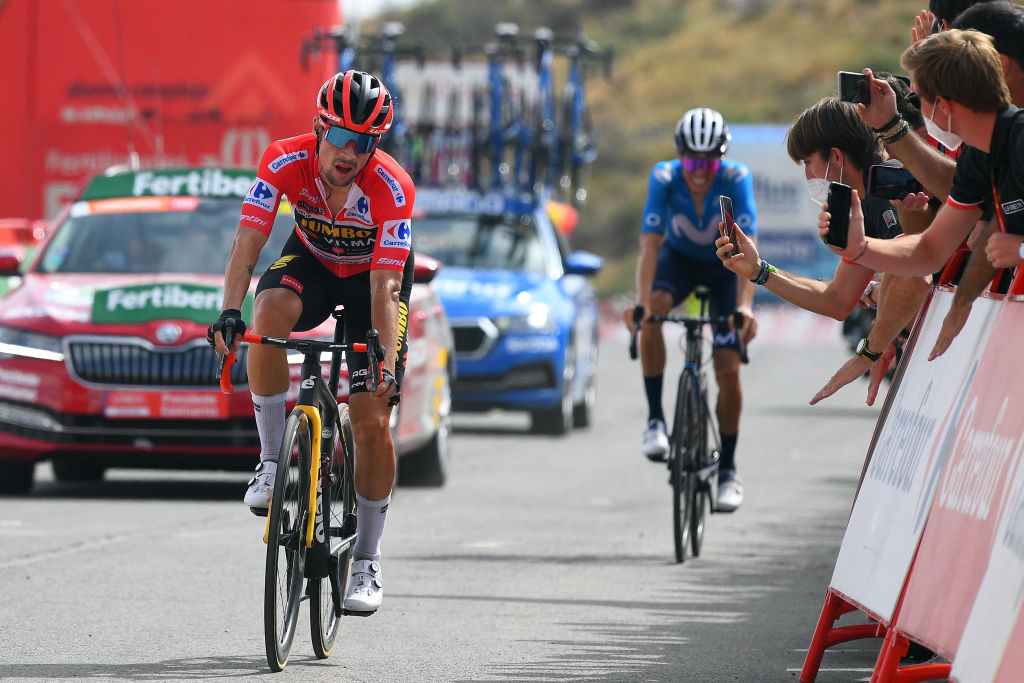 In an impressive climbing display on the final ascent of the Velefique, Roglič chased down one strong attack by Ineos Grenadiers’ Adam Yates then after some brief skirmishing by the other GC favourites, the defending champion pounced on another move by Enric Mas (Movistar) and go clear.

At the finish, furious speculation from Spanish TV commentators that Mas could drop Roglič proved to be incorrect. Instead, the race leader easily came around his rival to take second place, the bigger time bonus and distance him by a second.

As for the gaps on the rest of the field, suffice to say that after stage 8 on Saturday, 13 riders were at less than two minutes on Roglič on GC. Now there are only four.

Mas remains the most dangerous of the contenders at 25 seconds but other key rivals like Egan Bernal (Ineos Grenadiers) conceded a minute and is now at 1:52.

These are not seemingly definitive time differences on the scale of a certain other Slovenian’s overall lead in the Tour de France after nine days racing. But after the Vuelta’s hardest mountain stage to date, they form a solid confirmation of Roglič’s domination, nonetheless.

Asked if he was much closer to overall victory, Roglič gave a cautious answer.

“It’s definitely closer than at the start, there are nine stages behind us now. But it’s still super far to the finish and we have to stay in one piece. It’s a super hard third week, and that’s where the decisions will be made in this year’s Vuelta.”

Roglič said he had not been at all surprised by Mas challenge, as the Spanish climber turned in his best performance, by his own admission, since finishing on the Vuelta podium back in 2019.

However, that was also very true of Roglič himself on what he recognised was “quite a hard day, it was super-hot.

“When we came to the bottom of the last climb and I looked up and saw how far there was to go to the top, I could see it was quite far and immediately the pace was super-hard.”

“But finally, it was an easy situation: I just had to give everything I could do, and it was enough to keep the jersey.”

Roglič once again deemed it possible, though, that given there are two weeks of racing left to go, he might ‘lend’ it to another rival not considered a major long-term threat to victory.

“The main goal is to have it at the end of the race, and that would be perfect,” he argued. “Every day there are different situations though, and I need to do the best I can and see what the coming stages will bring us.”

Rather than his rivals, though, at this point in the game it already looks as if Roglič’s leadership options depend very much on himself and his own condition in the next fortnight. But he brushed aside a question regarding whether he felt as good or better than in 2020 or 2019 in the Vuelta at this point in the race.

“I don’t remember,” he argued. “I just know that the last two Vueltas I finished them well.” And in his third, there are no signs up to now that 2021 will end any differently.

Meghan Markle Gives Her Coat to Mom at Invictus Games

Celebrities At Nightclub In Hollywood