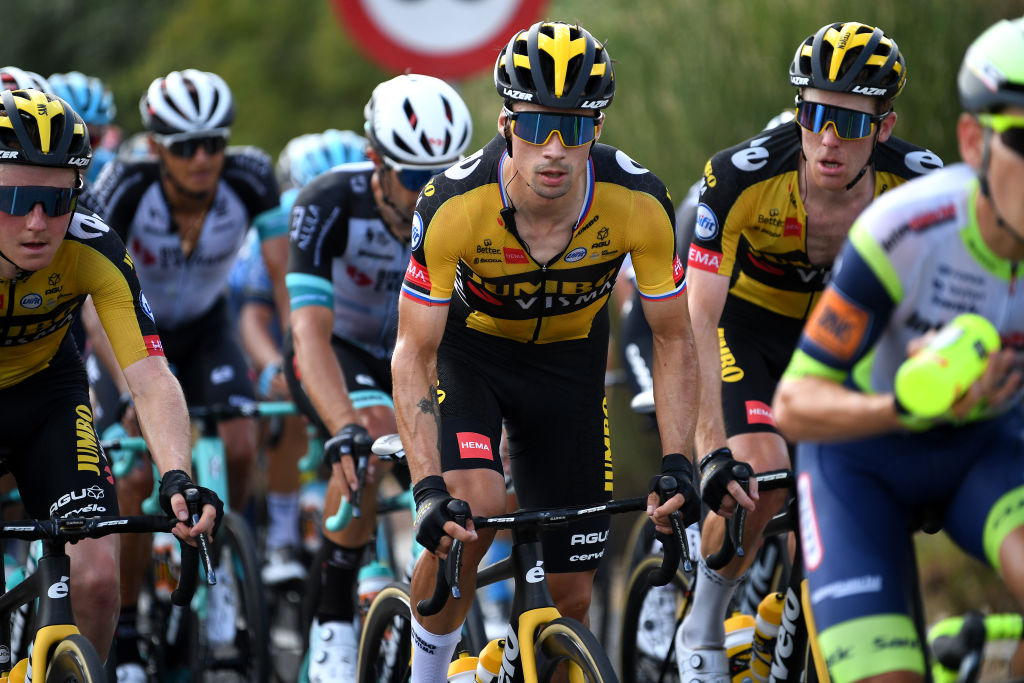 As he waits for the start of the third and definitive week of the Vuelta a España, leading favourite Primož Roglič (Jumbo-Visma) describes himself, as could only really be expected, as very pleased with his performance in the race so far.

But what’s rather more eye-catching is that Roglič also reveals he’s been taken aback by his Vuelta performances, too, not only in 2021 but also when he won the Vuelta in 2020.

“More than feeling positive, I’m surprised, actually, with the way it’s going,” Roglič points out to Cyclingnews during the second rest day.

He agrees with a laugh that he’s done quite well in the Vuelta recently so maybe it’s not such a shock in one way.

“Yes, that’s true. But in ’19 I planned I’d come here. But now two times, I just come to the Vuelta, I’m not really planning it [in advance]. So there’s always a little uncertainty as to how you will go or how it will really be.”

In 2020 and and 2021, Roglič came to the Vuelta after a disappointing and/or very difficult Tour de France, losing in July last year to Tadej Pogačar (UAE Team Emirates) at the last minute on the final TT and this year crashing out. That was in stark contrast to 2019, where the Vuelta had been pre-planned from the get-go, combined with the Giro d’Italia, where he placed third.

Surprised or not, Roglič’s 2021 Vuelta is very much on track. He remains the best-placed of the pre-race favourites by 35 seconds on Movistar’s Enric Mas (Movistar) and, unlike any other GC contender, has already won two stages as well as leading the race outright twice this year.

But it’s not only about Roglič, either. With teammate Sepp Kuss just three minutes behind Roglič, and currently ninth, the double champion points out that the American represents a realistic GC option for the Jumbo-Visma team.

Asked about Kuss’ possible chances in the Vuelta GC, Roglič said, “For sure, it’s important to keep him as close as possible. You still don’t know whatever will happen, eh?

“Maybe he wins at the end,” he adds, half-jokingly and with a laugh. “But hopefully we can ride good and strong together.”

Roglič’s comments may be good humoured, but his comments about the uncertainty of events in any race are surely serious. After all, they come after a 2021 Tour where he abandoned with injury and Dane Jonas Vingegaard stepped up and finished second overall.

On top of that Kuss’ best placing in Grand Tours are certainly better than Vingegaard prior to this year’s Tour.

While Vingegaard’s previous best was 46th in the Vuelta, the more experienced Grand Tour racer Kuss has taken 15th in the 2020 Tour, and he has won stages in both the Vuelta and Tour in the past. His time trialling has proved to be something of an Achilles heel in the past, but he did place 12th in the opening Burgos TT this year.

As for his evaluation of the second week, Roglič agreed that overall it has gone very well. Although the two crashes he experienced could have been setbacks, neither has produced any lasting damage. On top of that, he has won another stage, and gained time on all his rivals, most notably Egan Bernal (Ineos Grenadiers).

“Crashes are never ideal, but they could have been worse, and I’m still going well. So I’m super happy about it, a nice week for all of us.”

On top of that, Jumbo-Visma are hitting full strength collectively, he says, just as the race is going into the critical third week.

“In the first mountain stage, some people said we were not as strong because some guys were dropped. But it looks like we are getting there. It’s definitely super nice to have great support around me.”

Others in the GC hunt

There are various surprises in the GC in general, starting with the leader Odd Christian Eiking (Intermarché-Wanty-Gobert Matériaux). The Norwegian’s grip on the overall was not thought to be strong given he gained the lead after infiltrating a 31-rider break rather than making a full-blown GC effort. But since then, Eiking has fended off a rider with much more serious GC credentials, Guillaume Martin (Cofidis) and remains on top of the overall after two tough mountain stages this weekend.

“The thing is, they’ve showed some really good efforts,” says Roglič in recognition of the performances by the two riders ahead of him on GC. “Specially on Sunday, Eiking’s whole team was super good and he definitely deserves to still have the jersey.

“Now, as the days go on, we will see what the outcome will be. But to be in the positions we are in now, everybody has to do some good rides and everyone deserves it.”

Another name who does not get as much media coverage as Roglič, Egan Bernal (Ineos Grenadiers) and the other big-name challengers in the GC battle is Jack Haig (Bahrain Victorious).

Currently sandwiched between Colombians Miguel Ángel López (Movistar) and Bernal on GC, Haig has never done so well overall before. But his track record in the mountains is a very solid one, and after his bad Tour crash he has stepped up to substitute Mikel Landa as Bahrain’s challenger with a vengeance.

Asked specifically about Haig, Roglič said “everybody can be a challenge, eh? The way he’s riding means it’s no by coincidence he’s in the place where he is. Still, let’s say the final is starting now and every day we will have more news about how well people are really going.”

In a good place

As for himself, Roglič certainly seems to be generally speaking in a good place and not just in terms of the racing, talking more freely in press conferences and giving plenty of waves and grins from the winner’s podium.

He agrees that although he is fully in the fight once more, if he was more relaxed in the Vuelta 2020 than he was in 2019, now he’s feeling even more at ease than 10 months ago when he was last battling for red in Spain.

“For sure. I just try to really enjoy it. So far it’s going perfect for me and I’m pleased, too.”

Not everything about 2020 in the Vuelta was that good. For one thing his memories of the fast-approaching Asturian climbs, where he suffered but did not crack on the ultra-difficult Angliru, are that they are “hard,” he says with a laugh.

“The Angiru was a really hard day, and it was super good that I managed to get to the top. Coming down I could see how hard it really was. But they’re great, beautiful, steep climbs and definitely a show for racing.”

Then apart from the Liège-Bastogne-Liègesque stage 20, the other eye-catching stage of the third week is of course the final time trial. But while Roglič’s most recent track record makes him a huge favourite for that stage, past history, including his own, invites for a certain degree of caution.

“Exactly, you never know what can happen,” he says.  “You can have a good day or a bad day.

“I believe in thinking positive though and I will do my best. But I’m not afraid of it. I can do good time trials and I’m really looking forward to it.”

Whether he’ll be surprised at whatever his own performance turns out to be that day, though, we’ll only find out in six days’ time.

Will There Be a Girls Trip Sequel?

Zendaya and Timothée Chalamet Team Up For Dune Press