Roglic: It doesn’t matter which of us wins the Tour de France 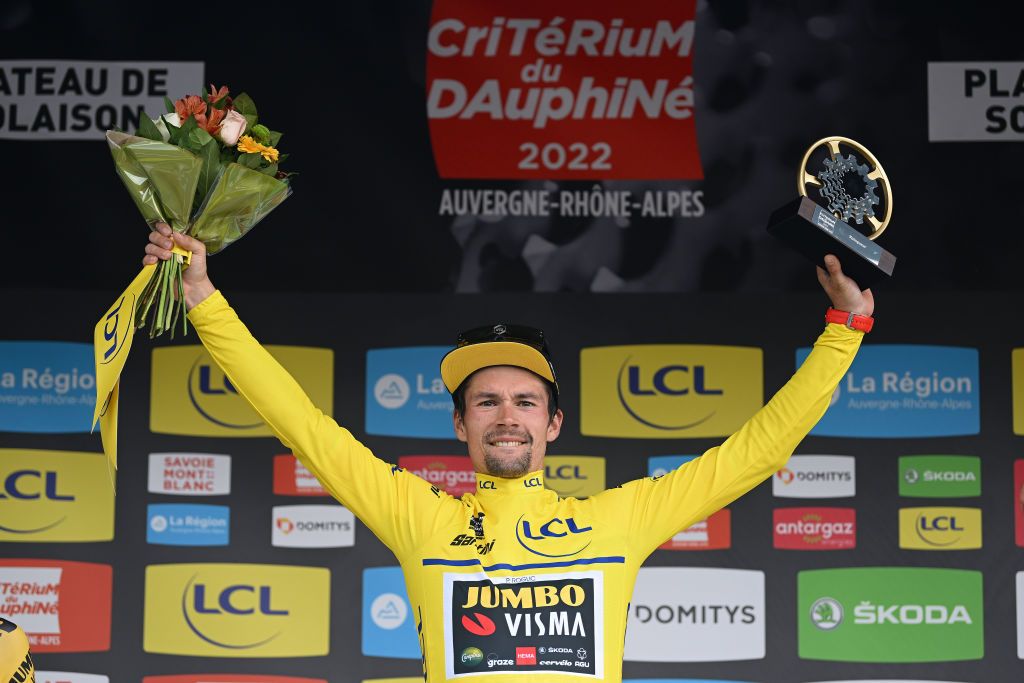 Primož Roglič winning a week-long stage race is nothing new. In fact, doing so in a team one-two with Jonas Vingegaard is nothing new either, after last year’s Itzulia. But whereas last year there was a clear division between the two, Roglič now has company at the top of the Jumbo-Visma pecking order.

Despite the uncertainty surrounding Roglič’s condition following his knee injury last month, the main takeaway from the  Critérium du Dauphiné isn’t that the Slovenian is well on track for the Tour – that much should have been expected anyway. It’s that he is not the only rider on his team operating at the level required to win the yellow jersey next month.

The spoils were divided up neatly atop the Plateau de Solaison on Sunday: overall victory for Roglič, stage victory for Vingegaard, Tour de France favourite status for both. But there can be only one winner in July.

“Everyone, huh,” Roglič replied in characteristically laconic fashion. “Everyone can say something, everyone can speak. It’s like that.”

Asked to narrow it down to ‘who’s the boss on the bike’, Roglič would not be budged.

“The same. Everyone has their own part. Like today, the guys were incredible. Really big thanks to all of them.”

Roglič has risen to the top of the sport in the colours of Jumbo-Visma and carried the torch as they developed into one of the leading stage racing teams in recent years. He has won the Vuelta a España three times for the team and came agonisingly close to landing the Tour de France in 2020, but he insists it doesn’t have to be him who finishes the job in July.

“Definitely at the end I don’t care who is winning or taking it. It’s a team sport. We try to do the best with what we have.”

Roglič heaped praise on his teammates throughout the press conference. After some riders expressed doubts over Jumbo-Visma’s strength earlier in the week, Sunday was an emphatic response.

Christophe Laporte and Chris Harper did the early work, Tiesj Benoot and Wout van Aert chipped in over the Col de la Colombière, and Steven Kruijswijk laid such strong foundations on the final climb that when he pulled off, Roglič and Vingegaard only had one rival for company.

“Super strong team,” Roglič said. “We had everything under control, not just today but the whole week. I’m pleased to be a part of it and we can achieve all these successes.”

As well as placing one-two on the stage and the overall, Jumbo-Visma finished the week with two extra stage wins for Wout van Aert, who took home the green jersey. Perhaps unsurprisingly, they also topped the teams classification.

“I guess we deserve it,” Roglič said. “We showed really nice racing this week. We can be confident going into the Tour. But for sure it’s a different story there. It has to be the same as here – doing the best each and every one.

“We are on the right way. We did a good job, but we can’t be satisfied because there’s still quite some time to go. We try to keep the level or be even better for the Tour.”

As for Vingegaard, and the decision to grant him the stage win: “He super deserves it. He was super strong on the last climb. Each guy of the team did an incredible job. It’s a win for all of us.”

Even questions that weren’t about his team were brought back around to the strength of the team. Does this send a message to Tadej Pogačar (UAE Team Emirates)? “We’re just enjoying our work.”

There was, however, time for some of the humour that has increasingly slipped into Roglič’s dealings with the media.

He spoke of doing some “small corrections in France this year” referring to his titles here and at Paris-Nice after losing the yellow jersey in both races – and of course at the Tour – in recent years. He also joked that the Tour is ideal preparation for the Vuelta.

Whatever happens next month, Roglič has further bolstered his palmarès which now features a who’s who of week-long stage races: Critérium du Dauphiné, Paris-Nice, Tirreno-Adriatico, Itzulia, the Tour de Romandie.

Yoga for Bodybuilders: Here’s Why Weightlifters Need It