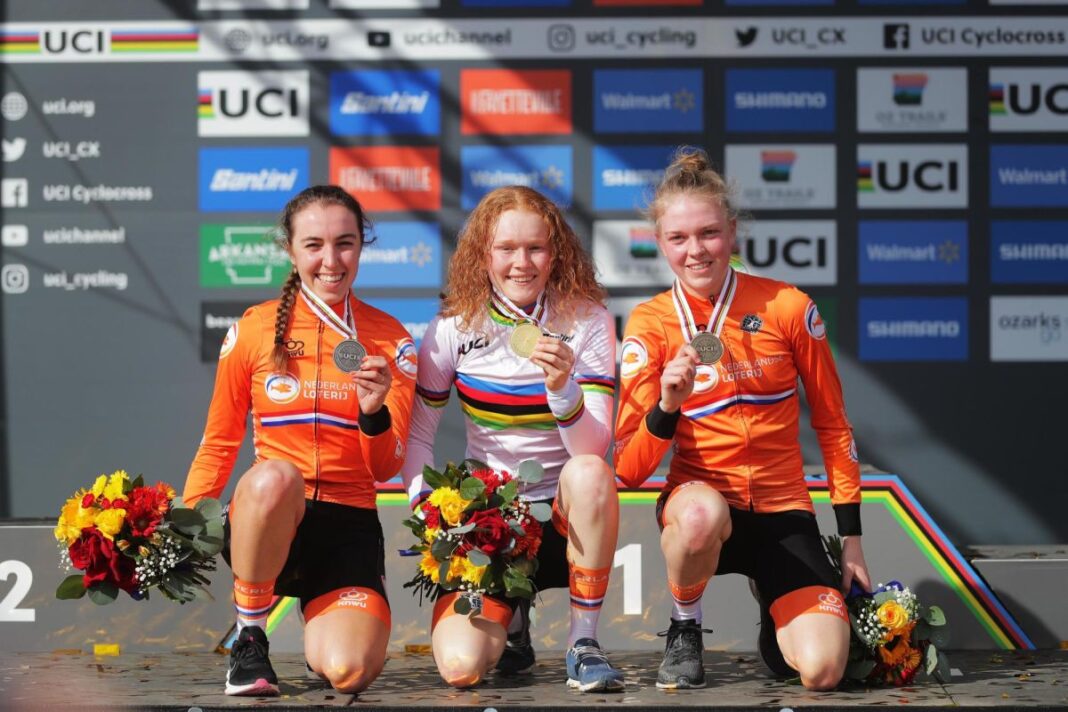 The 2022-2023 cyclo-cross season unfurled with a two-race UCI World Cup swing in the United States this month and the stampede for points began with an unexpected haul by 20-year-old Fem van Empel (Pauwels Sauzen-Bingoal) on the elite women’s side. Her teammate Eli Iserbyt began where he left off as last year’s World Cup elite men’s overall winner by sweeping the pair of US races in Waterloo, Wisconsin and Fayetteville, Arkansas.

Van Empel scored back-to-back victories in the opening rounds for elite women by outsprinting former World Champions, first Ceylin del Carmen Alvarado (Alpecin-Deceuninck) at Waterloo and then Lucinda Brand (Baloise Trek Lions) at Fayetteville. The World Cup leaderboard is top heavy with six Dutch women dominating the standings, and this is without World Champion Marianne Vos (Jumbo-Visma), who has not started her ‘cross campaign. Brand is currently second overall, Alvarado third, while the next three spots are taken by Annemarie Worst (777), Denise Betsema (Pauwels Sauzen-Bingoal) and Inge van der Heijden (777).

Next on the 14-race circuit is another hefty travel transition for most of the peloton for World Cup Tabor in Czech Republic. The weather forecast will have moderate temperatures, 17 degrees Celsius on Sunday, and there is a chance of showers the day before to bring a little mud that most of the European riders had missed in the US.

A week after is World Cup Maasmechelen in Belgium and then a break for Continental Championships, the Pan American round on November 4 in Falmouth, Massachusetts and the European rounds November 5-6  in Namur, Belgium.

The top veterans should reign supreme again this season, Brand, Vos and a healthy Alvarado for the women and Wout van Aert (Jumbo-Visma), Mathieu van der Poel (Alpecin-Deceuninck) and Tom Pidcock (Ineos Grenadiers) for the men. As the tracks dig deeper in the season, here are some of the not-so-usual suspects to watch across off-cambers, climbs and perhaps more sprint finishes.

The young Dutch rider, a national champion already in ‘cross and mountain biking, has soared to the top of the elite women’s field. She’s quickly gaining technical skills, and confidence, at the front of the peloton. She won the under-23 cyclo-cross world title two seasons ago, and finished with the bronze at the Fayetteville Worlds this past winter.

Her return trip to the Ozark mountains gave her something new to celebrate, “Winning in the [World Cup] leader’s jersey is so cool. This victory is a reward for all the hard work.” Van Empel will move over to Jumbo-Visma in January 2023 and align with reigning ‘cross World Champion Vos, so look out for a mighty one-two punch after the Christmas frenzy of racing.

Another young Dutch powerhouse, Pieterse (Alpecin-Deceuninck) returns to World Cup action in Tabor this Sunday. She has only competed in a single ‘cross competition so far, but the 20-year-old won the women’s elite C2 race at GP Oisterwijk. Look for her to pounce on the podium straightaway, as her only victory out of 20 starts last season was the U23 World title in Fayetteville. Pieterse was always in the mix with six World Cup podiums, half of those as runner-up, so she is motivated to make a statement.

For the first time in her career, the 2017 U23 women’s world champion jump-started her season in the US. Now 26, the Dutch rider won a succession of four C1 and C2 races in the US, Rochester Cyclocross and Charm City Cross, leading up to the World Cups. While Worst was a disappointing fifth in Waterloo, she worked her way onto the podium to third place in Fayetteville. She said she preferred the slippery and more technical conditions that were present in Rochester and Baltimore, but is on form to return as an elite contender at Worlds after opting not to travel to the US in 2022. The two years prior she finished as the runner-up in elite women’s race.

Looking beyond the long list of riders from the Netherlands who can dominate cyclo-cross, Hélene Clauzel (AS Bike Racing) of France is right there. She has proven she is strong at the starts of all the US races this year but has yet to match accelerations from Brand and Van Empel on late laps to get on the podium. However, she has a pair of top 10 finishes in the World Cups, along with four podiums in C1 and C2 races.

A new team and a fresh start for Laurens Sweeck sees him in second place in the World Cup standings to begin the year. He moved from the Pauwels Sauzen-Bingoal team to IKO-Crelan this year and has a chance to make a name for himself, separate from Iserbyt. The 2020 Belgian national champion is explosive and will be in contention each week, especially before the trio of Van Aert, Van der Poel and Pidcock begin their ‘cross campaigns.

Lars van der Haar has moved into the leadership role at Baloise Trek Lions, as Toon Aerts has separated from the team following a positive result from a banned substance in January 2022, which remains unresolved. What is resolved is a solid performance of Van der Haar to begin this season, five races in the books with four podiums and a victory at the C1 Trek CX Cup. After a third place at Waterloo, Van der Haar skipped round two of the World Cup and travelled home to be with family, but he’s back on the start list for Tabor.

Way back in 2015-2016 he won the World Cup title and was second at Worlds behind Van Aert. Last year he repeated in the silver position at Worlds, this time behind Pidcock. He’s in top condition for top results this season.

The Colorado native is the reigning US elite men’s national champion as well as the Pan Am champ but did not have the best outing at Waterloo with 11th place, and fellow American Curtis White (Steve  Tilford Foundation) ahead of  him in. But at Fayetteville Brunner put on a show. He validated his physical and mental prowess with a fourth-place finish, one of the best performances by a US male in many years, not only matching the pace of all the Belgians but successfully attacking near the end and almost catching the three leaders.

There are no US riders going to Tabor this week, and most will delay the start of the European campaign until after US nationals in Hartford, Connecticut in mid-December, including Brunner. Look for him to battle against White on the North American calendar and mix it up for the ‘cross cluster of races between Christmas and New Year’s Day.

This 19-year-old admitted that he has several years remaining to win the U23 world title, but he’s making a name in the elite races in a big way. He is fourth in the World Cup standings after two rounds, based on a pair of fifth-place finishes. In fact, the fifth place at Waterloo was his best placing of his young career in a World Cup, and he matching that again a week later in Fayetteville. He will line up in the U23 race at Tabor this weekend but look for him to get on the elite podium sooner than later.

Share
Facebook
Twitter
Pinterest
WhatsApp
Linkedin
Email
Print
Tumblr
Telegram
Viber
Previous articleCheap vs expensive bike trainer: What you get for your money at each level
Next articleThe Zwift Hub is about to transform the smart trainer market