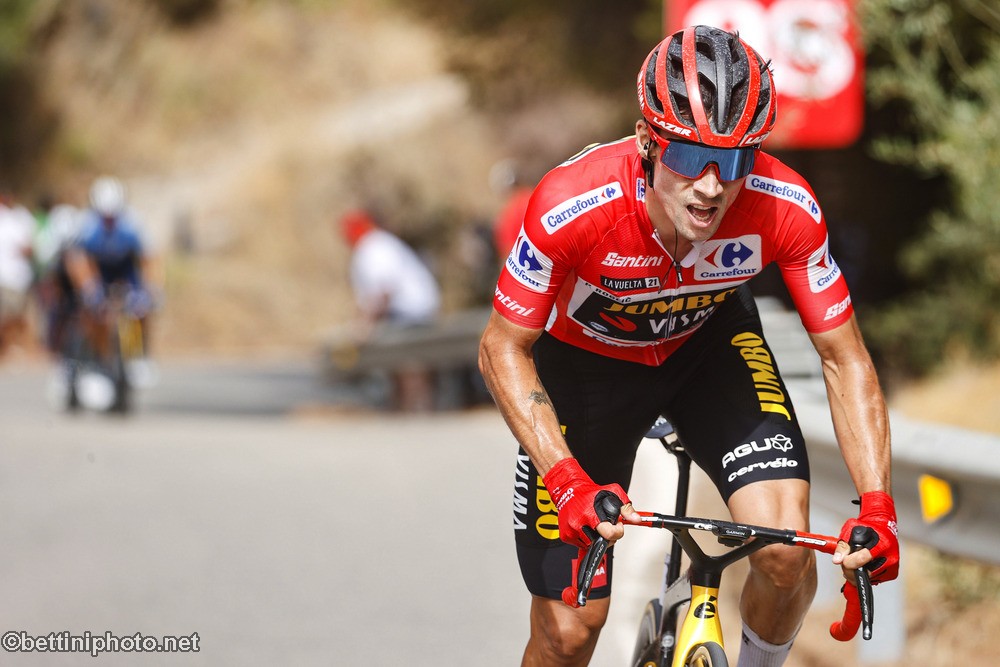 It wasn’t supposed to happen like this. On a theoretically quiet stage 10 for the Vuelta a España GC favourites, Primož Roglič (Jumbo-Visma) pulled off a stunning late climbing attack that netted him a gain of nearly 40 seconds on key rivals Egan Bernal and Adam Yates (Ineos Grenadiers).

There was a moment of stunned silence among race followers at the finish as 20 kilometres out, Roglič’s bright red jersey of race leader suddenly ripped out of the pack on the second-category Puerto de Almachar.

Roglič’s surging ambush left his rivals struggling to re-organise. It hardly needs pointing out that his time gain could have been even greater on all of the opposition not just the Ineos Grenadiers duo had he not crashed, at speed, but fortunately with only minor injuries on a dust-covered downhill corner.

But even though his group had swelled to seven riders by the time the little chase group reached Rincon de la Victoria, no one could fail to recognise that the double Vuelta champion had both underlined his climbing superiority and pushed two top names a little further down the ranking in the process.

More than his words, Roglič’s mood and behaviour spoke volumes at the finish. He joked with journalists, smiled and clapped arms round his teammates’ shoulders as he received congratulations and seemed to be in no dramatic hurry to get his injuries sorted out. Any issues with the day’s clammy heat was resolved by a full bottle of water being helpfully emptied over his head by a team soigneur, too.

“It would be even better without the crash, eh?” he said when asked by a small group of reporters, including Cyclingnews, what was behind his strategy of making a move on a transition stage. “It’s not too bad, there was some action.”

He brushed aside the crash itself saying, “it’s fine, it’s racing, if there’s no risk – you don’t win, eh? I was just going too fast, it was super slippery, and I went a little too fast. But it’s not too bad. I mostly slid.”

While the long-term effects of the crash, if any, remain to be seen, it is certain Roglič has now eased the pressure and his team considerably on himself in any case. That’s thanks to ceding the lead a second time in the race to an Intermarché-Wanty-Gobert Matériaux rider, in this case Odd Christian Eiking.

But in any case, his latest display of climbing power will have further demoralised his rivals for sure, as well as creating an additional time cushion on Yates and Bernal. After all, if dropping the opposition so easily is within Roglič’s capabilities on the transition stages, what could happen when the Vuelta returns to the high mountains in four days time?

Gut Health and Longevity Are Connected—Here’s How