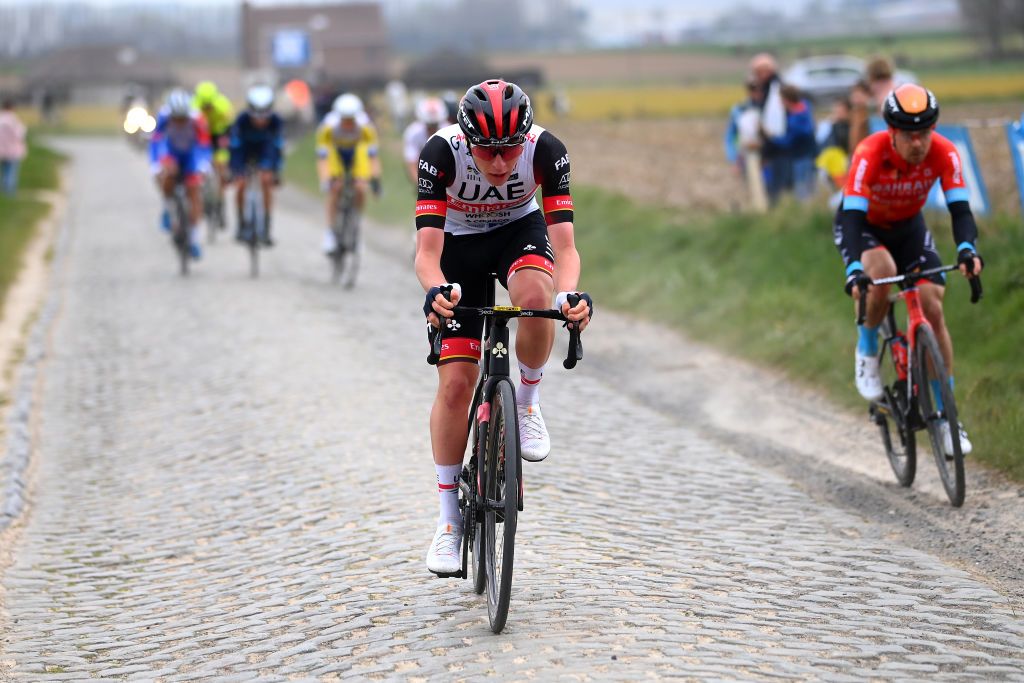 As Tadej Pogačar faces the cobbles of a Paris-Roubaix-style stage on one of the crunch days of the Tour de France, UAE Team Emirates management are confident that the double defending champion knows what to do.

Even without the “important” loss of Italian Matteo Trentin, they insist he will have all the backing he needs this Wednesday.

A hugely experienced one-day racer who has ridden Paris-Roubaix nine times and the Tour of Flanders 10 times, Trentin could not start this year’s Tour de France after going down with COVID-19.

Team Principal Mauro Gianetti says that he hopes a combined effort by other team members should be able to fill the gap.

On top of that, Gianetti told Cyclingnews that Pogačar had done his own preparation for Wednesday’s 19 kilometres of pavé as fully as possible.

“He’s done the recon, he’s done the Tour of Flanders and been over the pavé so he knows what he has to do, he knows how to handle pavé.

“But you don’t race alone, you race as a team, and that’ll be his main motivation today.”

Gianetti said in the enforced absence of Trentin, the team had revised their support structure, under the guiding principle of ‘regroup and move on’.

“We were going to bring Matteo Trentin for the role of protecting Tadej, unfortunately, he couldn’t be here and for this first week it’s an important loss.

“But we do have Marc Hirschi now, who can also do stuff in the mountains that perhaps Trentin could not have done. And between Brandon McNulty, Mikkel Bjerg, Marc Soler and [Vegard Stake] Laengen, they’ll have to do a little of what they would have done under the circumstances anyway, and a little in the line of Trentin.”

Gianetti recognised that the weather, set to be dry and sunny for Wednesday, meant the pavé stage was very different in some ways to what the riders faced in April. Many recent editions of Paris-Roubaix have been held in dry weather but road surfaces and the surrounding fields could be wetter and muddier.

“Dry pavé is very different and above all the conditions are a lot dustier. But the critical thing is to be ahead anyway, and to know what the course ahead of you is like – the curves, the roads and so on,” Gianetti said.

“The only question is that 180 other riders also want to be ahead, so you have to choose your moments correctly, and staying concentrated is fundamental.”

“That’s always the way in the Tour, you can’t underestimate any stage, you never know which stage is key. And it could be this one.”

As a former pro, Gianetti himself recalls how tough Paris-Roubaix style stages in the Tour de France can be, having had to ride one with a very painful injury. Albeit in a very different context, even back then he knew the importance of keeping such a stage within the perspective of the bigger, long-term goals.

“I didn’t race Paris-Roubaix, but in 1989 in the Tour, my manager Paul Koechli made me do one [a cobbled stage]. But I’d broken my nose in a crash the day before and on the last two sectors of pavé the pain was so great I almost walked.

“I made it, because Koechli told me, ‘if you get through this stage, you’ll get through it all the way to Paris’. And I did – with a broken nose.”

Welcome to the team, James Newbury 👊