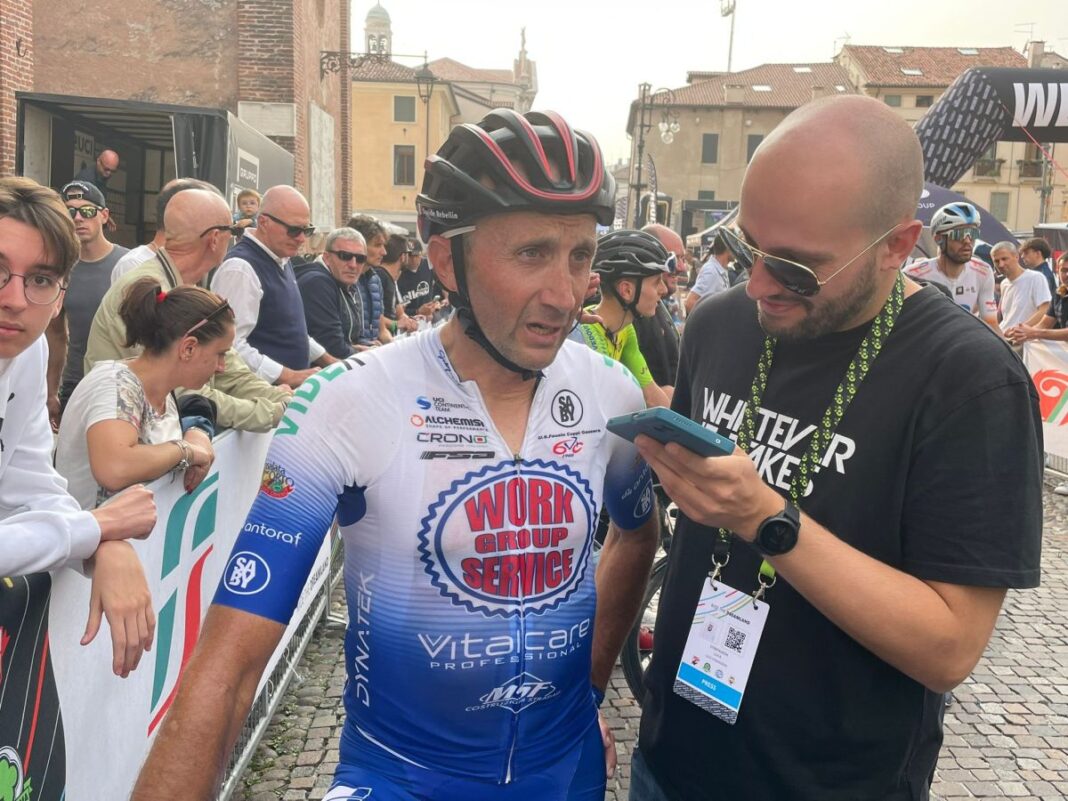 Six weeks ago, on the evening before his final professional race and in the middle of a long conversation that took in the peaks and valleys of his three decades in the peloton, the late Davide Rebellin was at pains to emphasise one thing: the Veneto Classic marked the end of a chapter, but the story of his life on two wheels was not complete.

“I go out on the bike because I’m following my passion. Sunday’s my last race, but Monday or Tuesday, I’ll already be back on the bike,” Rebellin said softly. “For me, it’s really a way of feeling good in myself. It’s my way of life. And I know it will be like that afterwards, too. I always said that I’d keep doing races for as long as I felt good. It’s going to be different now, but I’ll still be going out on the bike. It’s my way of feeling good.”

Rebellin was true to his word. Last Sunday, in his adopted home of Monte Carlo, the 51-year-old was among the participants in the Beking Monaco Criterium, an exhibition event organised by Matteo Trentin. By midweek, Rebellin was back in his native Veneto. Inevitably, he was in the saddle.

Even back in his darkest days, when he was stripped of his Olympic medal and banned from competition, when his first marriage was falling apart, and when his tax affairs were being scrutinised across national newspapers, the bicycle remained a source of light for Rebellin. At times, it might even have served as a lifeboat.

“Maybe I felt sickened by the milieu of cycling, but I was never sickened by the idea of riding my bike. I always loved that,” Rebellin said in that long phone call in October. “As long as I can pedal, I’ll keep doing it, and always with pleasure.”

For Rebellin, even in retirement, a gloomy day in early winter was always likely to be adorned with a bike ride. On Wednesday morning, he set out for a spin that took him towards Montebello Vicentino. He never came back. He was killed instantly shortly before midday when he was struck by a truck whose driver reportedly failed to stop at the scene.

That Rebellin died doing what he loved best is no consolation at all for those who loved him. Italy, the nexus of the bicycle industry, has become an increasingly dangerous place to ride a bike. Rebellin’s tragic death echoes that of Michele Scarponi in 2017 and those of so many other cyclists up and down the peninsula in recent years. The routine act of cycling on public roads has become fraught with unacceptable risk.

Rebellin was born in San Bonifacio, just east of Verona, in 1971. For about as far back as he could remember, he wanted to be a bike rider. The only other career to which he briefly aspired in his youth was the priesthood, but as the years went by, Sunday became synonymous with races rather than rosaries.

He started racing as a juvenile in the early 1980s with the Pizzini di Malcesine team, where his uncle was among the coaches. By the turn of the decade, he was among the most vaunted amateurs in Europe, winning the Giro delle Regioni in 1991 and taking silver in the World Championships in Stuttgart later that year.

The following summer, Rebellin helped the late Fabio Casartelli win the road race at the Barcelona Olympics before turning professional immediately afterwards as part of a golden generation of Italian talent that included Marco Pantani, Francesco Casagrande and Michele Bartoli.

His first team was MG-GB, where, despite some eye-catching early displays, he struggled to integrate. In hindsight, the tough love approach of Giancarlo Ferretti – the so-called ‘Iron Sergeant’ – was hardly suited to Rebellin’s quiet sensibility. “Compared to the others, I had some difficulties getting results,” Rebellin says. “Maybe it was a bit because of my character: I was very timid and shy, and I struggled to find the right feeling with the team.”

The turning point came when Rebellin moved to Polti in 1996, where he won a stage of the Giro d’Italia at Monte Sirino and wore the maglia rosa for five days en route to sixth overall. That result triggered hopes that he might become a Grand Tour contender, but after a largely trying season at Marc Madiot’s nascent La Française des Jeux team, Rebellin returned to Italy, first with Polti and then with Liquigas, where he now focused fully on Classics and short stage races.

In his late 20s and early 30s, Rebellin won the Clásica San Sebastián (1997), Züri-Metzgete (1997) and Tirreno-Adriatico (2001), before achieving his finest hour after his transfer to German squad Gerolsteiner. In 2004, he won the Amstel Gold Race, Flèche Wallonne, and Liège-Bastogne-Liège, earning himself the moniker of ‘Trebellin,’ but the acclaim was not universal in his home country, where this essentially shy and awkward man had always been overshadowed by more charismatic contemporaries like Pantani.

After being omitted from the Italian team for the Athens Olympics, Rebellin took the controversial step of seeking Argentinian citizenship to participate in that year’s World Championships on home roads in Verona, but the move was blocked on the eve of the race.

No matter, Rebellin persisted, steadfastly amassing results until he could be ignored no more. By 2008, he had won Paris-Nice and another Flèche Wallonne, earning himself a spot on the Italian squad for the Olympic Games. In Beijing, he took silver in the road race behind Samuel Sánchez at the age of 37. It should have been the zenith of Rebellin’s career but instead it proved to be the nadir.

Days after he won Flèche for the third time in April 2009, it was announced that Rebellin’s had tested positive for the blood-boosting drug CERA following reanalysis of his sample from Beijing, as had his Gerolsteiner teammate Stefan Schumacher. Rebellin denied all wrongdoing, even after he was handed a two-year ban and became the first Italian athlete in history to be stripped of an Olympic medal for doping.

Although he later avoided a criminal prosecution for doping in Italy, the sporting verdict remained, and Rebellin had to mail his medal back to the IOC to be reassigned to Fabian Cancellara. “I was incredulous. For a long time, I couldn’t believe this was happening,” Rebellin said in October. “Even if I don’t have it physically, I feel like it’s still mine.”

Rebellin must have felt like his life was unravelling in the months that followed. His wife and agent Selina Martinello served as his spokesperson when the scandal erupted, but the couple would divorce before Rebellin’s ban had run its course. Meanwhile, the Italian tax authorities were closely scrutinising the legitimacy of his residency in Monaco.

The ban and its fall-out broke Rebellin’s career as a top-level cyclist, but he later wondered if it hadn’t been the making of him as a man. Although the doors of WorldTour teams would remain closed to him for the remainder of his career, Rebellin picked up the pieces of his life and remade it. He was later cleared of tax evasion, and he married his second wife Fanfan in 2014. “I was no longer fixated only on the bike, it opened me up more to life in general,” he said. “We could say this even strengthened me as a man.”

When he returned to racing with Miche in 2011, Rebellin immediately won the Tre Valli Varesine, but the WorldTour remained out of reach. He would make it as far Pro Continental level with CCC in 2013, but even then, it was whispered that the Polish team’s Giro invitation was awarded on the condition that Rebellin was left at home.

And yet Rebellin kept on going, racing past his 40th birthday and eventually beyond his 50th. Each change of team brought him further away from Broadway but his enthusiasm for racing a bike remained somehow undimmed. After CCC, he rode for Kuwait-Cartucho team, then Meridiana-Kamen, and finally with the Padova-based Work Service squad.

Instead of returning to the Giro or racing up the Mur de Huy again, he now found himself lining up in Iran and Indonesia for a minimal wage. Rebellin’s unspoken banishment contrasted with the welcome mats that were laid out for other convicted dopers of the era such as Ivan Basso and even Danilo Di Luca. The Italian didn’t help his own cause, of course, by never once confessing to wrongdoing, but as the years went by and his career kept on going, his public image softened considerably.

Too guilty to be a victim, yet too gentle to be a villain, Rebellin came to be viewed more with intrigue than with disdain. His remarkable longevity – he continued racing even after breaking his tibia and fibula aged 50 at the Memorial Marco Pantani – earned him respect, and his near vegan diet stoked curiosity. Even in his pomp, he had never inspired adulation, but in middle age, his innate politeness and his gentle way of carrying himself now won him quiet affection.

Even those who denounced his doping past could not help but be compelled by the mystery of his never-ending tour as a cyclist. Rebellin rode the UCI Gravel World Championships in an Italian jersey in October, and he had plans to keep competing in that discipline beyond the formal end of his road career.

“I think that he’ll continue riding a bike all his life,” the former L’Équipe writer Philippe Brunel once said. “Maybe it’s on the bike that he feels best. Maybe he feels better there than among men.”

Davide Rebellin was born in San Bonifacio, Italy on 9 August, 1971. He died in Montebello Vicentino, Italy on 30 November, 2022.