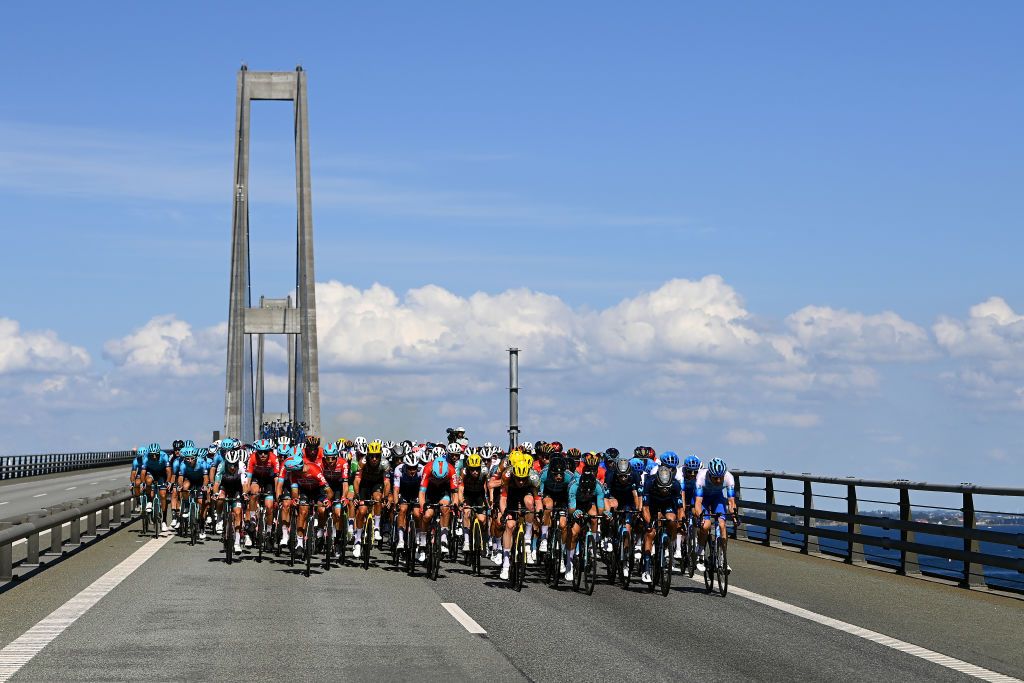 The corridor of noise was general all over Denmark. The Tour de France received a thunderous ovation from the crowds that gathered on the streets of Copenhagen, across Zealand and Funen, and all the way down to Sønderborg.

The Tour’s three-day excursion in Denmark for the Grand Départ was a momentous occasion, but while the suspense and tension were high, the race never fully ignited. A headwind on the Great Belt Bridge on stage 2, for instance, helped to keep splits in the peloton to a minimum. The most outrageous slings and arrows of misfortune came when a handful of GC riders, including Rigoberto Uran and Damiano Caruso, lost seconds in a crash on Sunday.

Yet there was drama all the same in Denmark, from Yves Lampaert’s win to Wout van Aert’s run of second places, from Fabio Jakobsen’s opening gambit to Dylan Groenewegen’s response.

As the Tour breaks for its first rest day after the long transfer to France, Philippa York looks back on the opening three stages.

I was pleased to see the return of a opening time trial at the Tour, as it’s a gentler introduction to the ambience of the race than having a road stage. That might seem an inappropriate description of the time trial effort, as by their very nature are brutal, but the mental and physical stress of the opening day’s 13.2km – way longer than what used to be the traditional five or six-minute prologue effort – is much easier to recover from than four hours of nervous tension.

If it was dry, then pacing would have been very important, but it was raining. And so, instead of one long effort with not much slowing down or braking, negotiating the hazards of urban Copenhagen became a test of agility and confidence, interspersed with straights where full power could be applied.

Filippo Ganna came to Tour with the main raison d’être of taking the yellow jersey for Ineos in Copenhagen, but he became less of favourite as each of the 23 bends gradually got wetter and wetter. And every time he hesitated on a bend, there was Mathieu van der Poel or Wout van Aert taking at least half a second from him. Plan A of having the exposure and, more importantly, of having the team car first in the race convoy for all of next week went out the window. Don’t doubt that the tactics for the cobbled stage really did begin way before they arrived in Denmark.

With the rain coming down for the GC contenders, it was case of balancing risk against potential gains. In that mix, there’s always someone who takes their brain out and convinces themselves it’ll be fine, refusing to panic and trusting their skill and equipment. That person was Yves Lampaert, who was as surprised as Patrick Lefevere will be when his contract negotiations open.

Twice Belgian TT champion, the boy can time trial, so what did he have to lose other than some skin if he did slide out? Nothing, really. Chapeau to him.

Instead of being a major celebration for the public, the weather dampened not only the route but also the atmosphere. Still, there was a large number of spectators, and the Danes are one of the happiest nations on Earth. But if it had been sunny, it would have delivered more.

You don’t need to know anything else about this first proper road stage other than it was always going to be known as the day of the Bridge. Although it wasn’t the same one from the Scandi-crime series, the Storebæltsforbindelsen was far more intimidating, as every pre-race briefing would have said the same thing and as they approached the day’s highlight, earpieces would be on repeat. Be. In. The. Front.

All the directeur sportifs were warning their charges of the sidewinds and splits and chiding them not to get caught out in the inevitable crash. Thankfully, ASO decided to take the left lane on the bridge due to avoid the potential of someone being thrown over the barrier and into the sea if a crash happened like the one in Strade Bianche where Julian Alaphilippe flew through the air.

With the wind blowing from the south-west and everyone pinned in the right gutter it was a real possibility, but instead there was a crash on the left that took out Rigoberto Uran. The cost was a prolonged chase, and with no help, because the commissaires pulled out the team cars once Uran and his teammates reached the race convoy behind the peloton.

The look Uran gave the lead commissaire’s Skoda was priceless, because normally when you fall, the ‘barrage’ doesn’t apply and it’s easier to chase back on. EF Education-EasyPost had had such a happy day up until then. The joy of Magnus Cort Nielsen taking the all the points for the polka dot jersey and celebrating as if he had won the stage reminded everyone that leading a Tour de France classification is a big deal.

I don’t know if it was related to the limited-edition Palace design jerseys but there’s definitely a thing to be said for the return of fluorescent colours in the bunch: easy to spot and happy customers.

With no proper sidewind action the only drama for the second episode was the inevitable crash heading into the final sprint, a combination of the headwind and all the pent-up nerves. QuickStep triumphed again, and as Mark Cavendish said, whichever sprinter raced for the Belgian squad was guaranteed a win. In true melodramatic style, Fabio Jakobsen’s past is a subplot that will run through the overall story.

If you sat through the whole of stage 3 from Vejle to Sonderborg and didn’t fall asleep, then I salute you. Without caffeine, I for one would have succumbed to a more useful pastime of forty winks than the snore-fest these 182km produced.

Really the only thing to think about was to wonder why Magnus Cort didn’t wait for his companions once he had gone over the first climb, because continuing with his solo break is going to catch up with him. In a couple of days, the price for enjoying the glory of being Denmark’s new hero will be a heavy one, but I doubt he cares – and he shouldn’t, either, because there’s more to life than just the result.

Dylan Groenewegen and BikeExchange will disagree, but other than another pile-up, the talking point and drama was provided once again by the moustached one from EF Education-EasyPost. All the talk of tension and stress must have related to catching the flight to Lille before the first rest day and that might explain why there was still a respectable average speed, but, oh boy, if ever there was a disappointing ending to a story that promised so much it was the last day in Denmark.

The public didn’t seem to care as it was another day of massive crowds through every agglomeration and on every hillside. I tried playing spot the favourites in the peloton for a while and gave up frustrated that unless they stopped for a comfort break, they were invisible. But with the new Jumbo-Visma kit looking like camouflage and three squads in dark blue it was always going to be a futile exercise. That the pseudo-spat between Peter Sagan and Van Aert couldn’t shake up the collective lethargy afterwards says it all.

Don’t Make Resolutions, Make Habits: How to Get Healthier in 2023