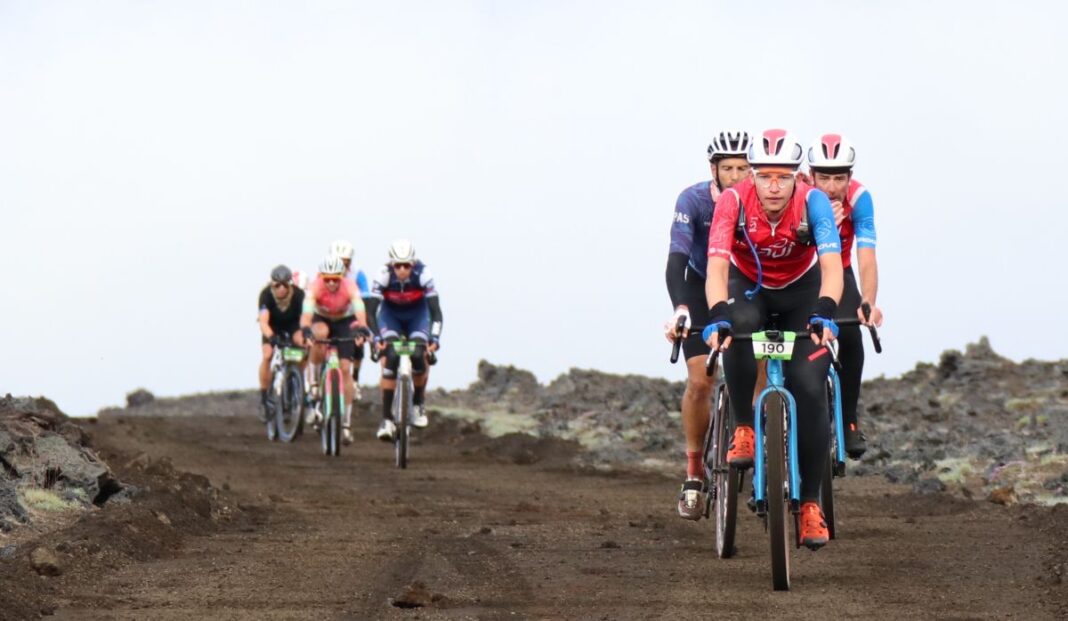 My alarm went off at 5.am, an hour usually reserved for darkness, but with the all-night sun in Iceland this time of year, the distant Volcano of Hekla – my challenge for the day – could already be seen through the windows of my cabin.

Dressed, and bike packed in the car, we set off for the 20-minute drive to the start of The Rift gravel race, to be ready for a bleary-eyed 6:30.am start.

When I arrived, I put my best mechanic skills to hand, double checking my pressure, my bolts and managing those last-minute tune-ups between sips of coffee. A quick roll to the start line and I was ready.

A few familiar faces greeted me, but at this point, with the open nature of gravel, you don’t really know who will be there, who you are racing against and what the tactics could be before the gun. The colours of Enough Cycling Team, The Cafe du Cyclist team and the Mazda Lauf team peppered the startline creating a pattern, one I couldn’t quite fit into. Right, there were some teams here. I took a pause, and made a plan, knowing it would be me, and other individuals racing against groups that were focused on a single outcome.

I’ve always felt the term ‘gravel Pioneers’ was truly apt for the first wave of gravel surfers. When you think of a pioneer you think of a dreamer, equipped with just their tools, navigation, dreams, optimism, bound to the wild, to find gold or reward in places others overlooked. Sure, gravel has been going for a while, but riders making a living full-time in gravel is a more recent thing. These pioneers have forged the paths and tracks towards which many of us have followed since. The gold rush is upon us, and it is a race to find the winning streaks.

Yet the change is afoot. There is absolutely room to call the top-tier riders in gravel professionals now. The trucks, campers, and support crews (in the USA), they’re seriously impressive.

This is all fine to me. In fact, it was always inevitable once the cycling industry cottoned onto the fact that a whole new genre of bike was becoming the latest must-have craze. It doesn’t change the experience of anybody racing gravel at their own speed, but it certainly has made the speed at the front get a lot faster. But what’s next? Is the next evolution in a more professional and more invested sport a turn to teams? I’d argue yes, in fact it’s already happening.

At kilometre 15 of the Rift, I noticed the teamwork. The Rift is sponsored by Lauf cycles, and their team Mazda Lauf with five riders at the event had moved their team up in force to the front to be first into the opening technical section. Coming from the road, when a team moved up in force it always signalled ‘shit, what don’t I know that they do?’.

Turns out they knew there was a key river crossing and going in first was a big deal, as even 10 wheels back, once you’d run through the rocky river crossing, remounted your bike and looked forward, the gaps between you and the first rider were big. One rider used this as their chance to attack and get a big gap alone in front. The chase was on from behind, but once the gap was made, because of the rocky terrain, it was a challenge. A few of us bonded in force to bring it back, but tactically, the Lauf riders didn’t contribute. And nor should you expect them to. Once we caught the rider, the race settled in, we had our front group of about 20 riders, and we were in the grind-it-out part of the race.

Later on, about 50km into the race, which felt like we’d done 100km with the heavy sandy surface and virtually having climbed this whole time, there was a feed zone approaching. Often in this discipline, when the front group is made, and there is no reason to send long-range attacks early in a race, so the group normally talks and agrees to all waiting at a feed-zone for everybody to restock. One of the team riders had to stop to tighten his cleat, and his team were going to get his food so he could just focus on his shoe so they could all leave together. I liked this. It was a cool collective moment. Gravel is nice like that.

But unbeknownst to all of us who agreed to stop, Mattia De Marchi, one of Europe’s men to beat, pushed on hard out of the feed zone. I bailed on filling bidons, grabbed a handful of gels and spent the next 10 minutes with one of the Lauf riders chasing him back.

When we finally caught him, the Lauf rider asked him what he was doing, and his attitude was like; it’s a race, I don’t have to stop. But I could read his deeper feeling which was more to say, let’s make this an even field and not let a team having numbers be an advantage. Ironic perhaps as he rides for a team himself, but I understood his sentiment.

I, on the other hand, didn’t mind either way, aside from missing a chance to refill my bidon. The difficulty of racing gravel is like no other discipline. The overall average power from a race might look lower than you’d expect, but the normalized power is ridiculous, and the torque is high as the sky. You never get to pedal easy, because if you do, you stop.

The concept of ‘sitting on’ in gravel rarely saves you much energy, and therefore protecting a rider just doesn’t have the same meaning as on the road. The reality is, if a rider gets dropped on a climb at any stage in the race, you can consider them out of contention. They might come back if the front group eases up, but at the next acceleration or climb, you can be confident they will be dropped again.

Once our groups came back together after this feed zone incident, as soon as we hit the next steep climbs, Mattia and I attacked and whoever could follow did, and those that couldn’t, simply couldn’t. I’ve been victim to this myself and it’s a hard pill to swallow. Once you’re done, you’re done, and it’s then just a long grind out for minor placings. You can’t fake it. You can’t get lucky.

Perhaps one day the depth of level in gravel will be huge, and some teams will have five of the best riders in the world, but for now, I doubt this. The cycling industry players who are all competing for the same market share will naturally divide the best riders across all of the different brands. Even if the depth increases, it only means that the best become faster, too. Gravel is too hard to race completely for somebody else. But it doesn’t change the wave: the teams are coming.

But it begs the question; What is a team? Is it a group of athletes with a collective goal? Is it a team of support? (ie: a six-person pit crew with pressure washers and F1 wheel changes) And what about when men and women are together on a team? Or essentially any different collection of riders that are entered into different categories or competitions in the race?

I can see how some may argue this will be a bad thing for the sport. I’d argue that firstly, it seems inevitable, and secondly, it all depends on how the teams are run and regulated.

The race organisers and rule makers need to start to see this change and adapt their rulebooks accordingly. A team can’t bring 20 riders to the Tour de France, and if this is the way it’s going, for the benefit of all riders, individuals and teams, it would be great to see the ‘gravel commissaires’ ensure a fair battleground.

As we rolled into the last 50km of the race, it was each rider for themselves and it was race on. The final was filled with endless attacks, close calls on loose gravel, deep water crossings and… the numbers kept going down. A group of eight turned into six, and then it was five, four, three and then we were two, facing the final sprint finish.

I dug deep, and found those last extra watts, crossing the line just a wheel length ahead. It was my first major win of the season after lots of second places. I won as a solo rider at a race with teams. So maybe there’s the lesson. Does a team help? For sure it can, but it doesn’t guarantee you the top step on the podium.

Why you still going up…#fitness #bodybuilding #shorts (@_john.noel on IG)