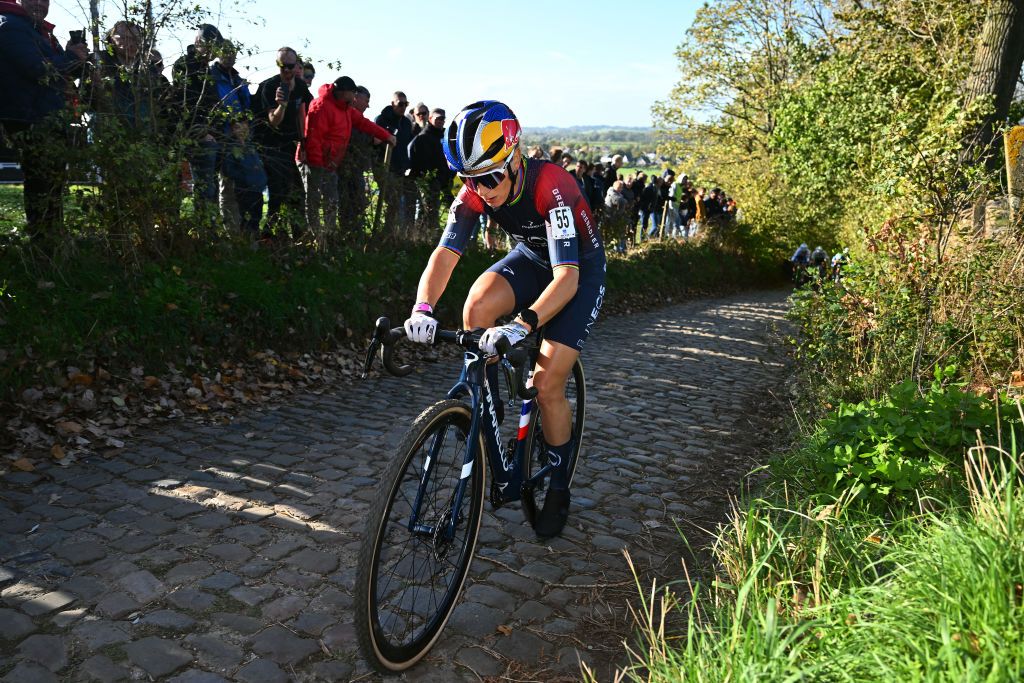 Pauline Ferrand-Prévot’s debut with Ineos Grenadiers did not go as smoothly as expected as the multi-discipline World Champion wrestled with the Shimano groupset of her new Pinarello Crossista F after a series of mechanicals at Koppenbergcross in Belgium on Tuesday.

In her first cyclocross race after a two-year absence from the discipline, Pauline Ferrand-Prévot acknowledged that she had little expectations and that racing Koppenbergcross was a training opportunity.

“Today, the first day of school. It’s going to be brutal and painful for the body, but I guess I have to start somewhere,” Ferrand-Prévot said ahead of the race as she donned her brand new Ineos Grenadiers kit with the team-issued Shimano-equipped Pinarello Crossista F with custom French colours splashed across the top of the rear triangle.

The race went beyond brutal and painful, however, and frustration mounted when Ferrand-Prévot’s chain appeared to have dropped off and then jammed on the opening lap, forcing her off her bike for at least 40 seconds to try and fix it with her hands.

Video footage showed rider-after-rider passing Ferrand-Prévot, who was riding a 2x Shimano Dura-Ace setup, as she struggled with her shifters while simultaneously trying to remount her chain onto her front chainring.

“It was my first cyclocross race, so I wasn’t sure how it was going to go,” said Ferrand-Prévot. “I didn’t have much rest after the mountain bike season, but I felt good right away. Unfortunately, I had some mechanical problems,” Ferrand-Prévot said.

A long way to the mechanic pit, Ferrand-Prévot managed to get the chain back on but had only ridden her bike for a short section of the circuit before her chain jammed again, and she dismounted and ran the rest of the course to the mechanic pit.

Ineos Grenadiers’ pit crew was positioned at the far end of the zone, so Ferrand-Prévot had to run the length of the pits to get her spare bike from her mechanic.

Forced off her bike again mid-race and then again on the last lap, Ferrand-Prévot tried to put the chain back on, but it fell off again through the final corner, in what she believes was a jammed derailleur that caused her shifting to stop working.

She then lifted her bike over her shoulder and ran up the steep slopes of the cobbled Koppenberg to finish in 12th at 6:15 behind the day’s winner Fem van Empel.

“I even thought for a moment that I wouldn’t make it, because my racing shoes slipped on the Koppenberg. My chain kept blocking. The last time the derailleur jammed, and my gears stopped working. So I put my bike on the shoulder and walked,” Ferrand-Prévot said.

The multi-discipline world champion signed a two-year contract with Ineos Grenadiers with a view toward her home Olympic Games in Paris in 2024. The 30-year-old, the first woman to sign for the British squad, will be part of the team’s growing off-road collective racing cyclocross, gravel and mountain bike.

She was also part of the France national team that won world titles in the team relays in 2014, 2015 and 2016, to add to her sparkling career.

After winning her most recent world titles in XCO cross-country, XCM marathon, XCC short track and gravel, she is aiming for a fifth simultaneous world title at the UCI Cyclo-cross World Championships on February 4 in Hoogerheide.

Ferrand-Prévot will next race at the Cyclocross European Championships on November 5 in Namur, and said that she was happy to have tested her new equipment in Oudenaarde.

“It was good to pick up the rhythm again and test the equipment. Today it didn’t work, so we still have some things to do,” she said.

Ready for ‘cross! Check out @FERRANDPREVOT’s new @Pinarello_com Crossista F 😍🦄Pauline will make her CX return today at #Koppenbergcross. You can tune in via Eurosport/GCN+ from 12.40pm (UK). pic.twitter.com/Ha7FOdelR4November 1, 2022

Taking On the S.C.A.R. Challenge: A Major Open-Water Demand

How To Combat and Prevent Pollution Damage on Hair