Molard in hospital with collapsed lung after Vuelta a España crash 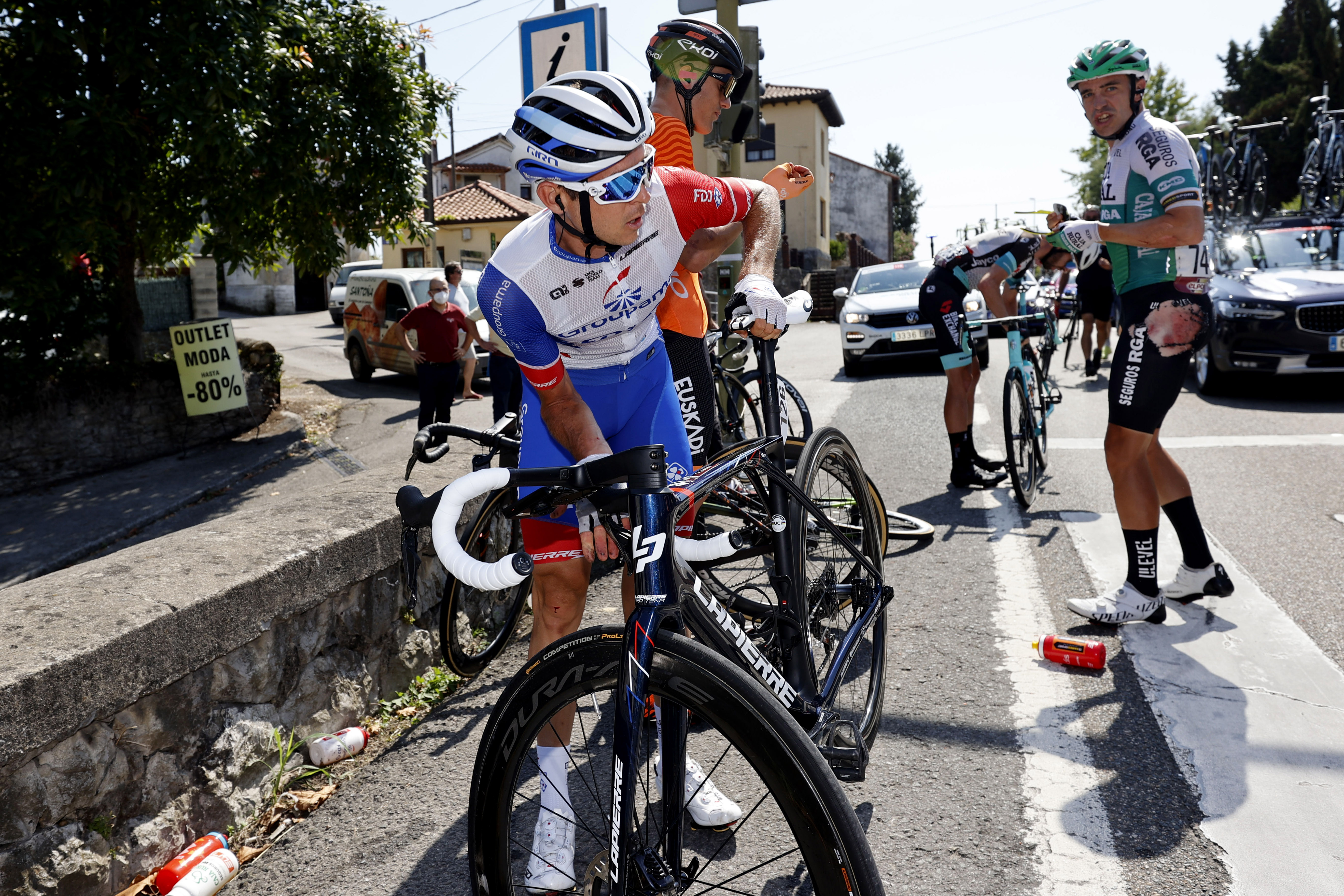 Rudy Molard (Groupama-FDJ) got caught up in a large crash on stage 16 of the Vuelta a España and while he tried to continue was ultimately forced to abandon, later diagnosed with a pneumothorax which is more commonly known as a collapsed lung.

It was in the very early kilometres of the 180km stage from Laredo to Santa Cruz de Bezana that the crash occurred, involving a large number of riders including overall contenders Enric Mas (Movistar) and Guillaume Martin (Cofidis). The ramifications of the crash could first be seen in the number of riders sporting either damaged clothing or bloody wounds and then news of abandons started to come, with Giulio Ciccone (Trek-Segafredo) and Sep Vanmarcke (Israel Start-Up Nation) unable to finish the stage, along with Molard.

“The rider of the Groupama-FDJ cycling team tried to continue the race towards Santa Cruz de Bezana,” said the team in a statement. ”Unfortunately, after a 100 kilometre-fight, the pain forced Rudy Molard to call it a day.

“The medical examinations carried out this evening have diagnosed a pneumothorax. Rudy Molard will remain at the hospital of Santander where he will be monitored.”

The 31-year-old Molard, who was riding his second Grand Tour for the year, has started 12 but has never had to abandon one before. At this Vuelta a España, his fourth, he worked his way into the break a number of times, hunting for a stage victory. He was up the road on stage 15, before being caught by the bunch on the last long climb of the day and finishing 29th. Before the crash on stage 16 he was looking ahead to the opportunities of the final week.

“It’s today’s biggest disappointment,” said Groupama-FDJ sports director Thierry Bricaud in a statement, which released before the news that Molard had been diagnosed with pneumothorax. “He still had opportunities for the end of Vuelta, through breakaways. This big crash really took its toll on him.”

“He really was courageous afterwards, because he still rode for more than a hundred kilometres. He warned us over the radio that he was in pain, and that it did not look good. We tried to support him, but he was also told not to go beyond what was reasonable. He wanted to keep going also, but the pain was too great and reason prevailed”.

Groupama-FDJ is now two riders down, having lost Jacopo Guarnieri after he abandoned on stage 9, struggling in the intense heat.

The team has not only been hunting for strong results by going on the attack, but also working to position sprinter Arnaud Démare in the fast bunch finishes. So far they’ve failed to secure a victory, with the best result a second place from Démare on stage 4, where the rider came second behind Fabio Jakobsen (Deceuninck-QuickStep). Then on Stage 16, tagged as the last stage for the sprinters, Démare was frustrated after coming over the line in 16th after hitting something on the road, unclipping and losing the chance to vie for the top places.

“It’s a hard Vuelta for us, but it’s not over yet,” said Olivier Le Gac, who helped position Démare on the stage. “We will keep being aggressive in the last stages and we will keep fighting.”

Pilates for Lower Back Pain and Better Posture