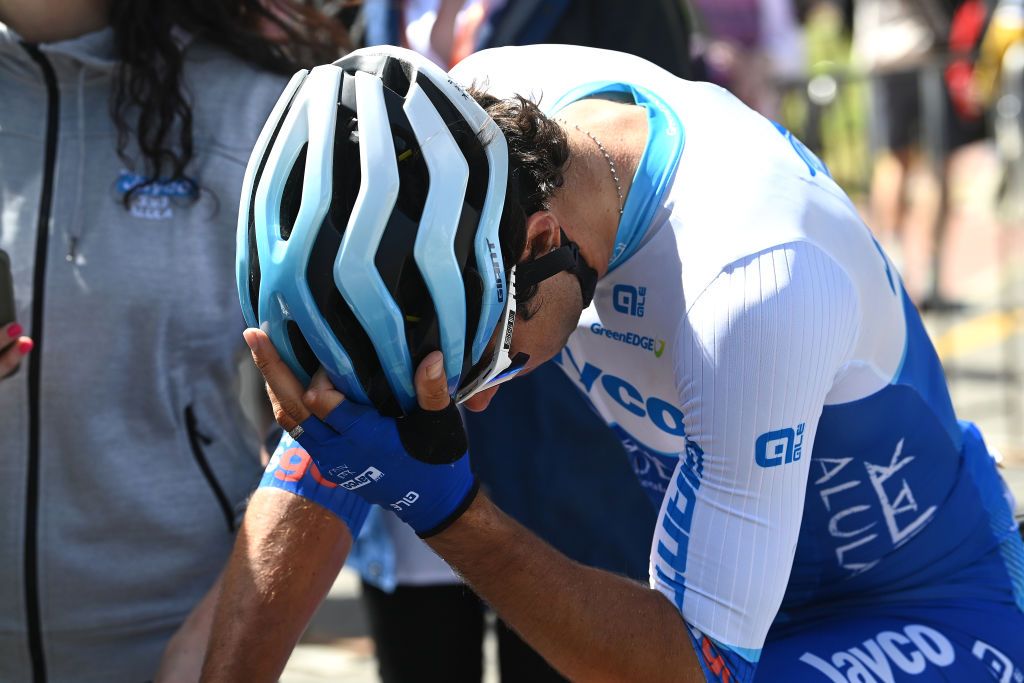 Michael Matthews lost any chance of overall victory at the Santos Tour Down Under after losing 2:13 to stage 2 winner Rohan Dennis (Jumbo-Visma).

Matthews was gutted to lose time, blaming contact with other riders in the heat of the race, with 22km to go, as the reason why he dropped his chain and had to stop to take a bike change.

Matthews and his Jayco AlUla teammates tried to chase all the way to the finish in Victor Harbor but they were unable to reduce the gap as the battle for overall victory exploded ahead of them.

Dennis is the new race leader after Alberto Bettiol (EF Education-EasyPost) was also distanced after suffering with cramps.

Magnus Sheffield (Ineos Grenadiers) sportingly apologised to the Australian after the race, admitting he bumped into Matthews and touched wheels after being bumped himself by another rider.

“I don’t know what’s happening in cycling these days, there’s no respect in the bunch,” Matthews said immediately after the stage.

“The team rode good all day, I got two good intermediate splints and some time back there on the GC guys. I was in a great position on the final climb but then I got hit from one side, hit from the other side. I dropped my chain and it got stuck between the frame and the crank, I couldn’t get it out or make my time back.

“I was lucky I had a few guys up front to help me and pull back as much time as I could but I was pretty much at my limit.”

Matthews had gained three bonus seconds in the intermediate sprints and was within touching distance of the race lead. Losing 2:13 saw him tumble out of the top 50 overall.

Yates is now 12th overall, 21 seconds down on Dennis before Friday’s hilly third stage to Campbelltown that has the Corkscrew Road climb in the final 10 kilometres.

“I’m not exactly sure where he finished, hopefully upfront, so we still have a plan B,’ Matthews said.