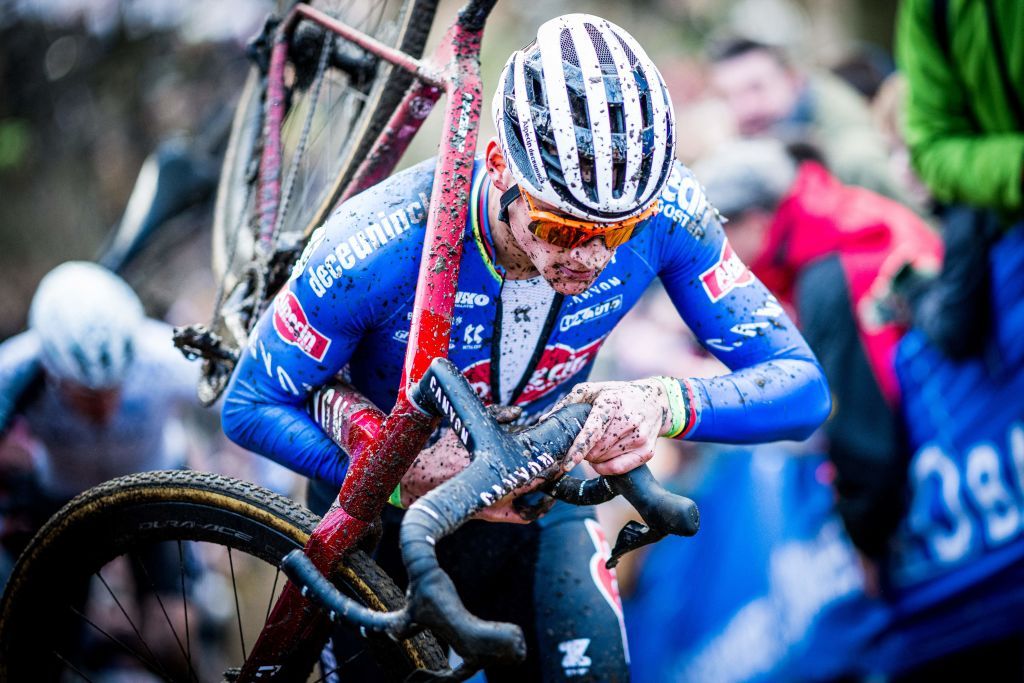 Mathieu van der Poel (Alpecin-Deceuninck) had to settle for a distant second place behind Wout van Aert (Jumbo-Visma) at the Zonhoven World Cup on Sunday afternoon, and the Dutchman admitted afterwards that he had been hindered by his lingering back injury during the event.

Van der Poel missed almost the entirety of last year’s cyclocross season with a back injury and the problem resurfaced at the X2O Trofee in Koksijde in midweek, where he also placed second behind Van Aert.

On the sand of Zonhoven on Sunday, Van der Poel was able to stay in contact with Van Aert through the early exchanges before his second crash of the afternoon allowed the Belgian to open a decisive gap on lap three.

Van der Poel was in damage-limitation mode from there on, holding off Laurens Sweeck (Crelans-Fristads) to place second, 1:23 behind Van Aert.

“Not good,” was Van der Poel’s succinct assessment in his post-race flash interview. “It’s not going how I like it. My back is hurting again and it’s a bit frustrating.”

Van der Poel suggested that the pain from his back had played a part in his crash on the sand, while it also placed a limit on his ability to match Van Aert’s pace.

“The only thing I’m thinking about is my back that is hurting, and you have to be 100% focused on the course, and I’m just not able to,” Van der Poel said. “I can maybe ride half a lap at the pace that I want, but then I have to hold back because of the pain, it’s super frustrating.”

Van der Poel will travel to Spain on Monday for a training camp on the road with his Alpecin-Deceuninck squad, with his next appointment on the cyclocross circuit coming at the World Cup in Benidorm on January 22. He is also expected to race the following weekend in either Hamme or Besançon ahead of the expected duel with Van Aert at the World Championships in Hoogerheide on February 5.

“Wout van Aert is of course also very strong, you cannot detract from that. But of course, I have to be able to compete longer,” Van der Poel told Sporza.

“Tomorrow I’m leaving for a training camp in Spain, and maybe that’s just the right time to pick myself up and work on my back. The public was a help here in Zonhoven, but it’s not fun to race ‘cross at the moment.”

Don’t miss a second of our coverage of all the action from this season of Cyclocross with a full subscription to Cyclingnews. Join now.

Goodles Mac and Cheese Tastes Like Nostalgia, but Better