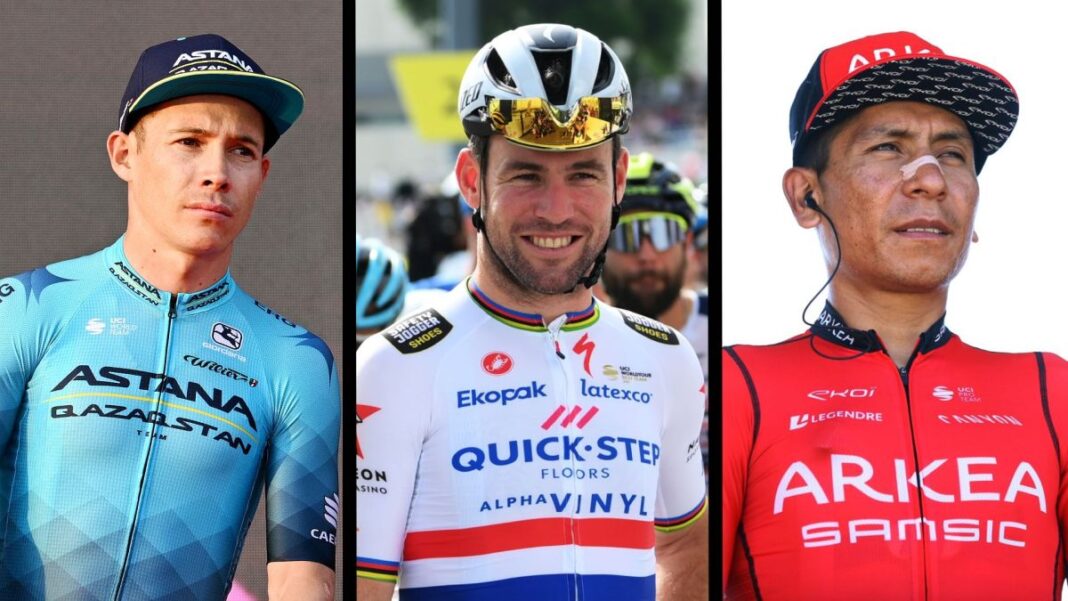 At the end of last month, Cyclingnews examined what was left of the transfer market, putting the number of professional riders still without a team for 2023 at over 100.

One month on, and just a couple of days before the new contract year, there has been significant movement, but there are still a fair few riders – including some big names – whose futures are up in the air.

The most significant development is the collapse of the B&B Hotels team, leaving Mark Cavendish still without a confirmed squad, while Miguel Ángel López has entered the market in dramatic fashion after being fired by Astana for alleged connections to a doctor suspected of doping.

Cavendish and López are intertwined, with the departure of the Colombian freeing up space and budget at Astana for the 34-time Tour de France stage winner to set up a surprising move to the Kazakh team.

A deal was reached, but it is unclear if it has been finalised, with no official confirmation as yet from the team. The deal reportedly included Cees Bol, another sprinter who’d been set to join the B&B Hotels project. Bol is managed by the SEG agency, which Cavendish moved to this spring in a bid to find a good contract – possibly the last of his career – that would enable him to break the Tour de France stage win record he currently shares with Eddy Merckx.

Cavendish and Bol were sold as a package by SEG, with Astana having to drop one of their young riders down to their development team to stick to the UCI maximum squad size of 30.

For Cavendish, Astana represents something of a last-chance saloon after his options became severely limited. Links to Israel-Premier Tech – a move that made the most logical sense – proved wide of the mark as the team picked up two B&B-bound riders, neither of them Cavendish.

Astana have never had a top-level sprinter, and there would be question marks over the lead-out unit. Bol can slot in but was billed as a sprinter in his own right for B&B, while there is simply no room for Max Richeze, the dedicated lead-out man Cavendish was going to pull out of retirement to assist him in 2023.

Richeze has not yet confirmed his future plans, but the 39-year-old could well retire after coming close last winter and only racing on a six-month contract with UAE Team Emirates in 2022.

The rest of B&B Hotels

As for the rest of the prospective B&B Hotels squad, 11 riders remain without contracts – 13 if you include Cavendish and Bol.

The rumoured WorldTour recruits have all now found teams, with Ramon Sinkeldam the first to secure a move to Alpecin-Deceuninck, followed by Israel-Premier Tech snapping up Stephen Williams and Nick Schultz.

That leaves the riders who were already with B&B Hotels and had contracts for 2023 that are now void. There were 20 riders in that position initially, and now almost half have decided on their futures. For some, that means stopping altogether, with Pierre Rolland calling time on his successful career along with Quentin Jauregui, Cyril Lemoine, Julien Morice, and Thibault Ferasse.

The rising Italian sprinter Luca Mozzato secured a WorldTour move to Arkéa-Samsic, while mountain biker Victor Koretzky moved up to Bora-Hansgrohe. The highly-rated Axel Laurence has chosen to ride for Alpecin-Deceuninck’s development team – surely with the promise of some WorldTour appearances – while Cyril Barthe is off to Spanish squad Burgos-BH and Alan Boileu drops to the third-division VC Rouen squad.

López follows Quintana onto the market

Alongside Cavendish, there is another major name up in the air in Miguel Ángel López. The Colombian was fired by Astana for alleged connections to Dr. Marcos Maynar Mariño, who was arrested by Spanish police as part of an anti-doping investigation. López denies the allegations and has threatened legal action for unfair dismissal, while team boss Alexandre Vinokourov insisted the rider had broken the team’s ‘internal rules‘.

That leaves López without a team for 2023 and leaves him in a difficult position. Even if they turned out to be unfounded, the allegations alone would, at this point, deter most top-level teams. The former Giro d’Italia and Vuelta a España podium finisher will therefore have to try and clear his name but could find himself in limbo for some time yet.

There’s another Colombian climber in a similar position, with Nairo Quintana still without a team despite repeatedly indicating his future is secure. Quintana tested positive for Tramadol at this year’s Tour de France, which, while not yet technically a doping violation, did see him stripped of his results and would carry a ban for a second offence.

Quintana had agreed on a contract extension with Arkéa-Samsic but never signed it, and he was promptly dropped as the French team prepare to hit the WorldTour in 2023. Quintana, meanwhile, has been back in Colombia, making a series of confusing statements about his future. At first, he insisted he’d be racing at the top level in 2023, although that could mean again riding for a second-division squad with access to certain Grand Tours and WorldTour races. He then suggested he’d already signed somewhere but didn’t know when the team would announce it, but later spoke of having options and entertained the idea of a return to Movistar, despite the Spanish team being full and most likely uninterested.

The pros still without teams

Cavendish, López, and Quintana are by far the biggest names without a team, but there’s also Domenico Pozzovivo, the Italian climbing veteran who is keen to continue racing despite turning 40 last month. The Italian appeared to be holding out for another last-minute deal from Intermarché-Circus-Wanty, and the team do have one more space available, but there has been no indication of a new contract in recent weeks.

There was no chance of a new deal at Intermarché for Jan Bakelants, who publicly criticised the management after being told he wouldn’t be kept on in 2023. The Belgian failed to secure a new home and has announced his retirement.

As for the second-division market, alongside the B&B Hotels riders, the names of Julien Vermote and Sacha Modolo stand out as well-known riders looking for a team. There are also a number of riders from Gazprom-RusVelo, who are still suspended due to Russia’s war on Ukraine, and Drone Hopper-Androni, who are to become a Colombia-based Continental team.

WorldTour riders still without a team

Live to 100 with these Blue Zone Lifestyle Changes