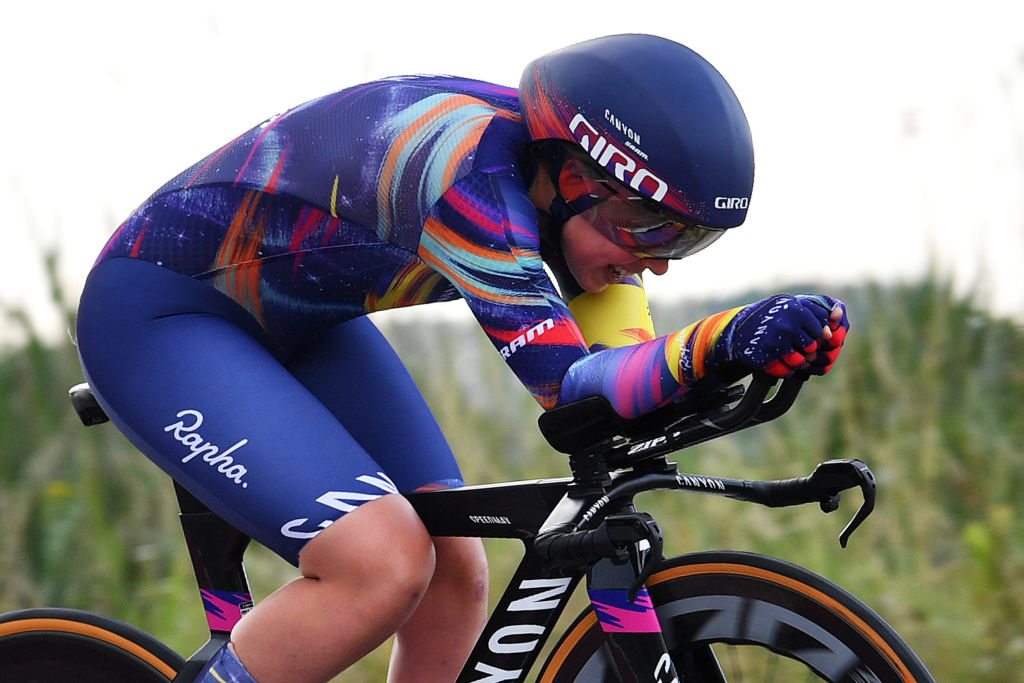 Lisa Klein will bring her powerful time trial strength to lead Canyon-SRAM at the upcoming Simac Ladies Tour held from August 24-29 in the Netherlands. Klein returns to trade-team racing after winning a gold medal in the team pursuit at the Tokyo Olympic Games.

“I’m feeling really good. It’s been such a nice time at home celebrating the gold medal with my friends, family, and community. I’m grateful for everyone’s support,” Klein said.

“I was really disappointed with my individual time trial in Tokyo because the hilly course just didn’t suit me. I’ll be looking to go all out in the prologue and time trial at the Simac Tour this week.”

Klein had a strong early season with sixth overall at the Healthy Ageing Tour, third at Nokere Koerse, fifth at Scheldeprijs this spring. She then went on to win the prologue and the stage 2b time trial before taking the overall title at the Baloise Belgium Tour in July.

At the Tokyo Olympic Games, Klein represented Germany in the individual time trial where she finished 13th behind gold medal winner Annemiek van Vleuten (Netherlands). Turning her attention to track racing, she went onto to secure the gold medal as part of Germany’s women’s team pursuit squad, beating Great Britain in the final round, clocking 4:04.249. The team also included Mieke Kroeger, Lisa Brennauer and Franziska Brausse.

The Simac Ladies Tour will favour the strong time traillists in the peloton because the six-day race opens with a 2.4km prologue in Ede and includes a second 17km time trial on stage 2 in Gennep. The remaining stages are relatively flat and expected to be sprints with the final two stages, which were initially billed as selective parcours, were altered to circuit-style races.

Canyon-SRAM bring a strong roster that also includes Kasia Niewiadoma, who also competed at the Tokyo Olympic Games and is always considered a GC contender for the team, along with Alice Barnes, Hannah Barnes, Ella Harris, and Alexis Ryan.

Barnes, who finished third on an uphill sprint stage 1 at last week’s Ladies Tour of Norway, has recovered from a short illness and is ready for the Simac Ladies Tour, according to a press release.

“I had some recovery days after Norway and am feeling I’m coming back into form for this week’s tour. The first and third flat sprint stages suit me well,” Barnes said. “As a team, we can aim for podium results every day and we should be up there in the general classification, too.”

Walmart teams up with Ford to test self-driving deliveries